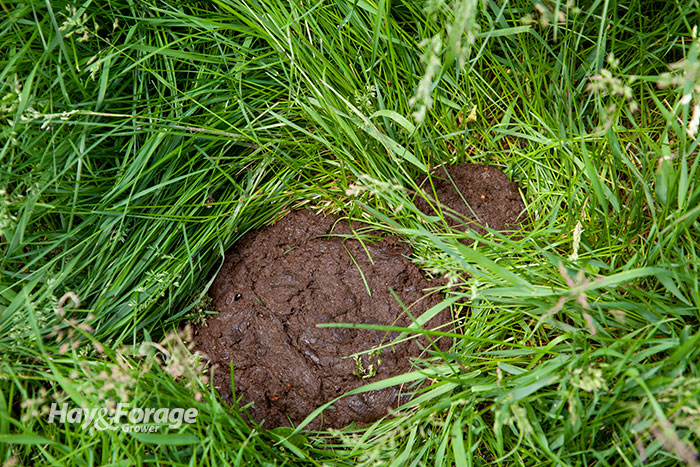 Cattle-ingested forage seeds can potentially pass and disperse across pastures, but the journey through the digestive tract is hazardous for the seeds.

While past studies show that this natural process of overseeding works, the rates of viable seeds producing plants are extremely low, which is why University of Arkansas Extension Forage Specialist John Jennings prefers frost seeding to feeding seed to cattle.

Jennings cites a 1991 Auburn University study that examined the potential of livestock to spread and establish tall fescue. Researchers found that steers fed toxic fescue seed could pass the seed with live endophytes in their manure for up to 38 hours. However, the recovery rates of these seeds were staggeringly low: viable seed was only 11.6% of the amount fed and, of that, 1.6% contained live endophytes.

Researchers then fed red clover seed to steers and found that the germination rate dropped from 96% to 14% after passing through the digestive tract.

“Few seedlings survived,” Jennings said. “In contrast, the researchers found that when red clover was frost seeded, 20 seedlings per square foot became established in pastures. So, establishment rates for feeding seed were 95% less than for frost seeding.”

In another 2007 study, Jennings successfully no-tilled white clover into strips of fescue pastures. At a seeding rate of 8 pounds per acre, 25% of the pasture area was strip-seeded; this rate was four times greater than the normal recommendation.

With successful stands in the strips, the pastures were rotationally grazed for two years. After this period, the areas between the planted strips had filled in with clover as well.

“It’s unknown how much clover seed was consumed and moved by the cattle over both years, but I suspect the total amount was fairly high and dispersal occurred throughout each grazing season,” Jennings explains.

“All of these studies showed that grazing animals can spread small amounts of viable seed that can become established in pastures,” he said. “But germination rates after passing through the digestive tract were in the range of 11% to 14%, and red clover seedling survival rates were about 95% lower than for direct planting methods.”

While natural processes are free and will help spread seed throughout a pasture, it is generally not an efficient use of resources.

Mitigating methane with feed and microbes Next