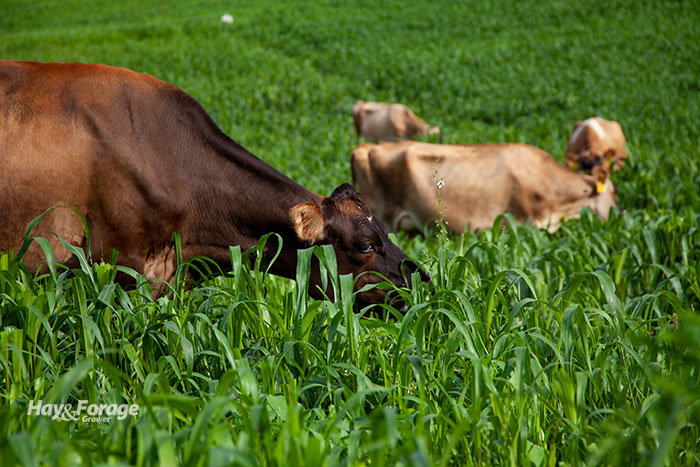 It’s officially fall. A few in the far North have perhaps already experienced a killing freeze or heavy frost. For most, it’s yet to come.

As the hours of sunlight get shorter, I have always felt the need as an extension agent or editor to write an obligatory article on the cautions and perils surrounding prussic acid poisoning, which is brought about by feeding or grazing freeze-damaged sorghum species. Many others have done the same.

About 10 years ago, I randomly began asking various forage experts if they had ever had personal experience with a livestock farm that lost cattle to prussic acid poisoning. This was no official survey, simply something I would bring up in conversation. Not one person I talked to had indicated they personally knew of a prussic acid situation that resulted in dead cattle . . . until this year, when I finally got an affirmative.

So, what did this exercise tell me?

First, prussic acid poisoning is either vastly overrated as a concern or the wide-reaching educational efforts put forth by the industry each fall have been extremely effective. Perhaps both of these things are true.

Second, prussic acid is more than an imagined threat to cattle. It can occur, even if it’s rare. The growing number of acres of sorghum, sorghum-sudangrass, and sudangrass, especially in the North, enhances the odds that someone will have a bad day because of feeding or grazing recently frozen or drought-stricken plant material that’s initiated new growth.

The prussic acid poisoning story begins in the plant with a compound called dhurrin, which is normally bound and nontoxic. If plant tissue is damaged or compromised, dhurrin is transformed into hydrocyanic acid, which is also referred to as cyanide or prussic acid.

Plant parts differ: Prussic acid concentrations are highest in newly formed leaves and young plant tissue such as new tiller growth. This is the type of growth seen following a good rain event that was preceded by drought conditions. Such new plant tissue is also present in younger stands, those less than 18 to 24 inches in height.

Further, when a field is frosted to the point that plant tissue is injured, not only does the frozen plant tissue increase in prussic acid, but grazing animals will preferentially graze new tiller growth, which also has a high concentration.

Utilization differs: Although uncommon, if the sorghum forage is going to be dried and baled, prussic acid concentrations decline by as much as 75% during the wilting process. Making sorghum or sudangrass silage also is relatively safe if the forage is not fed for six to eight weeks, which is enough time for the cyanide to dissipate out of the forage as a gas during fermentation.

Grazing, either during a frost event or soon after, is the highest risk scenario because of animal selectivity for those plant parts highest in prussic acid. Greenchopping the field would offer a slightly lower risk because animal selectivity is reduced; however, feed the greenchopped forage immediately.

Animals that have consumed forages with a high prussic acid concentration can die within minutes. Prussic acid hinders the ability to transfer oxygen in the blood stream, so the animals essentially suffocate to death.

The possibility of prussic acid poisoning is not something to fear but rather to manage around. Yes, the worst-case scenario is dead cattle, but it’s a result that is easily avoided and evidently has been for many years based on my experience and that of others.

Here are the ground rules based on the three key points made above.

1. Don’t give cattle the opportunity to either graze young plants or selectively graze young plants or newly formed leaves. Keep cattle out of sorghum-sudangrass until it reaches at least 24 to 30 inches tall and sudangrass until it grows to at least 18 inches. Don’t graze immediately after a stress event such as a frost or drought. Rather, wait a week, or, better yet, utilize the field before there’s a chance of frost/freeze.

2. If prussic acid is a concern, feed dry hay before turning cattle into a field of sorghum or sudangrass. Sometimes, dilution is the solution.

3. Consider strip grazing suspect fields, using a heavy stocking rate. This will help reduce plant selectivity and force the stems to be eaten with the leaves, providing a dilution effect.

4. Harvest suspect fields as silage or hay, if possible.

5. Ensure that your fertilizer strategy is sound. Research has shown that prussic acid levels are greater in fields with low phosphorous and/or potassium fertility and those only receiving nitrogen fertilizer.

6. Test before feeding. There are laboratory tests available that will measure the concentration of prussic acid. This might only be useful for silage or where the field will be greenchopped, and feed selectivity isn’t an issue.

Finally, the best pill for prussic acid poisoning anxiety may be on the way. As documented in Hay & Forage Grower last spring, researchers at Purdue University have developed a dhurrin-free sorghum-sudangrass hybrid.

Nontraditional forages are taking root Next