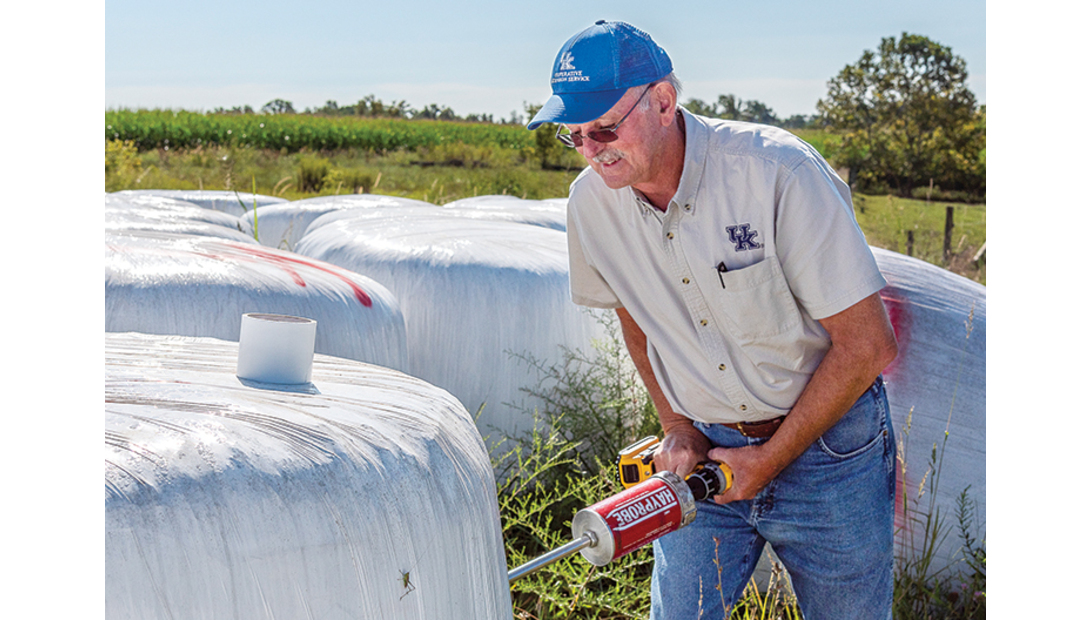 A fermentation analysis helps to identify potential feeding problems.
The author is a professor and extension forage specialist with the University of Kentucky in Lexington. 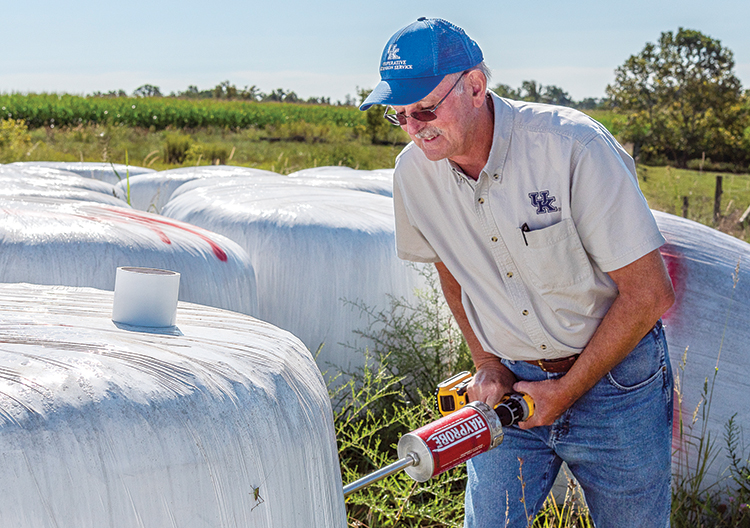 Baleage, the ensiling of wilted forage in round bales wrapped in UV-resistant, stretch wrap plastic, is a beneficial option for making high-quality stored forage in the humid regions of the U.S. The technology is well proven but not without its challenges.

Mostly, the challenges revolve around achieving a moisture content (MC) in the target range of 40% to 60%. Ensiling forage in a bale can be difficult, especially because the fermentable carbohydrates are on the inside of cells and must diffuse out to come in contact with the fermenting bacteria on the surface of the plant. For this reason, fermentation analyses will often “flag” a baleage sample as high risk compared to a chopped haylage sample at a similar moisture level because the baleage will often have a low lactic acid value and a pH level above 5.

An on-farm research study in Kentucky over the past three years collected data on the fermentation characteristics of over 100 lots of baleage with MC ranging from 20% to 80%. As a result of studying these samples and the associated production practices, what follows is a guide to interpreting baleage fermentation reports. 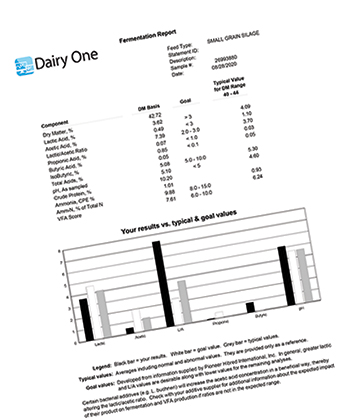 Moisture/dry matter: This value is the moisture content of the forage as tested. The MC of baleage should fall between 40% and 60% to enhance fermentation and to inhibit the growth of clostridial bacteria. Fermentation results are better when MC is between 50% and 60%. Baleage with a MC below 50% will have limited lactic acid production and pH values usually above 5.

Crude protein: This is the estimate of the protein value of baleage, calculated by measuring nitrogen (N) content and multiplying by 6.25. Higher crude protein values are associated with early-cut forages (vegetative to early reproductive stage) and often indicate a higher level of readily fermentable carbohydrates.

Lactic acid: This is the product of anaerobic fermentation of soluble sugars and carbohydrates by lactic acid-producing bacteria such as Lactobacillus plantarum. Lactic acid values of 3% or greater are desired in baleage (dry matter [DM] basis). Lactic acid values are frequently below 3% in baleage and are generally lower than in chopped haylage for reasons explained previously. Lactic acid should be the dominant acid in well-fermented baleage, present in greater quantities than acetic, propionic, and butyric acid.

Acetic acid: This organic acid, coupled with lactic acid, should constitute most, if not all, of the volatile fatty acids in baleage. Acetic acid inhibits yeast and mold growth and helps keep baleage from spoiling during feeding. Concentrations of acetic acid should be between 1% and 4% (DM basis) and, ideally, no more than half of the lactic acid present.

Propionic acid: Levels for this organic acid should be less than 1% (DM basis). High propionic acid levels indicate that insufficient sugar was available for fermentation.

Butyric acid: No more than 0.5% (DM basis), and ideally less, is the recommended level for butyric acid. Cattle intake has been shown to be depressed by as little as 0.3% butyric acid. Elevated concentrations means the baleage has undergone secondary fermentation by clostridial bacteria. High butyric acid levels are associated with very wet forages, forages contaminated with soil or manure, and mature forages that do not undergo a rapid pH drop.

pH: This is a measure of the acidity of the baleage. Fermentation of forage leads to a drop in pH due to the production of acetic and lactic acids. Ideally, baleage should have a pH of 5 or below to inhibit secondary fermentation by clostridial bacteria. However, baleage pH is commonly above 5. Values of 5 or above are not necessarily a cause for concern unless other problem markers are present, such as high moisture content, high butyric acid levels, and/or high ash content. 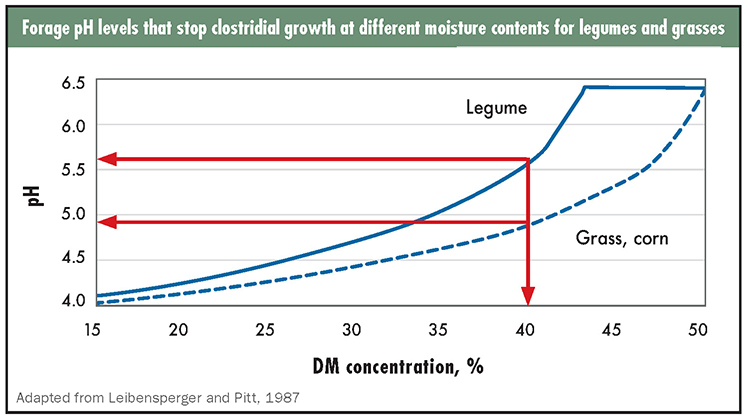 The pH necessary to inhibit clostridial fermentation depends on the type of forage (grass or legume) and the moisture content of the baleage. Clostridial growth will be inhibited at a higher pH for legumes than for grasses (see figure). Clostridial bacteria are also inhibited by a MC below 60%.

Ammonia, crude protein equivalent: This is the amount of ammonia (NH3) present in baleage expressed as crude protein. Some ammonia in baleage is acceptable. Excessive amounts are an indication that clostridial fermentation has taken place.

Ammonia-N, percent of total N: This is the proportion of the total nitrogen present in a forage that is ammonia. Ammonia-N levels above 15% indicate clostridial fermentation has occurred. Elevated ammonia levels are usually associated with high butyric acid levels.

Ash: This is the fraction of the forage that is inorganic minerals. Standing forage is about 8% to 10% ash (DM basis). Elevated ash content (greater than 11%) indicates that the baleage has been contaminated with soil.

Excessive soil in baleage can arise from aggressive raking, soil splashing caused by rain during curing, and from flood damage. Small grains and tall-growing summer annuals are prone to elevated ash content because they are often planted in rows with bare soil in between. These crops typically produce heavy windrows requiring aggressive raking, which tend to move more soil into the forage, elevating the ash content. Ash is not generally reported in a fermentation analysis, but it is on a standard forage quality analysis.

To assess the quality of baleage fermentation, your observations can tell you a lot. Good baleage will not have an off odor, while high butyric acid baleages can have a very putrid odor. Bales that squat or that have effluent seeping out are likely excessively wet and have undergone undesirable fermentation. Finally, bales that have holes in the plastic, particularly those formed soon after baling, will lead to poor fermentation in that area and may be prone to causing botulism in livestock.

To assess the damage caused by holes, it may be necessary to take multiple samples at and around the damaged area. It is far safer to discard bales where the holes have allowed significant air infiltration. The worst case of botulism in cattle that I have ever encountered came from feeding a row of bales wrapped with an inline applicator that had a significant gash in the plastic mid-row. Cows did not experience a problem until reaching the compromised bales.

Baleage is a valuable option to allow harvest of high-quality feed while avoiding rain damage. Even though ensiling parameters for baleage are generally less desirable than in chopped haylage with the same moisture content, a fermentation analysis plus careful observation can be very helpful.

Baleage with a MC between 40% and 60%, cut at an early maturity, and baled tight and wrapped with six layers of plastic will generally ferment well enough to be stable through one feeding season. High moisture, elevated butyric acid levels, ammonia N above 15% (as percent of total N), ash content above 11%, bad odors, and holes in the plastic are all indicators that baleage has a high probability of causing feeding problems, even botulism.

This article appeared in the January 2021 issue of Hay & Forage Grower on pages 10 and 11.

It’s true for RFQ, too Next

Don’t leave your forage on the grill too long Previous