By Greg Halich
The author is an extension agricultural economist with the University of Kentucky and a grass-finishing cattle farmer in central Kentucky. 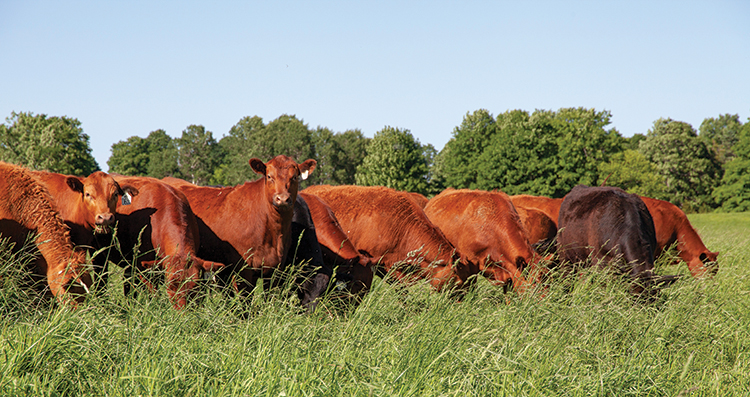 As an extension economist for the College of Agriculture at the University of Kentucky and also someone who has been finishing cattle for the past nine years on my own farm, I have had the opportunity to work with hundreds of farmers in Kentucky and other Eastern states. I have finished nearly 200 cattle myself, and what follows are my personal and professional observations for the key steps to establishing a profitable grass-finishing operation.

Plan and develop a finishing system

Many people try to finish cattle on pasture simply by keeping some of their calves and waiting until they are ready for market. While this might work in some situations, having a reasonably good idea of how those calves will grow and building a production system so that they will be finished in conjunction with your marketing needs is a better long-term strategy.

It will usually take cattle over two years to be well-finished on an all-forage diet (no concentrates, including soyhulls), thus, we are talking about multiyear planning. For most people, developing a production system will involve a fair amount of trial and error to find out what works, but coming up with realistic estimates is still needed to put you in the ballpark of when animals will be finished.

Different regions of the country will have different finishing systems that work efficiently. For example, in the Deep South, cool-season annuals grow well throughout the winter and can provide a perfect forage for finishing cattle. In the Fescue Belt, early summer or late-fall finishing on perennial pastures works best to avoid the worst effects of fescue toxicosis during the heat of the summer. In the Northeast, cooler summer climates combined with a lack of fescue allows for potentially efficient finishing throughout the summer.

It’s always advisable to talk to other farmers in your area who are grass-finishing cattle to get ideas for systems that may work. Determine the age and final weight of the animals when finished. If they are finishing on a mostly perennial pasture system, and the animals are being harvested under 24 months, be skeptical of their system.

For moderate-framed animals, you will want carcasses in the 675- to 800-pound range for steers, and 625 to 725 pounds for heifers. From my experience, most animals are being harvested either below or on the low side of these ranges. So, ask a lot of questions and verify the numbers to ensure animals are being finished at an acceptable weight. In the end, you will likely have to make adjustments to your original finishing plan, but you will need something to guide your planning process.

In almost every finishing conference or meeting that I’ve attended, forages seem to be the focus of the presentations and discussion. Forages are obviously important to finishing cattle, but, in my opinion, they are less important than your grazing plan for whatever forage base you may already have. Too many people become fixated on finding the magic forage species for finishing cattle and take their eyes off of other important components such as developing a realistic finishing system (my first key) and improving their grazing management.

The biggest mistake I see with grazing management is making cattle clean up too much of the pasture. To gain well, finishing cattle need both excellent forage quality and also the ability to maximize forage intake with every bite. The longer cattle are left on a pasture, the worse both of these factors become. This does not mean you need to move cattle every day. Moving cattle every day but not allocating enough pasture will give you poor results. In general, one- to three-day moves combined with appropriate-sized paddocks will be the best compromise between labor and grazing efficiency on most farms.

Grazing management is more of an art than a science, and it is somewhat futile to give prescriptive instructions. You will need to develop your grazing “eye,” but until you have done that well, move the cattle quicker and give larger pasture allocations than you might think are necessary. It is better to give them too much feed than too little.

A mature cow has an amazing amount of buffering for short periods of poor-quality forage through utilizing the fat on her back. With finishing animals, your primary goal is to put that fat on their backs, not take it off by forcing them to clean up pastures.

Another mistake I see many finishers make is having an excessive stocking rate. It is difficult to be overstocked from mid-spring to early summer when forages are growing quickly, but, by midsummer, stocking rates that are too high will start creating problems. When forage availability drops below a certain threshold, gains start plummeting (see my second key).

Once forage growth slows down, being overstocked will compel you to rotate too quickly and force the cattle to clean up too much of the pasture. Once you get to this point, it is difficult to recover for the rest of the grazing season.

It is hard to provide prescriptive stocking rate numbers (acres needed per finishing animal) due to differences in rainfall, soil productivity, grazing management, finishing systems (how long you will keep the animals), and so forth. However, during a year when rainfall is slightly below average, if available forage becomes limited by mid-summer, your pastures are overstocked.

When forage availability is compromised, gains will quickly drop, and the remaining pasture resources will become stressed due to overgrazing. Even with normal rains in the fall, gains will likely be low due to forages that haven’t had adequate recovery time. This is the beginning of what I refer to as the downward spiral of overstocking.

Having a low to moderate stocking rate is particularly important if you have a finishing system that requires good gains during the fall. As previously noted, acceptable gains require both good forage quality and enough quantity for cattle to have a high intake.

The quality of cool-season pastures can be exceptional once temperatures moderate in early fall, but if pastures have been overgrazed, it will be difficult for you to get forage density to the point where intake is high. Finishing systems designed to have a portion of the animals harvested by early to midsummer will help reduce the effective stocking rate for those periods when forage availability is most limiting.

Learn to work at nature’s pace

Many people think cattle can be finished on pasture in 18 to 22 months. Don’t believe it — not if your definition of finished means good marbling (USDA Medium Select or above), anyway. The only instance I have seen where animals were well-finished in this 18- to 22-month time frame is in the Deep South, where animals are on annuals during the entire postweaning period and were finished on cool-season annuals during the fall and winter. They were getting decent marbling, but, even in these situations, they had steer carcasses in the 600- to 650-pound range. For maximum profit on medium-framed steers, I like to see at least 700-pound hanging weights, with 750-pound carcasses preferred.

I believe that the 18- to 22-month finishing target has been perpetuated by misinformation from so-called “experts” and by an embarrassment factor on the producer side for not realizing what appears to be an achievable benchmark. If we as grass-finishers hear that everyone else is finishing their animals in 18 to 22 months, we think we should be able to do the same. When we fail to have good finish on our animals at this point, we blame it on cattle genetics or management decisions.

It becomes difficult to publicly challenge this paradigm and risk other people thinking we are incompetent if it is taking us 25 to 30 months. As a result, the myth continues, and we have more and more farmers who become frustrated with grass-finishing when they try to harvest animals before they are 2 years old.

On my operation, steers are generally 26 to 30 months old at harvest, with some going as long as 32 to 33 months. However, these steers have carcass weights of 700 to 825 pounds with roughly half grading USDA low Choice or higher. You will not find those kind of numbers on a 18- to 22-month old steer that was not heavily supplemented with concentrates. An 18- to 22-month old steer is not physiologically mature, and we are trying to work against nature to finish it in this time frame. Yes, we can do it with a near 100% grain-finishing diet, but that is not the system we desire. If you are trying to finish on an all-forage diet, the key is to learn to work with nature and not fight against it with unnaturally high gains. Nature almost always wins.

In my opinion, finishing cattle on pasture is an enterprise that you do not want to jump into quickly. Finishing cattle, just like grazing decisions, is more of an art than it is a science. You can follow a prescriptive protocol for finishing cattle with grain, and assuming you follow the directions, have fairly reliable and predictable results. This is not the case for grass-finishing cattle. There is too much variability and subjectivity in the process. Thus, my recommendation is to start small and to grow slowly.

It is possible to sell grass-finished cattle to aggregators who buy finished animals from you and do all the marketing, but most grass-finished producers market their own finished product either as freezer beef (selling quarter, halves, and full animals) or by selling retail cuts through farmers markets or in on-farm stores. In these cases, it is common for production to get ahead of the marketing, with animals that are finished but no market to sell them.

Selling finished beef directly to consumers involves a lot of steps and the learning curve will be steep for a few years, not just with production, but also with marketing and processing. Starting small and ramping up production slowly gives you time to learn and make mistakes without catastrophic consequences.

This article is meant to be a beginning primer on some of the most important points for grass-finishing cattle. For more details, see the joint University of Kentucky and University of Missouri extension publication, “Producer’s Guide to Pasture-Based Beef Finishing.” This 45-page guide goes into much greater detail on pasture-based finishing and is available at: bit.ly/HFG-grassfinish.
Also, the author has two videos on grass-finishing production from an August 2020 webinar:
Grass-Finishing Myths: bit.ly/HFG-myths
Systems for Grass-Finishing: bit.ly/HFG-grass-systems

Develop an effective forage program Next