By Mike Rankin
The author is a beef systems specialist, University of Nebraska. 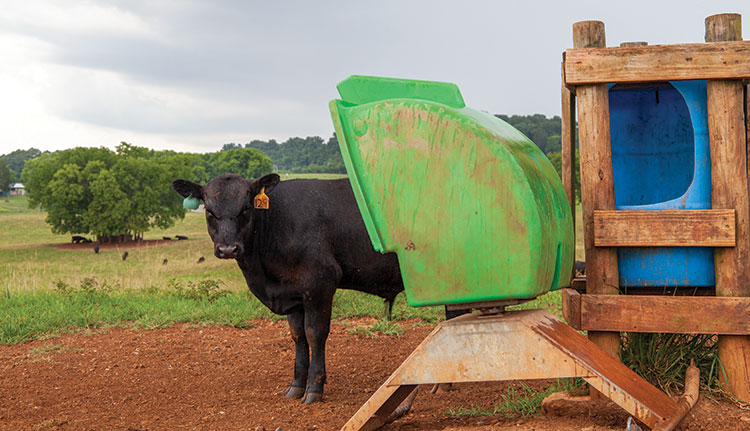 Thinking about mineral supplementation programs as being similar to insurance can help with determining what program is right for your operation. With a bit of information, one can get a good idea of “risk” and decide how much potential coverage you want to buy. In some cases, the risk might be fairly low and, in other cases, a program with more coverage may be needed.

In general, copper and zinc are the two trace minerals that are likely to be deficient in most forages. Recently, I had the opportunity to work with a commercial forage testing lab in Nebraska to look at all the forage samples analyzed for minerals from 2012 through 2019.

Of the perennial grass (hay and pasture) samples submitted to the lab, most would not have met a cow’s needs, with 80% having less than the required 30 parts per million (ppm) of zinc and 90% having less than the required 10 ppm of copper. For zinc, 50% of the samples had concentrations between 15 to 25 ppm. For copper, 50% of samples had only 5 ppm or less.

Regardless of where you are located, there is a good chance you need to provide supplemental zinc and copper when grazing and feeding perennial grass hay, as proportions of samples from a nationwide survey look very similar to this Nebraska data. Manganese, however, can often be at or above the 40-ppm requirement for cows in perennial grasses, and thus, some operations choose not to provide it. Of the perennial grass and hay samples submitted for testing in Nebraska, 80% were at or above the manganese requirement of a cow.

Normally, the minerals in soil that may be on the surface of a forage are not available for absorption by the animal. Thus, when it is consumed, it just passes through the animal into the manure. However, the ensiling process can make the iron that is from soil contamination available for absorption, and thus, able to interfere with absorption of manganese and, to some extent, zinc and copper. Additionally, corn silage can be naturally low in manganese.

In the samples submitted to the Nebraska lab, the average manganese was very similar to the national book value at 34 ppm. However, only 30% of the corn silage samples would meet a cow’s manganese requirement. Of those that would meet the requirement, 50% of them had iron levels at 200 ppm or above, suggesting that iron would negatively impact manganese absorption. Bottom line: A high proportion of corn silage would need supplemental manganese to meet the cow’s needs. Of course, testing your own corn silage can help you know where your situation falls and decide how much manganese insurance you want to buy.

There are regional differences in mineral content of forages and local or regional “risks” that need to be considered. Data from forage samples taken across the nation has shown that copper, zinc, and manganese tended to be higher in the Southeast than in the north central, central, south central, and western U.S., while selenium tended to be lower. However, selenium is a mineral that seems to be quite variable. Some locations have extreme deficiencies and others have issues with potential toxicity.

Some locations have high molybdenum in the soil, which can tie up copper in the diet. Water can also be a major source of potential issues, high sulfur in the water can reduce the absorption of copper and high iron in water can interfere with manganese, zinc, and copper. Testing your forage and water sources can always help you see where you stand. Also, someone from your extension office can likely provide guidance as to common issues and needs for the area and help with interpreting your test results.

The answer is usually a bit of science mixed with art. This is because even when you have a mineral analysis of the forage that is being used, determining what to supplement is not as simple as calculating the amount of a mineral you are deficient in and finding a mix that will provide that. First, not all the minerals in the forage will be available for absorption. Some, for instance, may be tied up in the matrix of the fiber and pass through the animal without being absorbed. Unfortunately, there is not enough information to truly predict how much is available.

A general rule of thumb that a lot of nutritionists use is that only 50% of the trace mineral is available. However, we still have to account for antagonisms where minerals interact and interfere with each other. If, for instance, you have any of the antagonisms in your forage or water that were discussed earlier, you may actually have to supply more than 100% of the requirement. This will ensure that you get enough of the mineral that is being interfered with to be absorbed and meet the animal’s needs.

Copper is one mineral that has many potential antagonists and often must be supplemented at or above the requirement for the cow herd to maintain adequate status. Another issue in free-choice mineral intake is that some animals eat more than the targeted amount while others may eat less. However, understanding how much a mix is providing of a certain mineral can be useful when making decisions.

Inorganic minerals such as copper sulfate can often meet the animal’s needs, if the right concentrations are included in the mineral mix. One advantage to organic minerals is that they tend to be less affected by antagonisms, such as high iron, molybdenum, or sulfate that can tie up minerals. So, if you have high levels of these potential antagonists, then using a mineral with a portion of the copper supplemented being from an organic source may be beneficial. However, given that they often cost more, they would be akin to a premium insurance program •

This article appeared in the August/September 2020 issue of Hay & Forage Grower on pages 26 and 27.

From flush to slump Previous