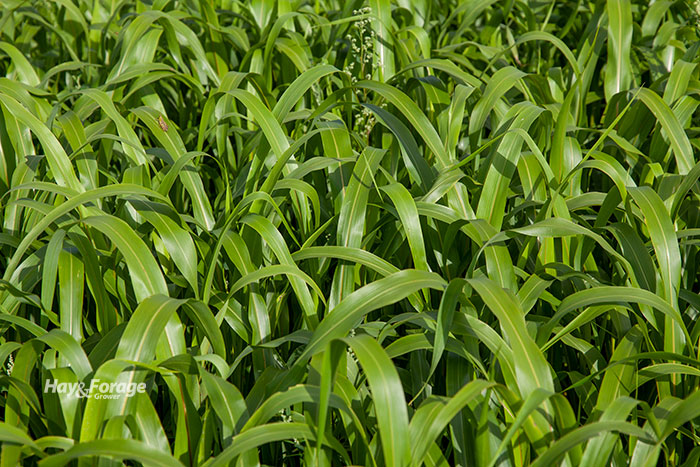 The family of sorghum crops was once considered fodder for those who farmed in more arid regions of the U.S. and really had few other mid-summer forage alternatives.

That line of thinking has gone the way of rotary-dial telephones.

Sorghums are now being planted from coast-to-coast and border-to-border, even the border that separates the U.S. from the country with a cool, red maple leaf on its flag.

These days, there are companies that specialize in sorghum breeding and are bringing products to the market designed specifically for more Northern adaptation and performance.

The advances aren’t just being made with traditional one-cut forage sorghums; they are also occurring with sorghum-sudangrass hybrids and sudangrass. These versatile grasses are being chopped for silage, wrapped into baleage, and grazed. Recently, I ran into a producer who was even brave enough to try and successfully make dry hay.

Both one-cut and multi-cut systems of harvest are options across the forage species spectrum, although most research has shown that a single-cut strategy will result in the highest yields and lowest forage costs.

The number of options available for selecting a sorghum species now rivals those available on a new pickup truck. There are single-cut sorghums bred specifically for forage and the brown midrib (BMR) trait is available across all the product lines, including sorghum-sudangrass and sudangrass.

Photoperiod-sensitive lines are also an option. This trait keeps plants in a vegetative state much longer, allowing for higher forage quality and a wider harvest window.

Another choice in forage sorghums is the brachytic dwarf trait. These hybrids have shorter stalk internodes, which result in a leafier plant. Some brachytic dwarf hybrids are available with the BMR trait. Before buying sorghum seed, it pays to do some homework and figure out what types will perform best in a specific forage system and at a given latitude.

Perhaps sorghum’s best characteristic is its ability to perform when other cool-season forages are withering under summer’s heat and dryness. As such, sorghum species of all types have proven to be a feed-source savior during droughty summers, offering utility for producers who both mechanically harvest or graze the crop. Sorghums fit well into a winter and summer annual double-crop system.

Of course, sorghum species do come with some warts. In the South, sugarcane aphids have become a major pest issue. Hybrid selection and other mitigation strategies can lessen their impact.

For Northern farmers, the largest obstacle comes when an unusually cool summer occurs. Although sorghums are superstars when the weather is warm, just the opposite is true when temperatures drop. Growers also need to be cognizant of prussic acid and forage nitrate issues in certain situations.

Boost your odds for success

“The first critical step for successful sorghum is to plant in soils that are at 65°F when the forecast for the next week is for increasing temperatures,” asserts Tom Kilcer, a crop consultant based in Kinderhook, N.Y.

Planting depth also can mean the difference between establishing a successful stand or not. The target depth is about 3/4 to 1 inch. Matt Atkins, a dairy nutritionist with the University of Wisconsin who has done considerable sorghum research, cautions against seeding sorghums into clay soils just prior to forecasted significant rainfall. “Our experience is that soil crusting can drastically reduce emergence,” he notes.

Kilcer suggests drilling full-season sorghums in narrow rows or planting in 15-inch rows or less. This will maximize sunlight interception early in the growing season.

To control weeds in full-season forage sorghums, Kilcer recommends buying seed treated with a safener and using atrazine plus metolachlor or another registered grass control herbicide. “The absolute key is to spray as soon as you get done planting,” he says. “Delaying will allow the annual grass to get started in the warm soil and the herbicide may prove ineffective.”

Kilcer has also completed trials with the smaller seeded sorghum-sudangrass planted at higher seeding rates. He bumped up the seeding rate to about 60 pounds per acre and obtained high yields with no weeds. Yields equaled or even exceeded that of sorghum, he notes.

Finally, don’t forget about nitrogen and potassium fertilizer. Similar to corn, sorghum is a grass plant that needs both. Kilcer also recommends that some sulfur be applied along with the nitrogen fertilizer.

Sorting out some sorghum decisions Previous