Alfalfa puts carbon in its place 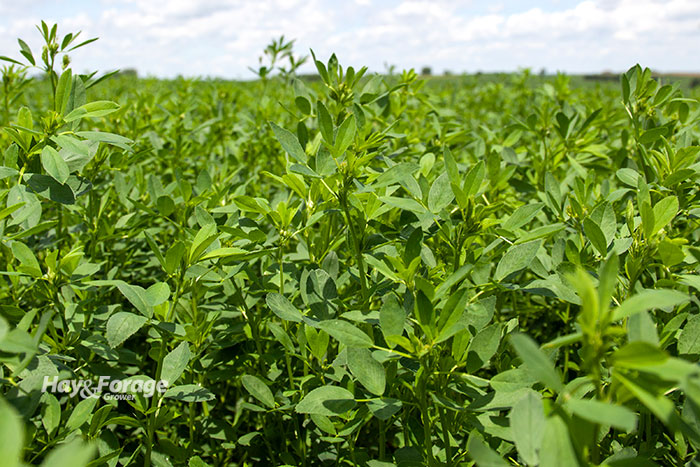 It’s no secret that alfalfa is a valuable forage. The crop is notorious for its nutritional quality, offering high levels of crude protein and an array of vitamins to many species of animals. Alfalfa ranks as the fourth most widely grown crop in the U.S. and has an annual estimated value of nearly $11.7 billion.

What may be lesser known, though, is alfalfa’s impact on carbon balance in the atmosphere. While it is already appreciated for its nutritive and economic contributions to the agricultural industry, alfalfa has yet to be recognized for its significance to the environment.

Scientists with the Agricultural Research Service’s (ARS) Northern Great Plains Research Laboratory in Mandan, N.D., conducted a five-year study to examine carbon flux – the exchange of carbon – between the air and hayed alfalfa versus perennial grasses.

Results of the study showed alfalfa was consistently more efficient at taking up carbon than the observed grasses. Mark Liebig, one of the research soil scientists at the lab, notes that this also means alfalfa has potential to limit the amount of carbon lost from a field when it’s included in a crop rotation.

“The greater carbon fluxes in the alfalfa field equated to more carbon being taken up from the atmosphere, essentially acting as a sink for carbon dioxide,” Liebig explained. “From a climate mitigation standpoint, this is a good thing.”

Growing conditions varied throughout the five years of the study. The scientists reported one very dry year, one very wet year, and three near normal years. Even so, the fluctuating weather patterns did not seem to suppress alfalfa’s ability to capture carbon, which exceeded the perennial grasses’ ability to do so each year.

“This attribute of alfalfa was impressive,” Liebig points out. “It showed that alfalfa could keep growing and taking up carbon under suboptimal conditions. With a predicted future of more variable weather, alfalfa offers some resistance to weather-induced extremes.”

Whatever Mother Nature brings, the study suggests alfalfa is capable of sequestering carbon in crop fields and will continue to be a reliable forage source for livestock. “It’s a win-win for the producer and the environment,” Liebig asserts.

No hay barn – maybe no problem Next