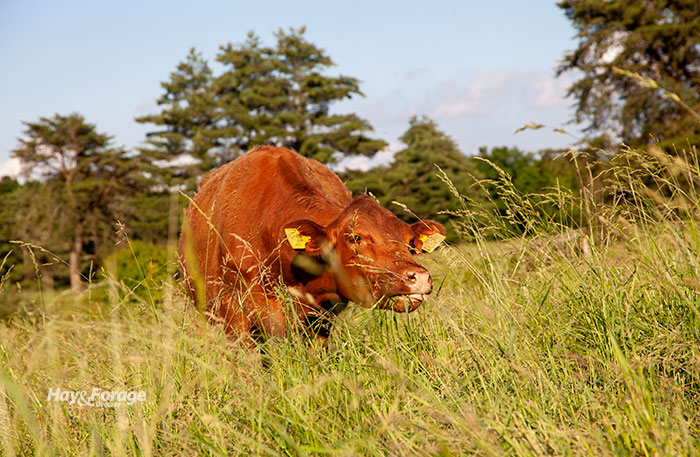 In states where livestock graze on tall fescue, grass might not be the only thing on the menu. These cattle also consume fungal endophytes that live between plant cell walls, and sometimes they can be toxic.

At the Heart of America Grazing Conference in Mt. Vernon, Ill., Craig Roberts with University of Missouri Extension and the Alliance for Grassland Renewal said although Kentucky 31 is a toxic variety of tall fescue, it is a common base in pastures because it has notably good stand persistence. Endophyte-free varieties, on the other hand, do not cause endophyte toxicosis in animals, but they lack stand persistence.

Novel endophyte varieties essentially provide the best of both worlds – they do not have toxic endophytes, and their stand persistence is similar to Kentucky 31’s. Roberts discussed factors producers need to consider before incorporating novel fescue into a grazing system.

“The birth weight can be about 30% less, weaning weight can be 56 to 110 fewer pounds, and they are not getting a good gain,” the extension specialist noted. “Typically for straight toxic fescue, the average daily gain is about a pound per day for steers.”

Another advantage to planting 100% novel endophytes is that nitrogen can be applied without any adverse effects. This can be especially helpful to producers who want to stockpile the forage.

“Converting 25% of pastureland is practical for spring calving purposes,” Roberts said. “Yet, converting to 100% novel endophytes does that and allows for high yield, high carrying capacity, and stockpiling with no penalty and no animal problems.”

The study showed that converting an entire operation would benefit more aspects of production. Even so, planting a smaller percentage of novel endophyte fescue can save pasture renovation expenses. To determine how many acres to convert, Roberts recommended testing fields for toxicity first.

“The first thing we have to do is test for toxic endophyte, and that tells us how much of the farm we need to convert,” Roberts asserted. “We do not want to be spending money renovating a field that is not very toxic.”

Fields that are less than 18% toxic are not a concern, nor do they need to be converted. When this number rises to 30% or higher, it is time to take action. Roberts explained a multi-step process to successfully incorporate novel endophyte fescue into a stand.

“At the end of the spring, go in and spray the existing field with glyphosate,” Roberts instructed. “Plant a smother crop of pearl millet or sorghum-sudan, then come back and spray in mid- to late August. After a few days go by, no-till in a novel endophyte.”

Once the novel endophyte fescue is established, Roberts warned producers to be careful not to overgraze it. He also suggested maintaining a moderate level of phosphorous.

Step up to the stockpiling plate Next