Serving up cocktails and cereal 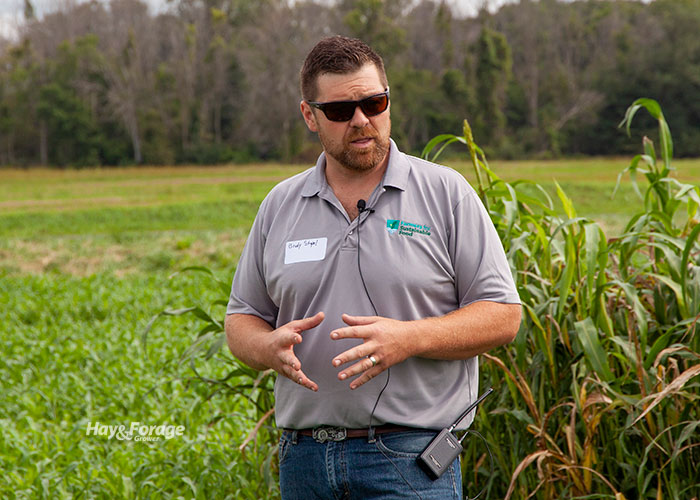 At a recent field day, Brody Stapel explained how their farm is transitioning away from alfalfa by feeding more winter cereals and summer annual forage mixtures.

Double Dutch Dairy, near Cedar Grove, Wis., began experimenting with no-till cover crops and annual forages about five years ago. “We started with clovers following a winter wheat harvest, figuring that was a safe place to begin because there were still plenty of available heat units left in the growing season,” explained Brody Stapel.

Stapel, who farms with his brother, Jory, and father, Rudy, milk 240 Holsteins in east central Wisconsin, about six miles from the Lake Michigan shoreline. Historically, they fed alfalfa and corn silage to fuel the dairy herd.

The brothers became frustrated with frequent alfalfa winterkill events, so last year they began to replace most of their acres with year-round annual forages and mixtures, or “cocktails” as they are sometimes called. Stapel noted that they were also interested in improving soil health, diversifying their cropping system, and keeping a “live” root in the soil at all times.

“We’re still learning the system,” Stapel explained at a recent field day on their farm. “It’s not just a matter of planting something different. We need to have quality feed and a means of utilizing our manure, too.”

The Stapels are currently implementing a cropping system that begins with cereal rye or triticale following corn silage harvest. Last fall, they planted in mid-September. They then topdressed about 6,000 gallons of liquid manure in late October over the 6-inch tall winter cereals.

In March, they put down about 20 gallons of 28% liquid nitrogen. They followed that up 30 days later with another 20-gallon application of 32% nitrogen. The winter cereals were harvested on May 14.

About 9,000 gallons per acre of manure was then injected into the harvested cereal fields. Part of the 90-acre field was planted to corn and the remainder was seeded to a mixture of brown midrib sorghum-sudangrass, red and berseem clover, hairy vetch, and Tetila Italian ryegrass on June 5.

A first cutting was harvested on July 17. More liquid nitrogen was applied, and it was cut again on August 16. The current plan is to harvest a third cutting in mid-September to align with their final alfalfa harvest. If growing conditions are good this fall, they might take another cutting, which is anticipated to be dominated by ryegrass and clover. The field will then receive another manure application.

Next spring, they plan to get a cutting of ryegrass and clover in May, then they will no-till corn into the field. Recently, the Stapels committed to 100% no-till for all of their crops. They feel this will improve soil health and enhance the ability of the soil to support the weight of harvest equipment, even during a wet fall.

The brothers plan to replace all of their winter rye acreage with triticale moving forward. This will help widen the harvest window for boot stage-harvested forage in the spring.

The Stapels use a custom forage harvester so that the feed can be harvested and packed as quickly as possible. With limited storage space, the Stapels layer their winter annuals, summer annuals, and alfalfa on a silage pile.

“From a feeding perspective, the biggest change we’ve seen is an improvement in milk components,” Stapel noted. “We are running about a 4.2% fat and 3.3% protein average. Previously, we’d drop under 4% fat and under 3% protein in the summer months, but that didn’t happen this year.”

The Stapels’ nutritionist, Jake Sehr, cut his dairy feeding teeth in California where a variety of feedstuffs are used in dairy rations. Stapel feels he is well suited to help guide them through their experimental phase of feeding a variety of annual forages.

“These annual forages are totally different feeds than alfalfa,” Sehr explained. “Good grasses are always going to be high in neutral detergent fiber, but they’re highly digestible. They also bring a lot of sugars, or water-soluble carbohydrates, into the diet.”

The nutritionist continued, “In a corn silage and alfalfa diet, a lot of our energy comes from starch. With more annual grass-based diets, an increasing amount of the digestible carbohydrates are coming from the fiber. Essentially, we’re feeding more leafy greens and fewer potato chips.”

When dealing with the plethora of forages being mixed and fed at Double Dutch dairy, Sehr uses wet chemistry analysis to get an accurate read on what’s going into the dairy ration. “It’s more work on everybody’s part to get this right, but it is a pretty cheap way to achieve higher milk components and still maintain production,” he asserted.

Sehr cautioned that winter cereals need to be harvested with a shorter length of cut so that they pack and feed better. “The harvest window is going to be shorter than alfalfa,” he noted. 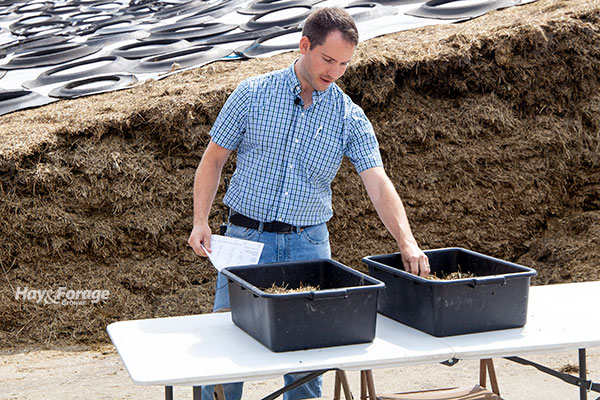 Nutritionist Jake Sehr noted that the nutrient profile of winter cereals and annual forage mixtures differ from that of alfalfa. The Stapels layer the various forage types in their silage pile.

In the spirit of next-level experimentation, the Stapels seeded a cocktail mix along with their corn this past spring on one of their fields.

Following a winter rye harvest in May, a mixture of kale, cowpeas, rape, sunn hemp, buckwheat, sunflower, sorghum-sudangrass, red clover, white clover, and Italian ryegrass was no-tilled into the stubble. Immediately following, corn was planted into the field at a population of about 25,000 plants per acre. Glyphosate and carfentrazone-ethyl (Aim) were used to burn down the volunteer rye immediately after planting.

The Stapels’ hope is that there will be immediate cover once the corn is chopped off, but they plan to continue to experiment on a small scale with different forage species and corn hybrids to find the most beneficial combination.

Sorghum is soaring Next