Give pause to prussic acid 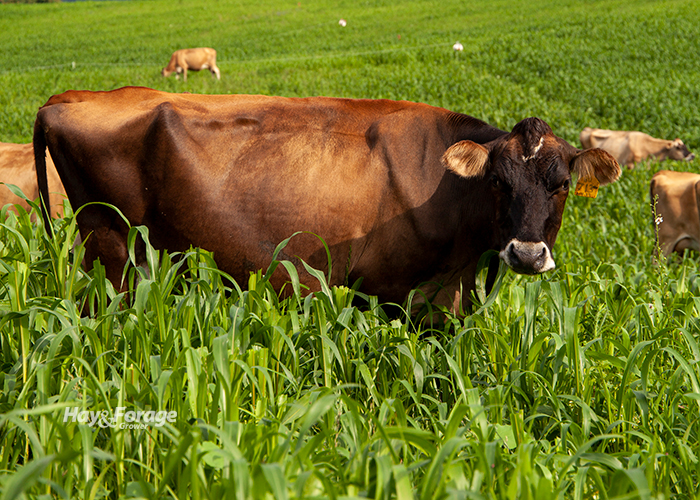 Cyanogenic compounds in sorghum species can be brought to life by a killing frost. These compounds heighten the risk of prussic acid poisoning, and livestock will suffer the consequences if affected forages aren’t managed correctly.

Leanna Duppstadt with Penn State Extension explains that cyanogenic compounds are usually found in nontoxic forms and are bound in plant tissues for most of the year. A cold weather spike can release these compounds, and when a killing frost ruptures plant tissues, prussic acid forms.

“Sorghum, johnsongrass, and shattercane contain the greatest levels of prussic acid and can still be hazardous as weeds in pure stands,” the extension educator states. “Sudangrass contains approximately 40% less prussic acid than other sorghums; however, sorghum-sudangrass hybrids contains greater levels of the toxic compound than sudangrass alone.”

Ruminant animals are more susceptible to the effects of prussic acid than their monogastric counterparts. Cattle can consume large amounts of forage, and the release of cyanide might be expedited by the microbes in their rumens. Even so, it only takes a little bit of prussic acid to wreak havoc on animal health.

“Cyanide interferes with the oxygen-carrying function in the blood, resulting in animal asphyxiation,” Duppstadt asserts. “A concentration of a mere 0.1% or greater of dry tissue is considered dangerous and can kill livestock.”

Grazing: If a killing frost occurs, do not graze or greenchop sorghum species for seven to 10 days. Duppstadt says since cyanide is a gas, it will dissipate slowly over time. Prussic acid levels are highest in plant leaves, and levels will not decline until plant tissues die.

A nonkilling frost can still make forages toxic. Avoid grazing regrowth from a frosted field for at least two weeks, or until plants are 2 feet in height. Even after a pasture meets these criteria, Duppstadt advises farmers to take additional action before allowing cattle to graze.

Chopping: Harvesting sorghum species for silage must also be delayed. Wait five to seven days after a killing frost before chopping the forage, and then store it for a minimum of eight weeks. During the fermentation process, cyanide gas will escape. Nonetheless, it is still necessary to test prussic acid levels before feeding.

Baling: Farmers can mow forage any time after a frost if it will be left to wilt. Duppstadt says prussic acid levels can drop 75% when hay is left to dry in a field, reducing the risk of poisoning significantly. Of course, drying forage late in the season to bale is often a difficult process.

Duppstadt reminds farmers that prussic acid can cause problems throughout the growing season, not just when it freezes. High fertilization rates and drought-like conditions encourage this toxin to accumulate in sorghum species as well. If prussic acid poisoning occurs at any time, contact a veterinarian for immediate treatment.

Graze drought-stressed cornstalks with caution Next

Capture all the energy your forage can offer Previous