Many of us in the North have already experienced consecutive November days of over 70°F. That really shouldn't happen. Though we can sarcastically point to El Niño, the National Oceanic and Atmospheric Administration (NOAA) tells us in last week's status update that this current version really won't have its greatest impact on the U.S. until December through February. Still, El Niño has already had some significant effects on weather in other countries such as Africa.

El Niños are often the cause for more Pacific hurricanes and fewer Atlantic events. To date, there have been 21 Category 4 and 5 storms in the North Pacific. This shatters the old record of 17, set in 1997. Based on August through October sea surface temperatures, the 2015 El Niño version ranks second only behind 1997.

Rank of the strongest El Niños since 1950 Though El Niño hasn't kicked into full gear yet from a weather modification standpoint, most experts continue to forecast below-average temperatures and above-median precipitation across the southern U.S. and above-average temperatures and below-median precipitation over the North. The Climate Prediction Center's most recent outlook for December through February is shown below (an update will be available November 19). 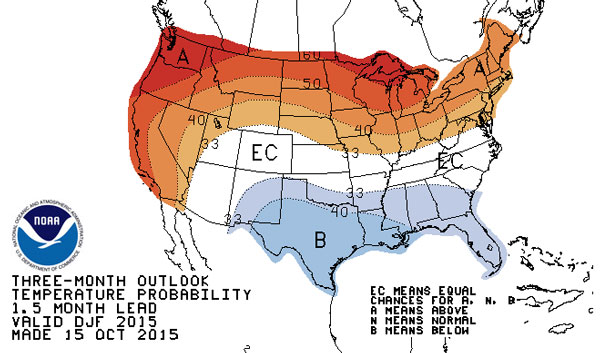 Though weather prediction is not an exact science, it is the strength of this particular El Niño that has everybody giddy. Still, keep in mind that we're only dealing with probabilities, not certainties. If the predictions come to fruition in a big way, there will be both winners and losers on the forage front. Those who need rain in the West will likely get it, though not enough to erase a four-year drought. In the North, a warm, dry winter seems inviting, but the ramifications next growing season may not be as welcome.