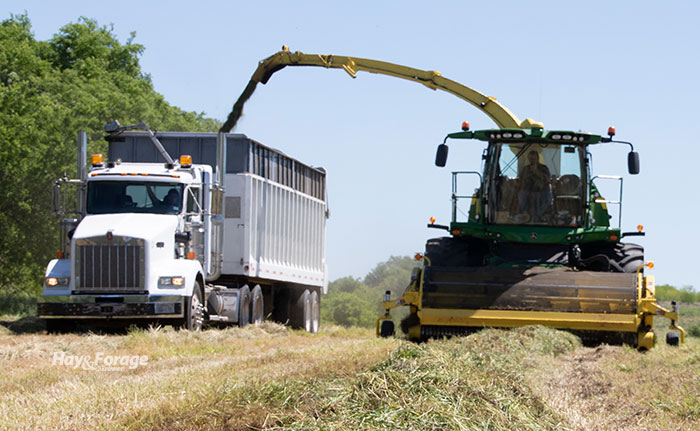 While this time of year is typically associated with planting season, it also marks harvest season for winter annual cereal forages. Scheduling harvest around spring rainfall events can be difficult, though, and often results in a tradeoff between forage yield and quality.

Cereal species differ in time to maturity and in forage quality and yield response. To demonstrate this, researchers at The Ohio State University conducted a study to compare yields and nutrient levels of four types of winter annuals harvested at two different maturity stages. The results were reported by Jason Hartschuh, an extension educator, and Mark Sulc, an extension forage specialist, in a recent issue of the C.O.R.N. Newsletter.

Cereal rye, triticale, barley, and wheat were planted at two Ohio research stations. At both locations, the cereals were harvested at either the Feekes 10 (boot) maturity stage or at Feekes 10.5 (flowering).

The winter annuals had different growth and maturation rates, which impacted yield and forage quality (Figure 1). For example, at the boot stage, cereal rye and triticale had similar average yields of about 1.75 tons per acre. At flowering, the average yield of cereal rye improved by about half a ton per acre, while average triticale yields reached approximately 2.75 tons per acre.

Average tonnages for barley and wheat improved by about half a ton per acre from boot stage to flowering as well, but these crops had lower yields overall compared to cereal rye and triticale. Hartschuh and Sulc note that the lowest-yielding locations experienced excessive precipitation and that there were large yield ranges between locations and years.

Although waiting to harvest until flowering stage provided additional dry matter for all species, this can come at the cost of forage quality. The researchers found that crude protein declined by approximately 2% in each species of winter annual between Feekes 10 and Feekes 10.5. There was no significant difference in crude protein levels among plant species (Figure 2).

At the Feekes 10 boot stage, wheat had the greatest levels of total digestible nutrients (TDN), followed by triticale, cereal rye, and then barley (Figure 2). At Feekes 10.5, TDN had dropped in every forage species. Conversely, neutral detergent fiber (NDF) started to climb. 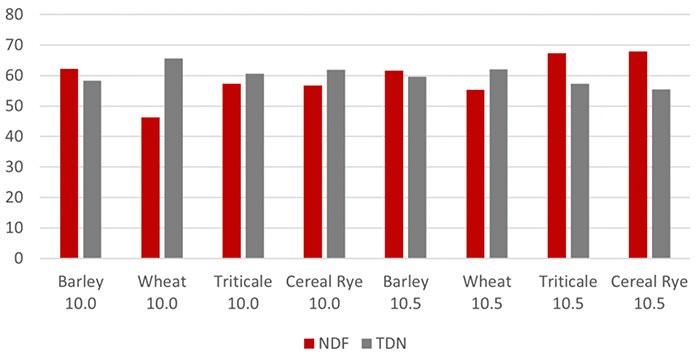 Cereal rye and triticale had the largest spikes in NDF between the boot and flowering stages. Throughout the study, wheat maintained the highest TDN and lowest NDF, whereas barley ranked lowest in TDN and highest in NDF. However, barley showed the smallest amount of quality decline.

Goals for forage yield and quality will vary depending on the class of livestock and the stage of production animals are in. With that said, even if high-quality forage isn’t the top priority, plan to harvest winter annuals sooner rather than later. This will allow greater flexibility in case wet weather sets in.

A good grass with a reputation problem Next