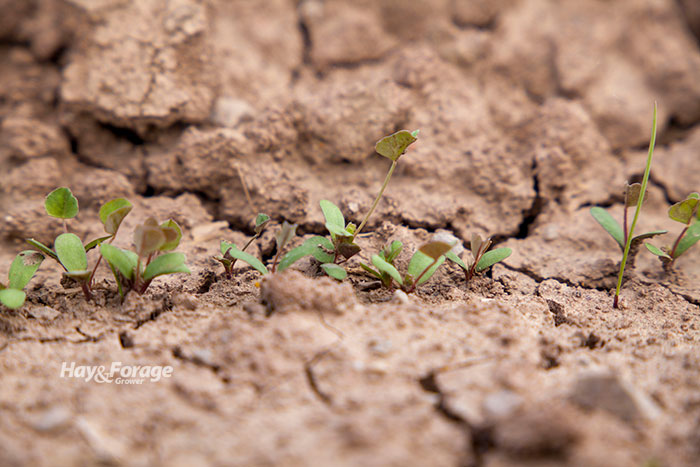 There are many reasons why less than 20% of the alfalfa seeds planted ultimately develop into productive plants, but cold temperatures during early development don’t appear to be a major one.

Sheaffer, a professor, and Goplen, an extension educator, found that alfalfa seeds were able to germinate near the freezing point of water (31.3°F to 32.2°F). The alfalfa varieties used differed in their fall dormancy rating. Of course, the researchers don’t suggest taking the drill to the field when it’s this cold, as they report that the optimum minimum temperature for alfalfa germination is 60°F.

“Scientists in the early 1900s reported that alfalfa seed germinated when surrounded with ice,” the authors note in a Minnesota Crop News article. “The ability to germinate at very low temperatures may be derived from alfalfa’s origin in the Fertile Crescent (of the Middle East), where early establishment when moisture is available may have a competitive advantage.”

Seedlings are tough, too

Beyond germination, the researchers also evaluated seedling survival at below freezing temperatures. They found that seedlings have excellent cold tolerance down to 24°F when germinated and hardened during early spring temperatures and daylengths (see graph below).

“Alfalfa at the hypocotyl arch, cotyledon, and unifoliolate stages had similar responses to freezing temperatures,” the Sheaffer and Goplen report. “The response to freezing was similar for three alfalfa varieties with fall dormancy ratings of 3, 4, and 5 with high levels of disease resistance.” 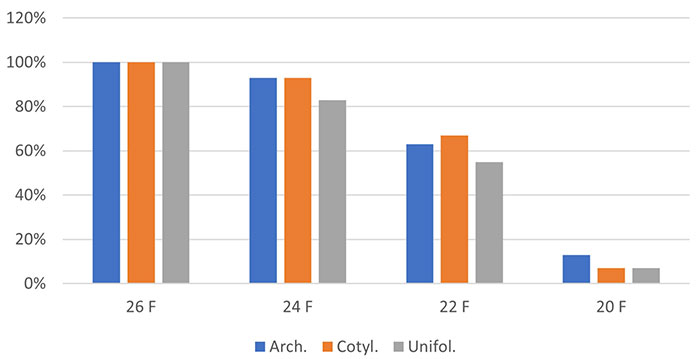 Hypocotyl arch, cotyledon, and unifoliolate leaf development stages were reached at seven, 10, and 14 days, respectively, at growth temperatures of 60°F during the day and 40°F at night.

Sheaffer and Goplen point out that the likelihood of reaching a temperature of 24°F or below during mid-May in Minnesota is “far less” than 10%. Even so, they still suggest following these seeding recommendations:

• Seed as early as possible while avoiding the likelihood of air temperatures of 24°F or below. Early seeding allows seedlings to take advantage of spring moisture conditions, compete better with weeds, and provides a longer growing season with the possibility of three cuts in the seeding year.

• Use seed treated with Apron XL (mefenoxam). With extended periods of germination under cool conditions, alfalfa seeds and seedlings are vulnerable for infection by Pythium and other pathogens. Pythium and other seedling diseases can cause “seed rot” or “damping off,” which can greatly affect stand establishment.