Two ways to pay for a hay barn 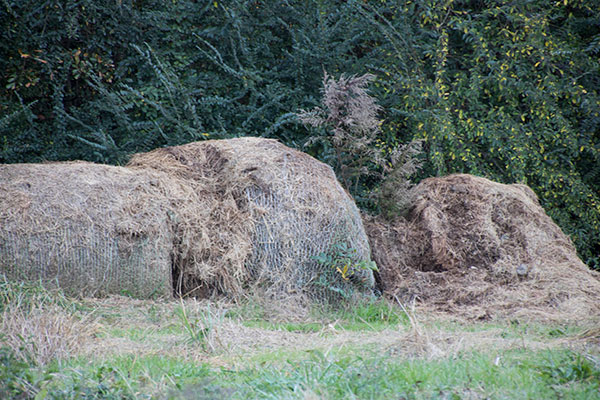 “Sometimes the method with the least expense ends up costing you the most,” says Brian Beer, an extension area livestock specialist for Clemson University.

Beer proves his point in a recent Southeast Cattle Advisor by comparing three different methods of hay storage: uncovered outside, stacked and tarped, and in a barn.

To make an economic comparison, the livestock specialist uses an example for a 50-cow herd being fed for 150 days. He assumes a total intake of 133 tons of bermudagrass hay, or 266 bales, based on a consumption rate of 2.5 percent of body weight and 1,000-pound bales.

“Every storage method will have some hay loss,” notes Beer, “but the difference between storing bales outside and uncovered is considerably higher than when it’s tarped or in a barn.”

Based on previous hay storage research, Beer assigns a loss factor of 5 percent to barn storage, 10 percent to bales stacked outside and tarped, and a conservative estimate of 30 percent to bales left outside and uncovered. To assign a cost to these losses, he surmises that additional hay acres will be needed to cover the greater loss of the outside storage systems.

Using Clemson’s hay enterprise budgets, he assumes the total cost of producing an acre of bermudagrass hay is $512. At a 5-ton yield level, this equates to a value of $102 per ton, or $51 per 1,000-pound bale.

Based on these values, it would take two additional acres of hay production to make up for losses from the tarped system compared to barn storage and seven additional acres for the outside/uncovered system under an assumed 30 percent loss scenario. The resulting added production costs are shown in Table 1.

Of course, there is also a cost that is associated with each storage method. Beer figures the cost of a barn at $2,006 per year. This is based on a price of $7 per square foot for a 48- by 48-foot structure, a 5.5 percent interest charge, and an annual repair and maintenance cost of 2 percent with a 20-year life.

For the tarp system, the annual cost is figured to be $390 per year. This assumes that four tarps are needed with an initial investment of $1,280 and a four-year lifespan with no annual repair and maintenance charge. Beer assigns no annual cost to the outside/uncovered system.

Next, the livestock specialist calculates the total annual cost associated with the storage methods by adding the annual production and storage costs for each system. These calculations are presented in Table 2.

The lowest total annual cost comes with the tarped system; although Beer points out that some farmers no doubt would feel it’s not worth $592 per year to wrestle with tarps as hay is being harvested and fed-out. The next lowest cost system is to build a hay barn.

Hay that is left outside and uncovered costs the most on an annual basis — $1,579 more than building a barn. As such, a new barn could be paid for in about 11 years. Keep in mind, however, that is with a modestly figured 30 percent dry matter loss. Bump that loss level to 40 percent, which is not uncommon for twine-wrapped bales sitting on the ground, and the barn gets paid for in 5-1/2 years.

Any way that you do the math, losses mount for hay that is stored outside without being covered. This leads Beer to conclude, “There is some truth in the old saying that ‘Farmers who store hay outside will pay for a barn, whether they build it or not.’”

Plan ahead before siting a hay barn Next