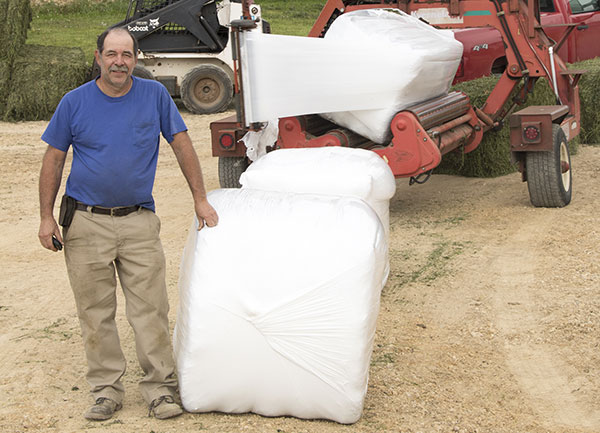 “Mike, you need to come down here. I’d like to talk to you,” related the voice over my office phone in late April.

I would soon learn that voice belonged to Willie Foster, a man who has a passion for wrapping large square bales and, for that matter, a general interest in all things wrapped forage.

How much of a passion does Foster have? His meticulous records show the total number of bales he’s wrapped as a custom operator is over 300,000 . . . and counting.

Foster is no Johnny-come-lately. He bought his first square bale wrapper in 1993 — a Kverneland model. “Not too many farmers were wrapping square bales back in those days,” Foster said. “It was somewhat of a leap of faith, though there was definitely a demand.” These days, Foster wraps around 10,000 bales per year for farmers throughout southwest Wisconsin.

Foster’s modest shop and machine shed is where he’s designed and built any number of bale handling tools for large square bales that he and some of his clients continue to use. Foster farms no land himself. From the shop have come a large square bale slicer and his current project, a front-end bale squeezer designed for skid steers to gently handle wrapped square bales.

As for his first 1993 square bale wrapper, “I’ve done some modifications to it through the years,” Foster said. Although originally designed to run off of a tractor PTO and hydraulic system, the wrapper now has its own engine and hydraulics. He’s done the same with another machine he bought several years after the first one. Both are pulled and operated from a pickup truck seat with the help of an electronic control box. Though Foster has a round bale wrapper, it has always been a small part of his business.

The fact that Foster serves as a custom bale wrapper isn’t the only unique aspect of his life. He obtained a Ph.D. in dairy management from Virginia Tech University in 1988. A transplanted New Englander, Foster taught at South Dakota State University for four years after getting his degree and then worked in private industry as a sales representative and nutritionist for several more years. He left because he saw a need for wrapped high-moisture bales and thought he could make a living at it — and he was right.

Although he hasn’t been a university employee for many years, Foster still has a passion for research and a drive to find out what works, what doesn’t work, and why. Being only a stone’s throw away from the University of Wisconsin Lancaster Research Station, Foster has involved himself in a number of bale wrapping research and demonstration trials to determine the optimum bale moisture for wrapping and the minimum thickness of plastic that is needed. This year he is investigating oxygen barrier films. He passes his knowledge on to his clients.

“Back in 1994, I quickly realized that the rules for round bales did not apply to square bales. The denser package made them different,” Foster said. “We did a trial and determined that at least six, and sometimes eight layers of 1 mil (millimeter) plastic were needed. Specific conditions, including hay moisture, time of season, humidity, and perhaps time of day had an impact on the storability of wrapped bales and the amount of plastic needed."

Of special significance was the discovery that you could successfully wrap low-moisture bales. “Farmers like the lower moisture bales because they were lighter and easier to handle,” the amiable Foster explained. Along with Dan Undersander, Wisconsin’s extension forage specialist, a trial was designed to look at various hay moisture levels and wrapping thicknesses. “What we found is that you can effectively wrap a square bale at any moisture, but the lower-moistures require more plastic. It becomes a matter of fermentation versus oxygen exclusion,” Foster said.

Foster prefers to wrap bales within 24 hours of baling, though sooner is better. “When we did a trial looking at wrapping time after baling, in most cases 24 hours was acceptable. I like to wrap in the morning and in the evening or night, if possible. Waiting to wrap causes bales to heat rapidly, but after wrapping they cool down quickly. In the trials we did, waiting several days to wrap did not significantly change forage test results, but it did result in higher dry matter loss and mold development,” he said. When the weather is hot and humid, he likes to wrap as soon after baling as possible.

Like all custom hay harvesters, Foster related that the occupation is by nature a high-stress endeavor. “Everybody is harvesting and wants your services at the same time. It’s all weather dependent,” he said. “I learned the hard way and worked myself into a heart attack in 2002. Since then, I’m more careful not to overcommit myself and I’ve had good help, especially my wife and my sons during their high school and college years. Overall, I’ve really enjoyed wrapping bales and it’s provided a good living for me and my family.” Willie Foster checks the hay moisture at the beginning of another day when he will fire up his wrapping machine. He has wrapped over 300,000 square bales since he started his custom business in 1994.

He no longer wraps hay as a last resort Next