The risky business of fall cuttings 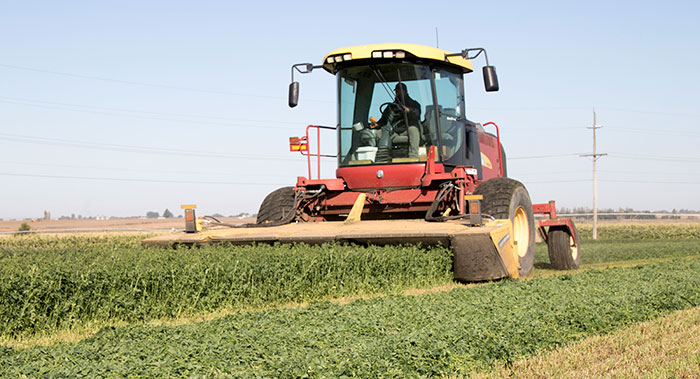 Production agriculture has always been and will always be a gamble. Growing forages is no different. Ensuring productive stands next growing season starts this season, as the final cutting date affects root reserves and, consequently, future growth.

“All perennial forage plants, including alfalfa, use the fall period to build up carbohydrate reserves that keep the plant alive over the winter, provide sugars to keep the plant from freezing, and provide the energy needed to start spring growth,” says Rory Lewandowski, extension educator with The Ohio State University, in a recent C.O.R.N. newsletter.

Photosynthesis is the process by which plants establish these carbohydrate reserves. Maintaining healthy stands and leaves through late fall enables plants greater access to sunlight and the nutrients needed to thrive the following spring. Late-fall cuttings may not allow the plant sufficient time to regrow leaves and replenish the energy expended to grow them before frost ends the growing season, Lewandowski continues.

“The worst time to take a last cutting is in the late September to the later October period,” Lewandowski notes, adding that the Ohio Agronomy Guide advises final cuttings be made no later than September 7 in northern Ohio and September 15 in southern Ohio.

Additionally, growers should consider their reasons for taking a final cutting. Lewandowski urges producers to forego the added time and expenses of nonessential cuttings and let the stand rest. A later cutting’s profit must justify the cost of equipment and labor if it is going to be worth gambling with the productivity of next season’s yield. Risk management factors to consider when making this decision include overall stand health, variety, disease resistance, summer insect stress, age of stand, cutting frequency/schedule, fertility, soil drainage, and winter weather, Lewandowski notes.

Elaborating on these factors, Lewandowski points out that stressed, weakened stands are less tolerant of fall cuttings. Also, refrain from further damaging fields with ruts and soil compaction from wet conditions as plant crowns are most likely to be damaged. Lewandowski adds that newer, more improved genetic varieties of alfalfa may be selected to withstand some of these weaknesses.

“Alfalfa varieties with high disease resistance and good levels of winterhardiness will be more tolerant of a fall cutting,” Lewandowski explains. “Adequate fertility, especially soil potassium levels, and a soil pH near 6.8 will improve plant health and increase tolerance to fall cutting. Stands under 3 years of age are more tolerant of fall cuttings than older stands where root and crown diseases are setting in.”

Even as winter approaches, soil drainage should still be considered when discussing stand health. According to Lewandowski, alfalfa on well-drained soil better tolerates late cuttings as the removal of top growth on poorly drained soils raises the risk of damage from frost heaving in the spring. In addition, this top growth is needed to ensure adequate snow cover, which protects stands through insulation.

Finally, experienced and inexperienced producers alike have had success with fall cuttings as late as mid-October. For those willing to take that gamble, Lewandowski recommends leaving some uncut comparison strips in the field to observe the vigor of new growth at spring green up.

Some weeds have value Next