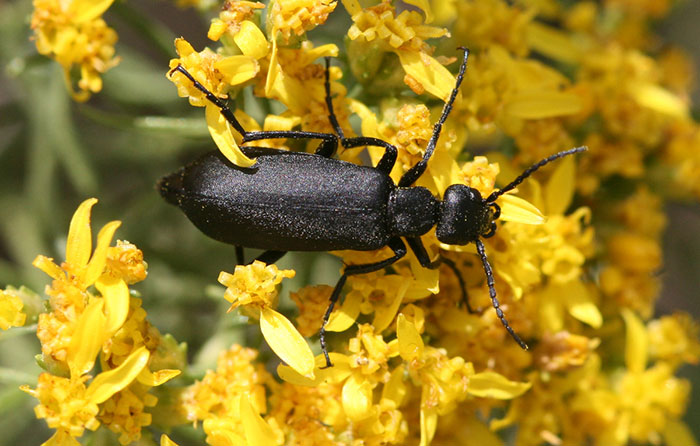 “The larvae of these beetles are beneficial because they feed on grasshopper eggs,” he informs in SDSU’s Pest & Crop Newsletter. “However, the adults feed on the leaves and blossoms of plants, including alfalfa, and they contain a toxic chemical called cantharidin.”

Last year on one Wisconsin ranch, at least 16 horses died from blister beetle-infested hay, and dozens of others at the same facility expressed illness related to the toxin.

The blister beetle’s anatomy has some unique features. Its thorax is narrower than both its head and abdomen, and when relaxed, the abdomen extends past the beetles hardened forewings. Although, these are not the only unique characteristics of the insect.

The blister beetle’s blood contains cantharidin, which is released through reactive bleeding. When in contact with skin, cantharidin will produce blisters, hence the name blister beetles. However, “If the beetle and toxins are ingested by animals, it can lead to sickness or even death,” Wagner warns.

The entomologist advises farmers to scout hayfields to assess blister beetle populations and penetration. The worst infestations usually occur along the edges of fields and in areas that had large grasshopper populations during the previous year.

He adds, “Second and later cuttings are at higher risk of infestation because blister beetles are more abundant by early to mid-summer.”

Insecticide applications are not recommended. While insecticides will kill blister beetles and prevent damage to hay crops, they will not remove the insects or their toxins from the hay.

Cutting alfalfa before peak bloom and allowing cut hay to fully dry before raking will mitigate the number of beetles that are baled.

“Ensure that blister beetles aren’t present or notify the buyer of any infested bales,” Wagner urges. “Horses have a particularly high sensitivity to cantharidin, so it is important that they don’t consume infested hay.”