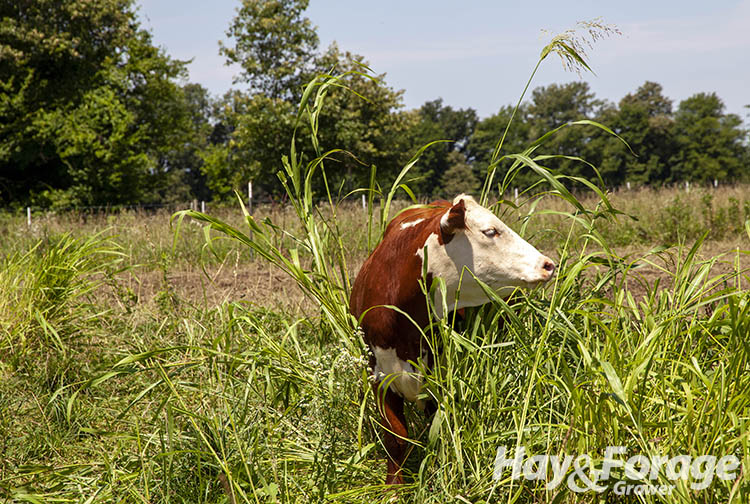 I was fresh of out college in the late 1970s and found myself working on a large dairy and grain crop operation in southern Illinois. My previous days on earth were spent in the North where quackgrass was the only dominant pest grass that spread like wildfire from rhizomes, or underground stems.

It wasn’t too many days into my first job that I learned about johnsongrass, which was just starting to take hold in the region. The instructions given to me were crystal clear: “If you see a patch of johnsongrass, grab the Roundup sprayer.” To motivate such an action, I was offered horror stories of those who chose to ignore the warm-season, rhizomatous grass.

I find myself walking around a Kentucky beef producer’s farm. Patches of johnsongrass dotted a pasture that was otherwise filled with cool-season grasses and legumes. A couple of Herefords were chomping on the noticeably taller johnsongrass plants. The beef producer looked at me and said, “We encourage johnsongrass in our fescue . . . it’s a gift from God that helps dilute the fescue. The cows love it.”

During the past 40 years, johnsongrass has made its way onto many states’ noxious weeds list. It is extremely competitive and can quickly overtake a field or pasture if left to its own devices.

Glyphosate-resistant johnsongrass has been verified in several Southern states, primarily in row-crop systems. These days, many livestock producers try to keep it to a manageable level through intensive rotational grazing and, like that Kentucky beef producer, may even value it as a forage resource. Eliminating the species is difficult, if not impossible. 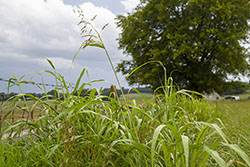 Johnsongrass has some desirable forage characteristics. In grazing and palatability studies at the Noble Research Institute in Ardmore, Okla., johnsongrass was shown to be a preferred species by grazing yearling steers.

The forage quality of vegetative johnsongrass ranges from 10% to 14% crude protein and 55% to 60% total digestible nutrients. These levels compete favorably with other warm-season species such as bermudagrass.

If johnsongrass is to be used as a forage resource in times of short feed supplies such as during drought conditions, it ideally needs to be grazed between 6 and 18 inches. Once johnsongrass develops a seedhead, its palatability and forage quality drops significantly and cattle will avoid it.

Pastures that are continuously grazed often won’t have any johnsongrass because cattle tend to preferably overgraze the species. It is a species that doesn’t tolerate frequent and low grazing because its growing point is 4 to 8 inches above the soil surface. Repeated defoliation will eventually weaken and kill plants.

Perhaps the biggest problem with johnsongrass is keeping it under control. It can spread by either seed or rhizomes. New shoots from rhizomes begin appearing three to six weeks after plant emergence in the spring. Johnsongrass is a prolific seed producer, and it takes some thoughtful grazing management to keep additional seeds from being added to the soil.

Aside from its competitive nature, johnsongrass has some other undesirable characteristics that deserve attention. It is high on the list of prussic acid (hydrogen cyanide) producers under stressful conditions. Dry, cloudy conditions; herbicide exposure; drought; and frost can all induce higher prussic acid levels in johnsongrass plant tissues.

Given a choice, most livestock producers would prefer not to deal with johnsongrass because of its competitive nature. Unfortunately, eradication has become nearly impossible and, for this reason, many producers just choose to adopt it like a stray dog that won’t leave the farm. Grazing strategies, pasture renovation, herbicides, and mechanical clipping can all be effective tools to keep plant populations in check.

An enjoyable 40 years of grass breeding Next