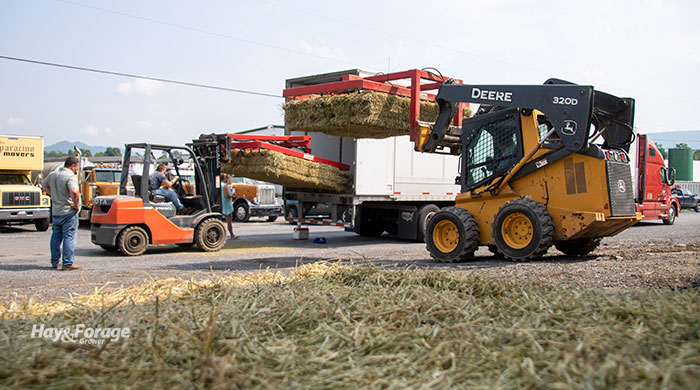 With mowers and balers safely tucked away in machine sheds, the focus now shifts to marketing and selling the summer's bounty.

Hay marketing is a business that is built on trust and honesty from people on both ends of the transaction. Unlike selling #2 corn, there are many more variables to consider in the transaction process, and product descriptions can vary widely.

Forage testing is a helpful and sometimes mandatory tool when selling hay, but many buyers (especially horse owners) neither want nor have the knowledge to decipher the plethora of forage quality metrics. This limits analysis to sensory evaluation, which usually entails sight, touch, and smell.

Successful hay marketers learn quickly that being honest with their clients is the only way to keep a loyal customer base. Hay buyers don’t react favorably when they receive a load of hay that wasn’t well represented during a phone call or in an advertisement. The stakes are even higher as hay prices remain at record levels for this time of the year. High prices generally translate to low tolerance for a misrepresented load of hay.

Many successful sellers will guarantee their product. If the customer isn’t happy, amends are made by either substituting different hay or with a price adjustment, if it’s appropriate. Another approach, if possible, is to offer some “test” bales from the same hay lot before a final larger delivery is made.

Although honesty on the hay seller’s side is paramount, the same is true on the buyer’s end.

Getting “hung” with a bad check or no check for a hay sale is something that many haymakers have experienced at least once through the years. Whenever the topic is broached on an internet forum or social media site, the replies of personal experiences abound. Unfortunately, a bad check scenario is more common when hay prices are high.

Whenever hay is delivered with only a promise of payment, the producer is put in the unenviable position of an unsecured creditor. This is always a position of risk.

The best-case scenario after receiving a bad check is that an honest mistake was made, and the problem is quickly resolved. Unfortunately, this doesn’t always happen. Taking legal action may be an option, but it’s one that most producers want to avoid as costs can mount to more than the value of the claim.

The best offense against bad checks is a good defense. This can encompass a variety of possible strategies.

Some hay producers who have experienced nonpayment on several occasions have gone to the extreme of only dealing with buyers whom they know and trust. This, however, is not always possible.

Another method to ensure payment is to deal only in cash or a cashier’s check. Hay is not loaded (or unloaded) until payment is received. In cases of payment by personal check, this means the check must clear the bank before the hay is loaded at the farm or delivered. Of course, this latter approach puts a strong burden on the seller to represent the product honestly.

Some hay sellers have turned to technology and utilize a credit card reader that attaches to their tablet or cellphone. This puts the onus of collection on the credit card company but comes with a user fee that may or may not be passed on to the hay buyer.

Hay sellers also need to be on the lookout for scammers. Unfortunately, this has become easier and more common in the industry. Many scams originate from outside of the U.S., though not exclusively.

Here are some of the indicators of a potential hay scam:

• Initial contact is made by text message or email, and the buyer is hesitant to speak by phone.

• The buyer offers payment by cashier’s check or money order.

• The buyer insists on paying more than you’re asking but requests that you send the difference back to them or pay the trucker.

• The buyer doesn’t inquire about the type or quality of the hay.

• The buyer has an unusual name or email address.

Often, scammers acquire a hay seller’s contact information from an advertisement or internet hay sellers’ list. When a hay scam is suspected, the best thing to do is contact your state’s Department of Agriculture and/or the local sheriff’s office.

To catch a thief

Already this year, we’ve heard about multiple reports of hay thefts, similar to what was experienced during the 2012 drought. This is occurring to hay left in fields and, in some cases, the thieves are going right into the barn during the dark of night.

Unfortunately, it’s difficult to track down hay thieves unless extreme measures are taken.

High hay prices bring both improved opportunities and risks. Honesty and trust from both the buyer and seller are needed. Although sensory evaluation is still widespread in the industry, hay testing can still be a valuable tool to help take some of the subjective evaluation out of a hay transaction.

He’s a bale-grazing disciple Next