Alfalfa harvest damage: Is it a big wheel? 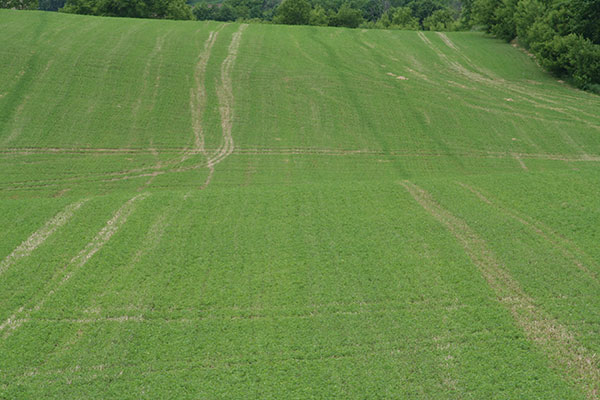 Anyone who has grown and harvested alfalfa has seen the effects harvest machinery wheel traffic can have on a stand. Visually, it’s most noticeable a week to 10 days after harvest in the form of delayed plant regrowth. Of course, wheel traffic during harvest from cutting, raking/merging, and baling or chopping can’t be avoided, but knowing how the damage is caused is helpful in minimizing yield loss.

In the review, it’s clear that most of the science on the topic points to plant damage rather than compaction. “Compaction due to the multiple trips is a factor, but breaking (plant) shoots that may have started to regrow after cutting has a depleting effect on stored root carbohydrates,” notes Clevenger.

Indeed, research from both California and Wisconsin point to plant damage, not compaction, as the primary contributor to yield loss from harvest machines. This damage comes in various forms. It may be direct damage to the plant crown, allowing entry for disease pathogens and impacting both the short and long-term productivity of the plant.

Likely more common is breakage of new shoots. This forces the plant to “reboot” and use stored root carbohydrates to initiate new shoots from the crown. Clevenger points out that research from Wisconsin demonstrated that timing of wheel traffic damage plays an important role in how much damage actually occurs. The more delay after cutting, the greater the losses.

Reported estimates are 4 to 6 percent loss per each day that passes after cutting. For example, if wheel traffic damage occurs five days after cutting, yield loss at the next harvest can be from 20 to 30 percent for plants under the tire track. “Traffic during cutting does not have the same harmful effect of later traffic during baling or bale removal,” notes Clevenger.

Though harvest machine damage to alfalfa can never be totally eliminated, there are steps that can be taken to minimize. At the top of the list is to harvest the crop as soon as possible after cutting and to minimize or control wheel traffic as much as possible. There are also alfalfa varieties more tolerant of wheel traffic than others, but this shouldn’t be the only selection criteria when choosing an alfalfa variety.

Sprigging season has arrived Next