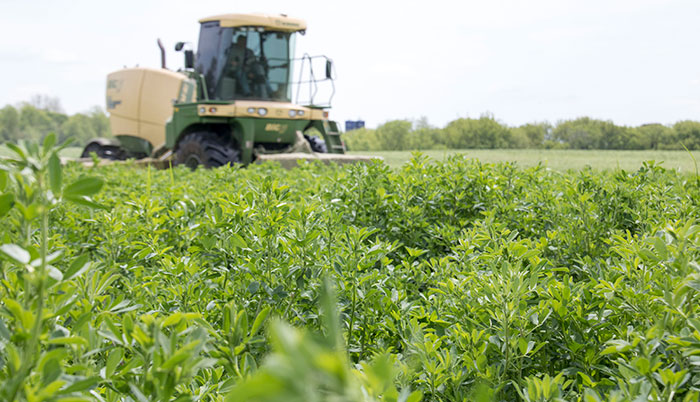 The push to improve alfalfa forage quality through lowering lignin content and, more importantly, improving fiber digestibility is in full-throttle mode. You’d have to be living under a rock to think otherwise.

With marketing campaigns now in full swing and many company offerings to choose from, it can be difficult to sort out fact from fiction.

To be sure, most legitimate marketers have their own developmental research to share with prospective buyers, and this research is often both valid and helpful; however, it’s also research that comes from a source that has “skin in the game.” Most companies, if they want to stay in business, aren’t going to release research results that make their product look inferior.

To overcome the problem of perceived bias, many companies will sanction third-party, independent sources such as universities to verify company results. It’s also common that public researchers may take it upon themselves with outside grant money to investigate certain products or management strategies centered on those products.

That’s where we are with reduced-lignin alfalfa, and the initial onslaught of research results is now starting to be made available and in some cases published in peer-reviewed scientific journals.

Seeding-year data has value, but it doesn’t offer the more relevant information that comes with subsequent production years. Alfalfa is not a “one and done” deal. Data from consecutive full production years is ultimately what will validate or raise concerns about previously released company research. In the past, we’ve seen it go both ways.

Research from multiple university sources coupled with grower experiences will ultimately determine a product’s future fate in the marketplace.

University research results pertaining to reduced-lignin alfalfa have recently become a common topic at forage field days and conferences. That will continue through the next several years as an additional production year and more environments are added to the body of knowledge. One such university trial that was recently submitted for journal publication comes from the University of Minnesota.

The Minnesota study compared a HarvXtra variety, 54HVX41, with three other fall dormancy 4 conventional varieties at three locations/environments. During the first production year, first cutting was taken in late May for all of the varieties. A subsequent cutting interval of 30, 35, 40, or 45 days was then compared. A late-fall cutting was also taken for all cutting regimes in early October.

Some of the more significant results from this trial were as follows:

•Averaged across cutting schedules, total-season yield differences between the four varieties were minimal. The only statistically significant difference occurred at one of the locations where the HarvXtra variety yielded 0.4 ton per acre less than the conventional varieties.

•Neutral detergent fiber digestibility (NDFD) was 11 to 18 percent higher for the HarvXtra variety at two of the locations. At the third location, alfalfa maturity was delayed compared to the others and no significant difference in NDFD was detected.

•The HarvXtra variety exhibited an advantage in relative forage quality (RFQ) throughout its growth cycle when regressed across accumulated growing degree days (GDD) from 772 to 1,248.

•Under the cutting regimes imposed in this experiment, a 35-day cutting interval resulted in a 21 percent gain in yield and a 3 percent reduction in RFQ compared to conventional varieties harvested on a 30-day harvest interval. The researchers suggested that this would allow for greater harvest timing flexibility while still maintaining higher forage nutritive value.

The Minnesota study is just one example of many to come, not just with HarvXtra-traited varieties, but also with varieties bred conventionally for reduced lignin content and/or high fiber digestibility. Look for the knowledge base to rise exponentially over the next few years as a multitude of cutting strategies and varieties continue to be evaluated by public sector researchers. As we move forward, here are some of the questions I would like to see addressed:

1. How much variation in performance (yield and quality) exists among marketed HarvXtra-traited alfalfa varieties?

2. With more and more conventional varieties being touted as having a lower lignin content or higher fiber digestibility, where do these rank both among each other and with HarvXtra-traited varieties?

3. How will cows respond in a controlled feeding study? How should rations be changed or not changed?

4. How will extended cutting intervals impact stand life and persistence?

5. Where do these varieties fit with brown midrib corn?