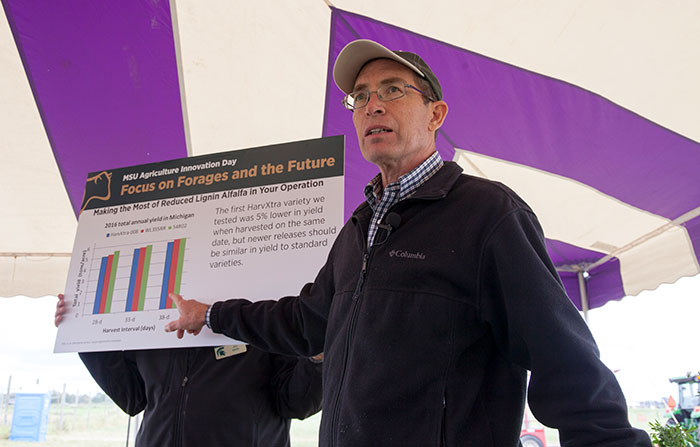 “If it’s marketed as reduced lignin, that means there must be something good about less lignin . . . right?” asked Mark Sulc, as he addressed attendees at Michigan State’s Ag Innovation Day event last month at the Lake City Research Center in north central Michigan.

Sulc, The Ohio State University’s extension forage specialist, then proceeded to explain the forage quality virtues of a plant with reduced lignin and how research is largely confirming the developmental promises.

“Lignin, along with cellulose, hemicellulose, and pectin comprise the main components of a plant’s cell wall,” Sulc said. “What distinguishes lignin from those other components is that it severely limits forage digestibility.”

As alfalfa grows and matures, it gains yield but also accumulates more lignin.

“We’re also working with that compromise between yield and quality,” Sulc explained. “In this part of the country, about 28 to 30 days is when we generally get good enough yields to make alfalfa economical to grow and obtain adequate quality for dairy cows or growing beef animals,” he added.

If lignin concentration is reduced at any point in time, it follows that forage quality, specifically fiber digestibility, will be improved. HarvXtra is a genetically modified trait that reduces the activity for one of the enzymes involved in the production of plant lignin.

“Varieties with the HarvXtra trait have, on average, about 15 percent less lignin compared to conventional alfalfa varieties,” Sulc said.

Sulc was involved in one of the first multi-state university studies with HarvXtra that was established in 2015 and generated first production-year results in 2016. He presented data averaged across four states (Ohio, Michigan, Wisconsin, and Kansas) using a HarvXtra variety compared to WL355RR (a Roundup Ready, high-quality variety) and 54R02 (a Roundup Ready, high-yielding variety).

“The HarvXtra variety we were given yielded about 5 percent less than the other two varieties when cut on the same date,” Sulc said. “That component is likely to change as new varieties are released, so we need to test more lines. It’s been my experience with other traits that as new lines are developed, performance improves over the course of the second and third generations,” he added.

As for forage quality, Sulc said that neutral detergent fiber digestibility (NDFD) was significantly better for HarvXtra than for either the high-quality or high-yielding varieties. That advantage held regardless of how often stands were cut.

“What we found is that cutting could be delayed at least five days and more often seven days with the HarvXtra variety while still getting equal forage quality,” Sulc said. “Michigan State’s forage specialist, Kim Cassida, tells me that she thinks that delay can be extended to 10 or 14 days in northern Michigan.”

“Cutting at your normal time results in about a 5 percentage unit boost in NDFD,” Sulc surmised based on the research results. “That should translate to about 2.5 pounds more milk per head per day based on Mike Allen’s research at Michigan State.

“This level of production response is only realized if alfalfa is a significant forage component in the diet. But even if you don’t feed a large amount of alfalfa, there’s still the flexibility factor. If you have a rain delay, machine breakdown, or the custom harvester doesn’t show up, cutting later still gives you the same quality. What’s that worth? I don’t know that we have a dollar figure to put on that,” he added.

Sulc pointed out that there is no animal feeding data at this point and that producers are going to be the first ones to evaluate actual responses.

There are also some advantages to taking the delayed cutting approach. “We know from past research that the more you cut, the shorter the stand life,” Sulc said. He showed some plants from the Michigan State plots in East Lansing that had been dug from the 28-, 33-, and 35-day cutting schedule plots. Those from the 28-day plots were visibly smaller in root structure than those from the more conservative cutting schedules.

“When we cut alfalfa aggressively for quality, the recovery time is shortened and plants only have about two weeks to restore carbohydrate root reserves after reaching their lowest point in the regrowth cycle,” Sulc said. “That extra five to seven days can make a big difference.”

Sulc explained that alfalfa growers might want to consider a hybrid approach by cutting the initial spring growth at the regular time and then delay the subsequent cuttings. “The spring cutting window is generally narrow, so you don’t want to miss it,” he said. “It’s also the cutting where the rate of quality decline is the greatest.”

Finally, Sulc mentioned that Alforex’s Hi-Gest alfalfas are also being marketed as low-lignin varieties. “These are conventionally developed alfalfas that were selected for lower lignin content,” he said. “They have about a 7 percent reduction in lignin. In Pennsylvania and California comparison studies, they trended slightly above the conventional high-quality lines like WL355RR for fiber digestibility. They also had very good yields,” he concluded.

Alfalfa-grass mixtures are complex Next