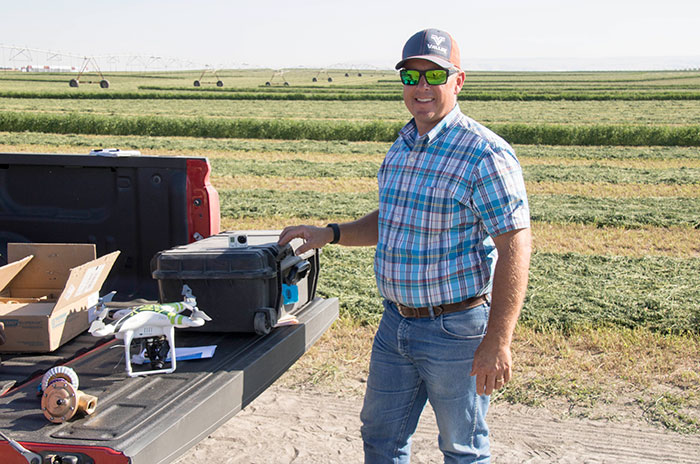 Drex Gauntt is not a farmer who fears technology. To the contrary — he embraces it as an income generator, a tool to more efficiently use water, a way to better manage his time, and for the benefit of the environment.

I first visited Gauntt’s southeast Washington farm during September 2016 when we discussed his forage program and his use of a drone to scout and monitor fields. He impressed me then as a person who was always thinking one step ahead. That opinion didn’t change as he recently spoke at the Western Alfalfa & Forage Symposium in Reno, Nev. 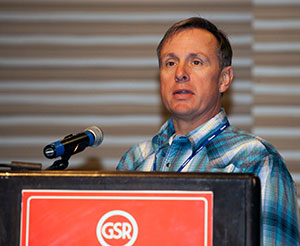 Drex Gauntt
“Remote controls and telemetry allow me to be the irrigation department on 2,000 acres,” Gauntt said. “With the ability to remotely monitor soil moisture, pumps, pivots, and auxiliary controls, I can single handedly manage the entire system and identify problems when they occur.”

From his smartphone, Gauntt is able to control pivot function, water flow rate, water sources, chemigation, and fertigation. Each pivot has its own GPS (global positioning system) unit that gives precision location. The third-generation farmer sets operational parameters and receives an alarm when the system is performing outside of his predetermined boundaries.

“Connectivity is a must,” Gauntt said. “This can be by the internet using a cellular satellite or other high-speed option. A standard two-way radio can be used with a base station. We’re also seeing Wi-Fi networks that report to a base station showing up on some farms,” he added.

High-efficiency sprinklers are also a key component of Gauntt’s irrigation system. The low-pressure sprinklers have a large throw radius, allow for multiple trajectories, and emit a large droplet size. To further mitigate wind drift and evaporation, he uses drop hoses that allow for a midlevel application height.

Gauntt has sprinklers with dual sets of nozzles. Depending on the crop, he will use either a low-flow or normal-flow nozzle. When germinating small seeds such as alfalfa or timothy, the low-flow nozzles are used. This saves water, pumping costs, and minimizes field runoff.

“Always having two sets of nozzles on each sprinkler allows me to change types quickly and without mistakes,” Gauntt said. “I can change nozzles by myself on a quarter-mile, 150-head pivot in about 20 minutes. It’s just a quick, easy deal.”

Gauntt is also using variable rate irrigation (VRI). “VRI allows for better use of water,” he said. “Dry areas can receive more water and wet areas less. Rather than be uniform in irrigation, I believe we need to be uniform in production. VRI allows us to do that.”

The Washington alfalfa grower uses both speed controlled and zone controlled VRI, depending on the pivot. Gauntt explained that zone-controlled VRI offers the advantage of better resolution, but it’s more costly. He further emphasized that not every field benefits from zone-control.

Gauntt has pivots where he has only put zone-control valves on the outer five spans rather than the full-pivot length. He explained that this allows him to cover two-thirds of the field with zone control for half of the price of having zone control on the entire pivot.

“Make sure that the professionally generated zone-control maps make sense with what you know about the field,” Gauntt explained. “Farmer input is important. VRI is not an instant fix and requires frequent evaluation. Crop types and plant maturity throughout the year are going to require different prescriptions,” he noted.

Even with this technology, Gauntt acknowledged that a pair of boots, a shovel, and a soil probe are still one of the best ways to monitor soil moisture. “It takes time to do it manually, but it’s important to verify what the technology is telling you,” he said.

“I feel technology makes me a better steward of soil and water,” Gauntt concluded. “It’s allowed me to use my time more efficiently and prioritize immediate needs. Most importantly, it’s made me more profitable.”

High-quality alfalfa pays, even with grass Next