High-quality alfalfa pays, even with grass 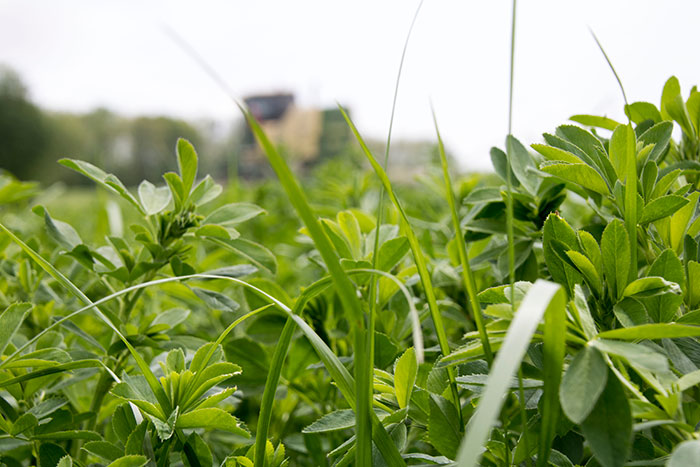 A plethora of research activity is completed or ongoing examining the virtues and economics of the HarvXtra alfalfa trait. For the most part, this trait has proven to perform as advertised.

Most of the work with this genetically engineered trait has been done with pure alfalfa stands in various combinations of cutting schedules and with comparative forage quality analysis.

But what about alfalfa-grass mixtures? Is there a benefit?

For those answers, we turn to Jerry Cherney, extension forage agronomist at Cornell University. In the Northeast, a large percentage of alfalfa fields are seeded with grass. This brings in a couple of new dynamics.

First, there is a dilution effect from the grass, which has a higher neutral detergent fiber digestibility (NDFD) than alfalfa. Also, there is not the opportunity to capitalize on the Roundup Ready trait, which comes as a part of the HarvXtra package.

Research conducted at Cornell during 2017 helps to bring light to some of the questions surrounding the HarvXtra-grass issue.

“While alfalfa can significantly impact grass crude protein content in mixtures, grass has little impact on any alfalfa quality traits in these mixtures,” says Cherney in Cornell’s What’s Cropping Up? Blog post. “This means we can compare alfalfa varieties in mixtures and expect similar results as if they were in pure stands.”

In the 2017 Cornell data, pure HarvXtra stands harvested five and one-half days later provided similar NDFD as conventional varieties on a normal cutting schedule. That delay tended to shrink as more grass was incorporated into the mixture.

“Our 2017 results showed on average a 5.3 percent increase in NDFD for HarvXtra over other alfalfa varieties,” Cherney says. “Replacing a conventional alfalfa variety with HarvXtra should result in a significant increase in mixture NDFD for a stand that is nearly 60 percent grass,” he adds.

However, it’s not just about the alfalfa.

Cherney suggests that replacing a lower quality grass with meadow fescue results in enhanced NDFD down to as low as 15 percent grass in the mixture. “This is because grass NDFD is much higher than alfalfa NDFD,” he explains.

“As low as 5 percent of any grass in a mixture with alfalfa will significantly increase mixture NDFD,” Cherney says. He considers a significant increase to be 1 percentage unit, enough to support an additional 1/2 pound of milk per cow per day, or perhaps even more for a high-producing cow.

The addition of HarvXtra and meadow fescue raised NDFD an average of 3.5 percentage units in the 2017 Cornell trials. This translates to $100,000 additional annual income for a 1,000-cow herd at a $17 per hundredweight milk price.

Cherney notes that the added seed cost of HarvXtra, even with the Roundup Ready trait, is relatively insignificant compared to the potential return of $100 per cow per year. Further, this forage-producing strategy is relatively farm-size neutral.