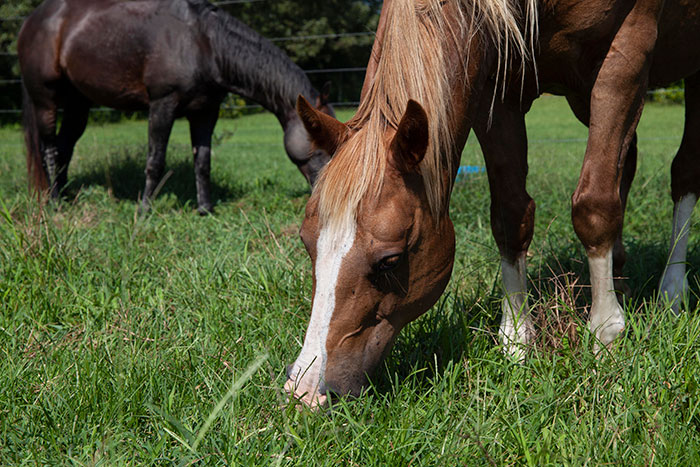 With its drought, low soil pH, and high stocking density tolerance, tall fescue is the forage of choice in many pastures. While it may come off as a “super grass,” tall fescue can cause major health and reproductive issues in some animals.

“Certain varieties of tall fescue are infected with the fungus Neotyphodium coenophialum,” explains Smarsh. While this fungus is great for the plant since it protects against drought and some insects, it isn’t so great for grazing animals.

The fungus produces ergot alkaloids, which have harmful physiological effects in grazing animals, including pregnant broodmares.

Fescue toxicosis is a major risk if pregnant broodmares consume infected tall-fescue. Some of the many symptoms of fescue toxicosis include abortions, stillbirths, and weak foals.

The exact amount of ergot on a given pasture varies depending on the time of year, the amount of fertilizer present, and plant variation.

The real kicker is that you can’t tell if tall fescue is infected or not just by looking at it; the grass has to be tested.

Take tall fescue samples in early summer and fall when grass is growing rapidly. The exact time to sample is highly dependent upon weather and region.

What can be done to mitigate the issue with pregnant broodmares?

If pastures test positive for endophyte-infected tall fescue, remove pregnant broodmares 60 to 90 days before foaling. Another option is to treat mares with domperidone to relieve most toxicosis symptoms. Consult with your veterinarian before taking this approach.

If enough space, time, and money is available, renovating pastures to remove the infected tall fescue is a possible option. Tall fescue can be removed with an herbicide and replaced with other cool-season grasses or endophyte-free tall fescue.

“This process can be costly and take several years, so it might not be the best solution for everyone,” Smarsh warns. She also notes that it is difficult to remove all infected tall fescue.

If a mix of cool-season grasses is used, identify the percentage of tall fescue in the stand. If the percent of tall fescue is small, there is less risk for broodmares to contract toxicosis. Even so, the best management option is to remove them 60 to 90 days before foaling.

Is a longer chop better? Next