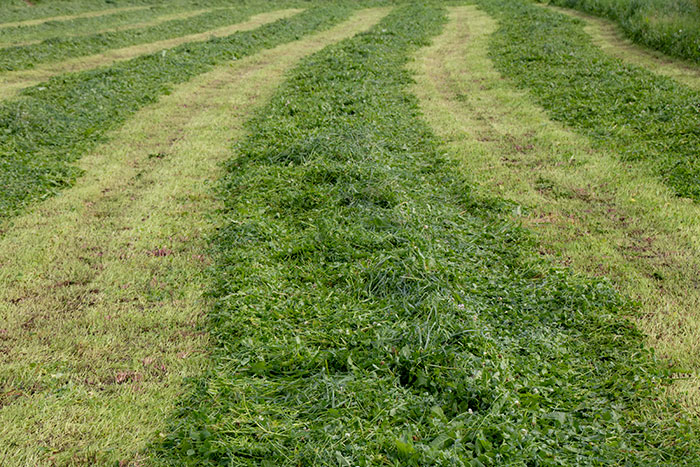 All forage loses dry matter and forage quality after it is cut. It is a fact of life. But the amount of loss is greatly influenced by subsequent practices.

Dan Undersander, retired forage agronomist and professor emeritus at the University of Wisconsin-Madison, recently offered some insight to reducing the loss of dry matter and forage quality in the Midwest Forage Association’s Clippings newsletter.

One overlooked contributor to dry matter and forage quality loss is respiration after mowing. Respiration is a process where plants break down stored sugars to create energy (or heat) and carbon dioxide.

While respiration occurs in growing plants, it also continues after cutting. It even takes place in baleage and silage, generating heat.

“Data suggests that 2 to 8 percent of forage dry matter may be lost due to respiration,” says Undersander. “At current hay prices in the Midwest of $220 per ton, a 4 percent dry matter loss has a value of $8.80,” he adds.

Losses in the West are greater where forage is cut with large cutter bars and put into windrows. While hay in wide swaths can be baled in two days, windrowed hay takes five to seven days to be dry enough for baling.

A faster drying time not only lowers the amount of dry matter lost. It also gets the hay off the field faster, resulting in less wheel traffic damage to regrowth, which produces higher yields in subsequent cuttings.

Respiration also leads to substantial forage quality loss. Starch and sugar are fully digestible, and a loss of sugar and starch elevates the percentage of the remaining components of the forage.

For example, a 4 percent loss in sugar and starch would raise the neutral detergent fiber (NDF) by more than 3 percent. This equates to a drop of about 20 points of relative forage quality (RFQ).

If alfalfa was cut slightly below 40 percent NDF and lost 4 percent sugar and/or starch, then the forage quality would be above 40 percent NDF, which currently sells for around $50 less per ton.

So, how can respiration loss be minimized?

One good practice is to spread forage into wide swaths. This allows more sunlight to be captured, and stomates, the breathing holes in leaves, stay open to allow for quicker drying.

“Manage hay to dry to 60 percent moisture or less as quickly as possible, but at least on the day it is cut,” Undersander says. Respiration drops significantly once moisture is below 60 percent.

When hay is put into narrow windrows immediately, drying slows down and respiration rates are elevated for a prolonged period of time unless those windrows are spread out using a tedder.

“If a grower insists on putting forage into a windrow and taking the respiration losses of sugar and starch, then the forage must be cut earlier to be below 40 percent NDF at baling or chopping,” Undersander says.

However, cutting earlier to accommodate respiration loss results in a 10 percent yield loss and added stress on the stand, which shortens stand life.

A second option to reduce respiration losses is to make haylage in a pile, a bunker, or by wrapping bales in plastic. Since respiration requires oxygen, limiting the amount of oxygen available will cause respiration to stop.

Realistically, a combination of quickly drying cut forages to 60 to 65 percent moisture in a wide swath and limiting available oxygen for respiration are most effective.

Along with rapid drying, getting hay off the field faster will also boost the yield of the following cutting.