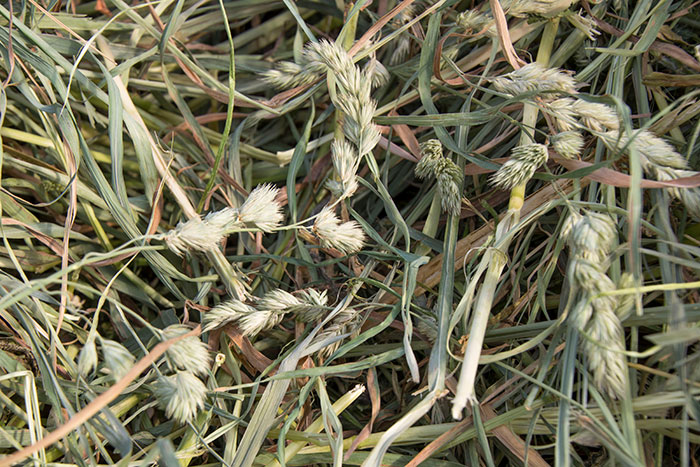 From my travels around the U.S., it has become obvious that orchardgrass is a foundational perennial forage in many livestock systems where adequate moisture (rain or irrigation) and moderate temperatures prevail for much of the growing season.

What’s most surprising is how many ways it’s being used.

To be fair, not everyone is an orchardgrass disciple. Most farmers either love it or hate it and there’s very little middle ground. I recall one farmer telling me that he wanted nothing to do with the species because its bunchgrass growth habit made fields too (insert expletive) rough to drive over.

Though grazing orchardgrass has been and continues to be a popular practice, I’ve noticed a great many pastures are dominated by the species; in fact, it’s not uncommon to see pure orchardgrass pastures.

Perhaps even more interesting than its grazing use is how many hay producers are using orchardgrass to extend the life of alfalfa stands being cut for dry hay, chopped for haylage, or wrapped up as baleage. I have seen this approach being used from Maryland to California.

The strategy is relatively simple. As alfalfa stands thin during the third or fourth year, orchardgrass is being no-tilled into the existing alfalfa, usually in late summer or early fall. These fields then go through a metamorphosis from pure alfalfa to alfalfa-grass to nearly pure grass stands, and productive stand life is extended by three or four years.

Among the advantages of growing orchardgrass is simply the sheer number of potential varieties from which to choose compared to most other cool-season grass options.

One of the key differentiating features of these varieties is maturity. Selecting a late-maturing variety is important when including the grass in alfalfa stands; otherwise, the orchardgrass becomes cordwood by the time the alfalfa reaches ideal harvest maturity in the spring.

One of problems that some producers experience with orchardgrass is foliar disease. Varieties differ substantially in their ability to resist disease, especially leaf pathogens. Make sure you’re selecting an orchardgrass variety that has strong disease resistance.

In some regions, winter survival is also a problem. Once again, this can vary with the variety planted.

The number of orchardgrass breeding programs and also the number of variety performance trials have declined in recent years; however, some universities still carry out this worthwhile mission. Michael Casler, a grass breeder with the USDA Dairy Forage Research Center in Madison, Wis., has been working on the development of a “headless” orchardgrass. Time will tell if that comes to fruition.

In the March 2018 issue of Hay & Forage Grower, Ray Smith, an extension forage agronomist with the University of Kentucky, described an interesting study he was involved with that compared the performance of 13 different orchardgrass varieties with each planted at five distinctly different locations (Utah, Wisconsin, Kentucky, Pennsylvania, and Virginia).

In the article, Smith wrote: “The most important finding from this research is that maturity is highly dependent on location, and it is important to seek out maturity information from trials in your state or region before choosing a late-maturing orchardgrass variety for your farm.”

This finding makes selecting a high-performance orchardgrass variety for a specific region more difficult unless you happen to be near a variety testing site. Most orchardgrass varieties are marketed nationally, but not all may be adapted as such.

Perhaps the differing opinions of using orchardgrass in pastures and hayfields can partly be attributed to an individual’s experiences with a specific variety that was either well suited or not well suited to the specific location.

What we do know about orchardgrass is there are huge differences in performance among varieties. We now also know that those differences get shuffled from region to region. Nevertheless, it’s readily apparent that we can include orchardgrass as a foundational resource in U.S. livestock production systems and farmers are finding a multitude of ways to exploit its utility.

Experiences with eastern gamagrass Next