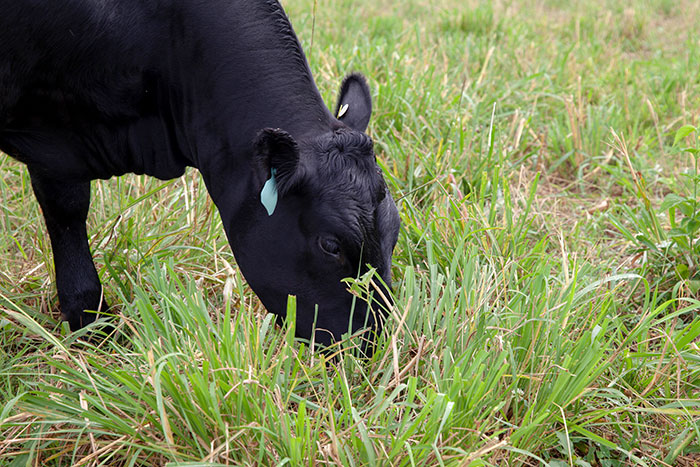 I found myself sitting in a pasture, camera in hand, amongst a group of very docile Angus heifers at the East Tennessee Research and Education Center a few miles south of Knoxville. Once the heifers got acclimated to my presence, most went back to chomping on grass.

The grass they were ferociously consuming was not tall fescue, or any other cool-season species for that matter. It was a pure stand of eastern gamagrass, which, if you’re not familiar, is a warm-season, bunch-type, perennial grass thought to be a distant relative of corn. 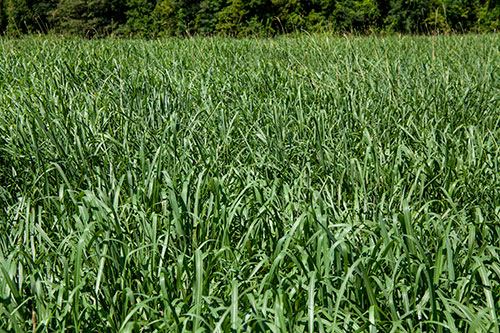 This wasn’t my first experience with eastern gamagrass. About 10 years previous, a group at the Marshfield Ag Research Station in Wisconsin had investigated the species as a possible high-fiber component in dairy cow and heifer diets. They planted the grass in 30-inch rows as you would a row crop.

While visiting the Marshfield facility, I recall being impressed with the volume of material that was being produced. Of course, the researchers were aiming for maximum yield, not forage quality.

While driving back to Wisconsin from Tennessee, I stopped at a farm owned by Toby and Debby Dulworth, located a little west of Paducah, Ky. The Dulworths are big believers in diverse forage offerings for their herd of Hereford cattle.

As we walked their numerous pastures, it wasn’t long before we came upon a field of pure, weed-free eastern gamagrass. Debby explained that the field had been seeded over 20 years ago.

When I visited in 2018, the Dulworths had grazed the eastern gamagrass in May and then took two more cuttings of hay before the growing season’s end. They couldn’t say enough good things about eastern gamagrass.

Eastern gamagrass has many desirable qualities, especially as a warm-season species. It typically will begin to grow earlier in the spring than some other warm-season grasses such as bluestem or switchgrass. As a relatively high yielder, it helps fill that cool-season grass summer slump.

Beneficial attributes aside, eastern gamagrass is not without its quirks. Topping that list is getting the grass established.

Eastern gamagrass seed exhibits seed dormancy; this has to be overcome by a prolonged chilling period, which is referred to as stratification. There are several ways that this can be accomplished. The first is to wet the seed and put it in cold storage for six to 10 weeks prior to seeding. Some seed vendors will do this for you.

A second approach is to plant the seed during late fall or winter and let Mother Nature do the stratification for you. There is some risk to this approach as the seed will have to break dormancy before favorable conditions for germination occur.

Finally, the Gamagrass Seed Co., in Falls City, Neb., provides a treated seed (the process is tabbed Germtec II) that eliminates the need for refrigeration before planting. Of course, it comes with a higher seed cost.

Eastern gamagrass is slow to establish, so don’t expect big production in the seeding year. Once it does establish, it’s recommended to leave at least a 6- to 8-inch grazing or cutting residual above the crown because carbohydrates for regrowth are stored in the leaf bases. Eastern gamagrass is known to develop wide and sometimes tall crowns.

If eastern gamagrass is grazed, make sure some type of rotational system is used. The species is not tolerant of low and frequent defoliation and doing so will ensure stand loss.

Although Eastern gamagrass requires management that is slightly different than most mainstream cool-season grasses, the effort might be worth the trouble to establish a perennial warm-season alternative that will fill the summer slump or produce copious amounts of hay.

I have never gone out looking for eastern gamagrass, but where I have found it, the producer has been pleased with its utility as a forage source.

There are a number of good resources on the internet that discuss eastern gamagrass and its management. A good place to start is this USDA bulletin or this extension bulletin from the University of Missouri.