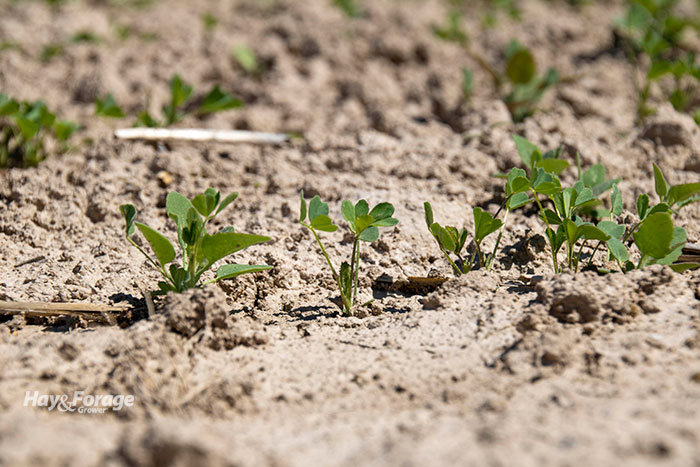 What makes alfalfa such an interesting crop to study and try to understand is what also makes it so frustrating.

I quit trying to predict alfalfa winterkill years ago. Although we know the laundry list of factors that contribute to dead alfalfa in the spring — ice, extreme cold, snow cover, cutting schedule, stand age, variety, and potassium fertility — there is still no way to adequately prevent or predict winterkill with any high degree of success.

Even when winterkill does occur, it’s often difficult to decipher why certain patches in a field succumbed to nature’s wrath and other areas didn’t. It might be interesting to theorize the cause, but it’s also frustrating not to have definitive answers.

Alfalfa autotoxicity is another phenomenon that has puzzled farmers and growers alike for generations. As much as we sometimes would like and need to, seeding alfalfa immediately after a terminated alfalfa stand without a significant time lapse is simply a widely accepted no-no.

Medicarpin is thought to be one of the primary compounds produced by alfalfa that makes it autotoxic, but there are others and maybe even more important ones that haven’t been identified yet.

On sandy soils, where the toxins are readily available and more easily taken up, the autotoxic effects are more acute but are less persistent because the toxin is thought to leach more quickly through the root zone.

On heavier textured soils such as clay, the toxins are more tightly adsorbed to soil particles. Consequently, the effects are less pronounced but longer lasting. The autotoxic compounds are microbially degraded over time, so conditions that favor microbial growth such as warm, moist soils reduce the persistence of the toxins.

Like winterkill, it’s always been difficult to accurately predict when alfalfa autotoxicity is going to come into play. Kim Cassida, an extension forage specialist with Michigan State University, is in the middle of a research project with a goal of developing a test for autotoxicity.

The premise is that farmers and consultants could send in a soil sample that would be tested via seed germination and analysis of root growth.

“We’ve already noticed large differences between soils and observed deformed root growth in some, but not all, cases,” Cassida said at the Great Lakes Forage & Grazing Conference last week.

Here’s the kicker: Cassida is also picking up large differences between different alfalfa varieties. In other words, on the same soil, the impact of autotoxicity differs with the variety seeded.

If Cassida’s ultimate goal of developing a quick turnaround test for autotoxicity analysis comes to fruition, this variety quirk will mean that farmers will not only have to send in a soil sample but also a sample of the seed that they intend to plant. It also means we can add to the bevy of known factors that impact alfalfa autotoxicity.

In the future, Cassida’s work might also lead to a recognized test whereby alfalfa varieties could be categorized for autotoxicity tolerance on some scale similar to what is done for disease and insect tolerance.

Until more answers are known, autotoxicity will remain a factor that alfalfa growers will have to work around. As a general rule, at least one year between alfalfa stands is recommended to realize full yield potential of the new seeding.

Ten irrigation tips for dairies Next