Something fishy is going on with alfalfa 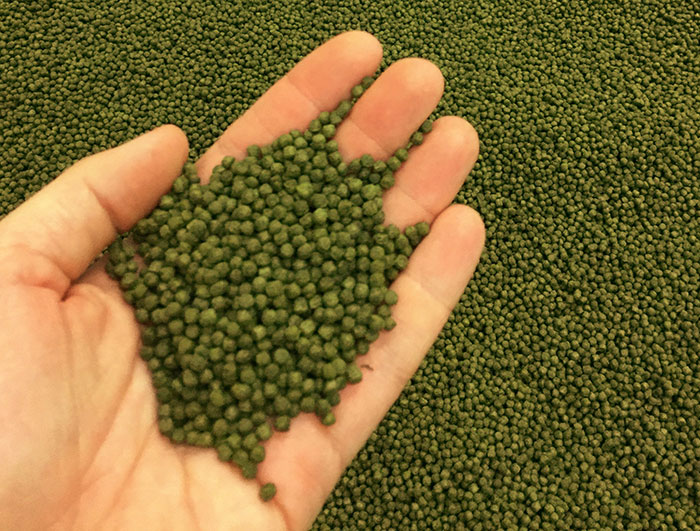 Alfalfa is known as the Queen of Forages for its superior quality and versatility of use in the livestock industry. Now, it might just become the Queen of Fish Food, too.

United States Department of Agriculture (USDA) Agricultural Research Service (ARS) scientist Deborah Samac is leading a team to find suitable alternatives to the traditional fishmeal-based food used in the aquaculture industry today. This fast-growing sector of the food industry is raising concerns about supply and demand as the global markets for both the food products and fishmeal continue to grow.

Typically, alfalfa is used as a forage fed to dairy cattle, beef cattle, and horses. Samac and her team are juicing the legume to create an alfalfa protein concentrate (APC) from alfalfa leaves, which is further processed into pellets that can be fed to farm-raised finfish and shellfish. This research into sustainable alternatives is partly in an effort to relieve some of the pressure on the ocean-caught species used to make the fishmeal products currently used.

As a legume, alfalfa contributes a lot to the environment, and the APC also presents a robust profile as a feed ingredient. APC includes a crude protein content of 15% to 22%; vitamins A, B, and D; and minerals like magnesium and copper. Before reaching the water as fish food, though, the alfalfa crop fixes nitrogen in the soil for its successors, conserves soil, and enhances soil quality. Its blooms also provide food for wild and domesticated pollinators.

Samac and her collaborators completed the first phase of trials on yellow perch. Fish that were fed the APC pellets didn’t gain quite as much weight as the fish on a traditional fishmeal diet. Other aspects such as fillet yields, quality, composition, and taste were very similar to traditionally raised yellow perch. Samac and her team have concluded that more trials are needed to iron out the fine details of processing and formulating the APC pellets. Additional studies, which include rainbow trout, are currently underway.

Forage Poll: What is your primary means of selecting an alfalfa variety? Next

Forage Poll: How would you rate your forage inventory going into winter? Previous