Hay quality is a lifestyle at Hardrock 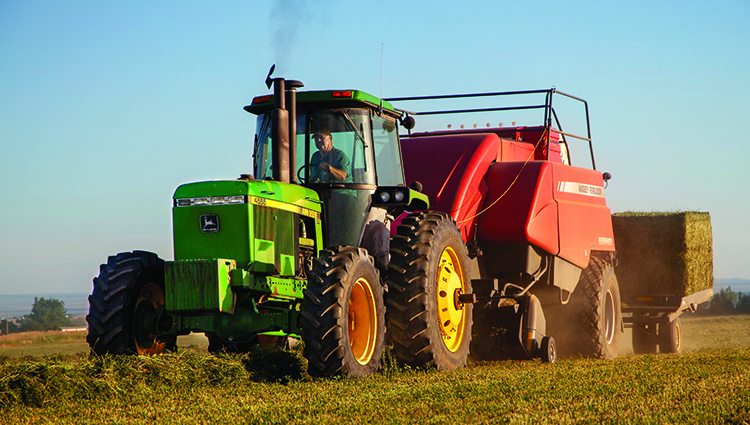 Wyoming farmer David Hinman bales alfalfa in the early morning or late evening, after dew has added moisture to the bone-dry crop.

It was 1984 when David Hinman had recently broken away from his family’s farm in Nebraska and took a chance on renting 400 acres of flood-irrigated land near Wheatland, Wyo.

He was both young and industrious. 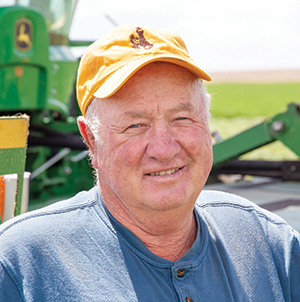 David Hinman was named Grand Champion Forage Producer in this past year’s World Forage Analysis Superbowl.
During that first year, a friend, who was helping Hinman get on his feet with the new venture, examined the young farmer’s field of cut alfalfa — a crop that had been established by the previous operator. Hinman’s friend turned to him and said, “I’ll meet you at midnight to get it baled.” Hinman, who had previously only had experience making hay for his family’s beef herd, was a bit shocked at the request for a midnight rendezvous, but he heeded to the plan.

“That’s the night I learned how to make high-quality alfalfa,” Hinman said

Through art and science, Hinman and his wife, Teri, have been honing their haymaking skills ever since. For 20 years, their Hardrock Farms name has regularly appeared high on the leader board of the World Forage Analysis Superbowl held each year in Madison, Wis., during World Dairy Expo. In 2020, their hay sample in the commercial hay division topped all other contest entries with a relative forage quality (RFQ) of 405 and a milk per ton value of 4,062. Hardrock Farms was named Grand Champion Forage Producer during a virtual awards ceremony last October.

Hinman grew up on the family farm near Mitchell, Neb., where he graduated from high school and started college on a track scholarship. Initially, he had no desire to make farming a career. During the summer after his freshman year, he worked for an irrigation company, which helped spark a renewed interest in going back to the family’s row-crop and beef operation. Hinman halted his college life and returned to the farm, but soon after, so did his younger brother.

“With additional land hard to come by in Nebraska, my dad sold the Nebraska farm and moved us out to Colorado,” Hinman explained. “But obtaining enough water for irrigation proved to be a problem, so back to Nebraska we went in the late 1970s.” As before, finding sufficient additional land to support each of the boys proved to be challenging.

“I got to talking to a friend who knew of a farm near Wheatland, Wyo., that had a contiguous 400 acres with a house and a shop,” Hinman said. “In 1984, and against my father’s advice, I decided to rent that flood-irrigated farm, and we’ve never looked back.”

After four years of renting land, he bought a nearby farm with pivot irrigation for $325 per acre during a depressed, late-1980’s economy. “I paid it off the first year growing dry beans,” Hinman chuckled. During the ensuing years, he bought several more farms in the area.

Currently, Hinman farms about 750 acres of alfalfa and has six irrigation pivots. He also has some pasture acres that are pivot irrigated and keeps a herd of about 200 brood cows, which his daughter, Kellie, oversees. Another daughter, Kristen, lives off the farm in Cheyenne. 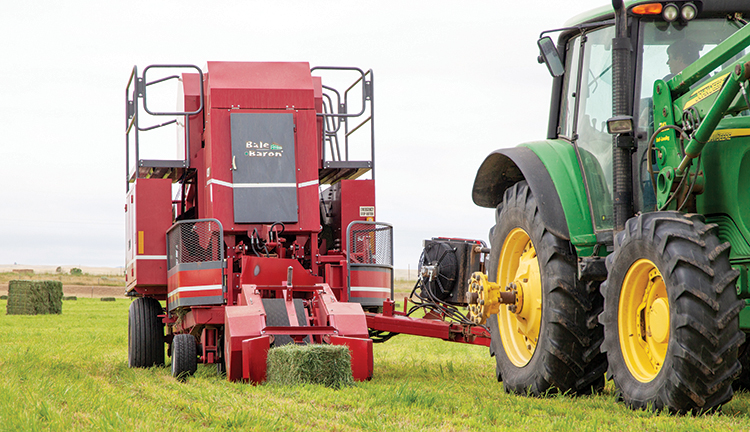 Teri Hinman collects small square bales of orchardgrass with their Bale Baron, which creates a 21-bale bundle for ease of handling and trucking.

Wheatland (population 3,565) is located in southeastern Wyoming, roughly halfway between Cheyenne and Casper on Interstate 25. It sits at an elevation of about 5,000 feet. Summer days are hot and dry. According to Hinman, they usually get 7 to 11 inches of precipitation per year, which mostly falls in the winter and early spring. Buffering this extreme weather are cool summer nights. That’s what offers Hinman his forage quality advantage, as overnight respiration losses to wilting alfalfa are minimal.

Hinman cuts his alfalfa into a 3- to 4-foot swath and then lets it lay until it’s ready to bale. “Sometimes, we have to rake early in the morning,” Hinman noted. His approach for determining when the alfalfa is ready to bale is pretty simple — the stems have to crack or break when bent during the day. When this occurs, the hay will normally be baled very early the next morning, assuming there is enough nighttime dew moisture that has rewetted the crop. When needed, an organic acid is applied to the hay if the moisture content is slightly higher than desired, which is usually only during the third and fourth cuttings.

All of the baling occurs either very early in the morning or late at night. One of Hinman’s most cherished haymaking tools is his WeatherBug cellphone app. He routinely checks for the hour-by-hour relationship between humidity, dew point, and temperature. He’s looking for a chance of dew, which occurs as the temperature and dew point converge. “If I see that the temperature and dew point are within 6 to 8 degrees of each other, I know that a light dew is possible,” Hinman said. “No hay is baled before its time.” 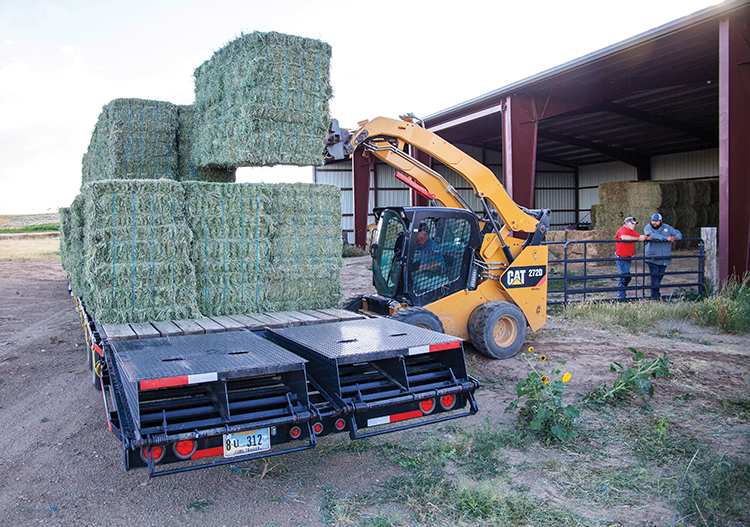 Hinman loads bundles of small square orchardgrass bales for a customer. Most of these grass bales find their way into the Colorado horse market.

To achieve a high volume of top-quality alfalfa, Hinman begins by seeding 22 to 24 pounds of seed per acre with a 20-foot Great Plains drill. “I like to ensure a thick stand is established in that first year,” he said. “I usually begin seeding around May 10 and control any weeds with conventional herbicides.”

Hinman only grows a limited acreage of traited (Roundup Ready and HarvXtra) alfalfa varieties because his primary customer base requests non-GMO feed. He tests a lot of alfalfa varieties himself. “I probably have 20 different varieties across our fields right now,” the veteran haymaker noted. “I’ve pretty much determined that you can harvest top-quality hay from just about all of them. Making high-quality hay really comes down to two things: weather and time of cutting.”

Almost all of the hay is cut by Teri with a John Deere 16-foot rotary disc mower-conditioner. She also does any raking that is needed, using an H&S twin wheel rake. Hinman has a Massey Ferguson 2180 large square baler and a Massey Ferguson small square in-line baler. Recently, they also added a Bale Baron to the machinery line, which picks up the small square bales and bundles them into 21-bale blocks for ease of handling and loading. 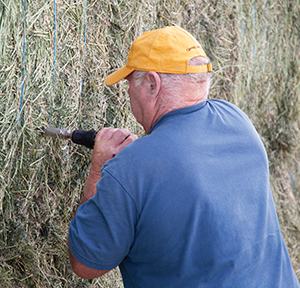 All of Hinman’s hay is sampled and tested. Alfalfa is shipped to Amish goat dairies in Iowa. They demand 180 RFV or higher.
Hinman gets five to six production years from his alfalfa stands after the seeding year. Fields are harvested three or four times per season and yield 5 to 6 tons of dry bales per acre. If a field is harvested four times, the final cutting is taken in October; this is usually the highest quality cutting of the year.

The farm is located within the largest privately held irrigation district in the United States. To date, water availability from the snow-fed reservoirs has not been a limitation. Hinman will usually apply 18 to 24 inches of water per year through his pivots. He can get three to four passes with the pivot between each alfalfa cutting, generally applying a total of 6 or more inches per crop.

“Our primary pest issues are alfalfa weevils, grasshoppers, and aphids,” Hinman noted. “We try to sample soil every year so that our fertility stays in line. Our native soil pH around here is 8, so liming isn’t a concern.”

When alfalfa stands are terminated, Hinman will either rent the field to a neighbor who grows sugar beets or he will plant and harvest corn himself. If corn is grown, he’ll allow the beef cows to graze the stalks in the fall.

Most of Hinman’s large square bale production, especially the high-quality hay, is earmarked for Amish goat dairies near Kalona, Iowa. The tight-knit Amish community contacted Hardrock Farms after reading about its success in the World Forage Analysis Superbowl contest. Hinman has been selling to the Amish for nearly 10 years.

Hinman explained that a typical Amish goat dairy will milk about 150 to 160 goats. “I service about 40 to 50 of these operations, and they demand that their hay test at least 180 relative feed value (RFV). As a group, the Amish line up the trucking to get the hay from our farm to Kalona, using mostly backhauls. They want all of their hay kept inside, so I bought a steel building and they came out and put it up. It’s been a really good relationship,” he added.

Typically, Hinman stacks his large square bales outside and untarped. “We can’t tarp bales because the wind is so ferocious during the winter that tarps just get obliterated. A lot of people who move out here can’t tolerate the high-velocity winter winds and will move away pretty quickly or only stick around in the summer.”

All of Hinman’s hay gets sampled and tested. He always strives for top-notch quality but his best effort to date was his entry into last year’s World Forage Analysis Superbowl. Hay that doesn’t meet goat-quality standards is sold to customers with beef cattle operations.

In addition to his pure alfalfa fields, Hinman also harvests some acres of alfalfa-grass mixtures that are both his own and rented. He also has a few fields of pure orchardgrass that is generally harvested as small square bales.

Small square bales account for about 15% of Hinman’s total production. “It’s basically Teri’s hobby,” he said with a smile. “There’s a big demand for the small squares because nobody wants to do them anymore. We ship a lot of ours to the horse and goat markets in Colorado.” 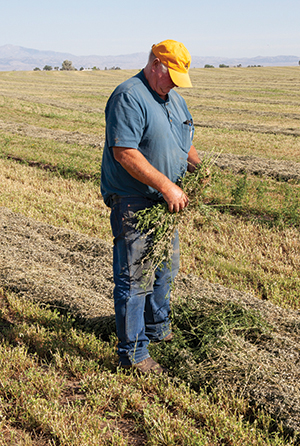 Hinman uses the “snap” test to gauge when his alfalfa is ready to bale. Once the stems break, he typically bales with the next dew occurrence.
Hinman’s foray into the hay contest world began about 20 years ago. Each year at the Wyoming State Fair, there is a hay show and contest as a part of the other annual festivities. It was here that Hinman began entering his best wares.

The organizers of the Wyoming hay event always forward the best samples to the World Forage Analysis Superbowl in Wisconsin. Hardrock Farms, along with other Wyoming hay producers, have consistently had winning or high-placing entries in Madison. “Most of our contest entries are fourth cutting from the previous fall,” Hinman noted. “The cool temperatures and slow growth usually make for the best forage quality.”

Hinman and his wife travel to Madison each year to take in World Dairy Expo and the activities surrounding the World Forage Analysis Superbowl. In doing so, they often stop to visit and have a meal with their Amish goat dairy friends in Iowa.

Whether it’s for a contest, an Amish goat dairy, or Colorado horses, you can be sure that the hay being shipped from Hardrock Farms will be of top-notch quality. Sure, the environment helps, but it’s been a lifetime of honing his haymaking skills that is mostly responsible for Hinman’s success. And to think it all started at midnight in a rented alfalfa field.

This article appeared in the February 2021 issue of Hay & Forage Grower on pages 16 to 18.