He uses every possible forage tool 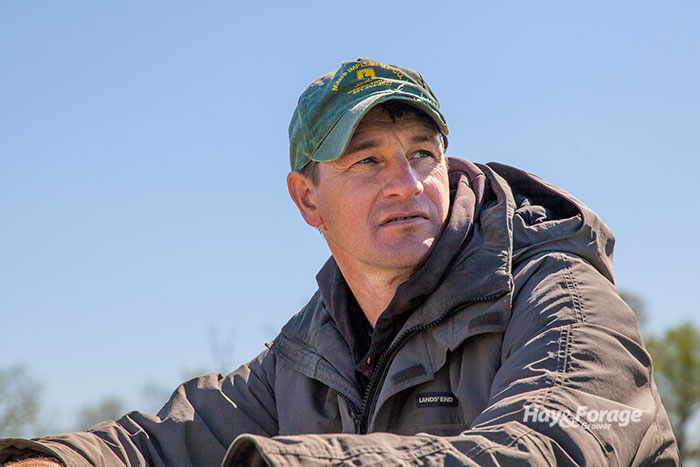 Matt Hoien grazes cattle in the bermudagrass-tall fescue transition zone of central Arkansas and strives to maintain a long grazing season.
Much of Matt Hoien’s bermudagrass and tall fescue is currently standing idle, accumulating dry matter for the winter ahead. But stockpiling forage is only one of the strategies he uses to keep hay feeding to a minimum. He checks most of the boxes when it comes to recommended strategies for profitably raising beef cattle on pasture.

Hoien grazes 275 brood cows on about 700 leased grazing acres near Atkins, Arkansas. He also has 100 acres of dedicated hayfields that are predominantly bermudagrass and crabgrass. Farming with his wife, Rachel, and their three children, Craig (15), Audrey (13), and Levi (11), the Hoiens have built a successful cattle operation that didn’t even exist until 2008.

“I came to this area as an employee of Tyson Foods to work on hog buildings,” Matt explained. “When they closed in 2002, I had been doing some part-time work for the owner of this farm, and I just started working here full time. Eventually, he wanted to retire, so I bought some of his cows and leased the farm.” 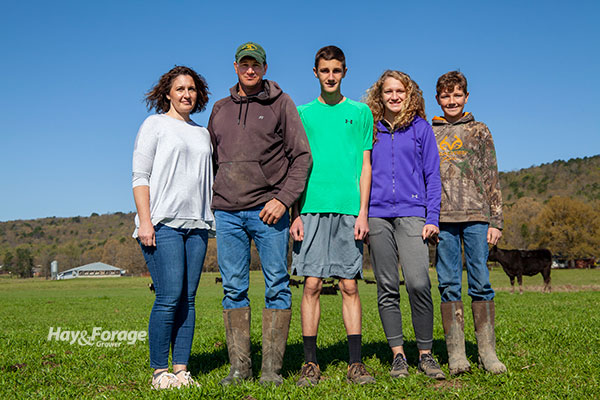 The entire Hoien family is involved with the cattle operation. From left to right are Rachel, Matt, Craig, Audrey, and Levi.

The Hoiens’ farm borders the Point Remove Creek and is prone to flooding, or at least remaining wet for extended periods. “When it’s dry, our land provides an advantage, but most of the year it’s a bit of a hassle,” Matt said. “In some pastures, we just have to move cattle out if heavy rain is coming because they’ll get flooded in.”

Hoien maintains both a fall and spring-calving herd. His calving seasons run from March through April and September through November. Calves are backgrounded for 90 to 100 days and sold February to March (spring calves) or June to October (fall calves), depending on pasture condition and the markets.

Located in the transition zone of central Arkansas, Hoien has a plethora of forage options, and he uses them all. His base summer pasture is primarily bermudagrass and crabgrass, and white clover persists across the farm. There is also about 100 acres of tall fescue pasture that he’s actively transitioning to novel endophyte varieties.

“The approach we’ve taken is to apply glyphosate in the spring, plant a smother crop of pearl millet, make another glyphosate application in the fall, and then seed the tall fescue,” Matt explained. “Over the years, I have tried and continue to test several different novel endophyte varieties.”

In late August, Hoien pulls cattle off his established fescue, applies 50 pounds of nitrogen fertilizer, and then doesn’t start grazing those fields again until mid-December or later. Novel endophyte tall fescue is being established using the spray-smother-spray approach. Pearl millet is used as a smother crop.

It’s not that Hoien doesn’t make hay. In fact, he makes about 2,000 round bales per year, keeping a close eye on forage quality. All of his hay is stored under a roof. His bermudagrass-crabgrass bales often test near 60 for total digestible nutrients (TDN). Last winter, the fall-calving cows were exclusively fed hay for only 40 days. “I’d like to be able to cut that down to a shorter period,” Matt said.

The winter annual program includes seeding ryegrass into bermudagrass pastures in the fall. In 2020, Hoien also fall seeded 25 acres of oats and turnips. Surprisingly, both came through the winter.

All of the stockpiled forage gets strip grazed to maximize utilization. The frontal wire is moved every two to three days.

For fall-grazing dry cows, Hoien stockpiles bermudagrass, which gets them through mid-December, then they are fed hay until about mid-March when the ryegrass is ready to graze. The fall-calving cows graze stockpiled fescue during winter, have limited access to ryegrass and oats/turnips, and they get some hay. They are rotated on and off pastures.

To keep his forage base productive, Hoien uses poultry litter and purchases commercial urea and potash. Hayfields are fertilized after each cutting, and his ryegrass receives 60 pounds of nitrogen per acre in the spring. 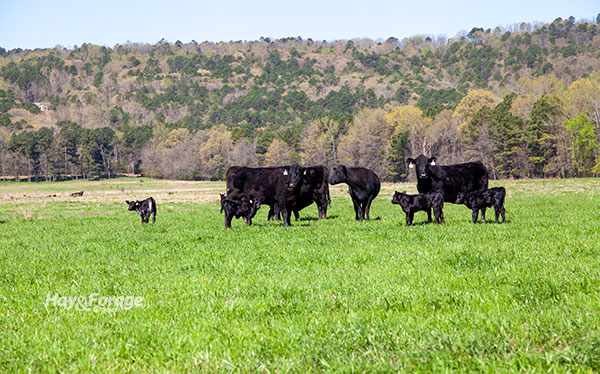 Cows and calves graze ryegrass in the spring.

Although it’s not a major part of the business, the Hoiens have been growing a direct market and freezer beef enterprise.

“That’s Rachel’s thing,” Matt said. “I only deal with the live cattle.”

Their cull cows are being processed for ground beef, which is purchased by a couple of schools and two retail businesses in Little Rock.

Any heifers that don’t breed are kept until they are about 2 years of age and then processed to be sold as quarters and halves. Meat cuts are also sold at a large farmers market. The meat is marketed as “pasture raised” or “grass-fed.”

“The meat is definitely leaner, and some people like it while others don’t,” Rachel said. “COVID-19 really increased the demand for direct-marketed freezer beef. We strive to direct market at a price where the average family can afford it.”

Everything seems to be growing at the Hoiens’ farm: forages, cattle, kids, knowledge, and marketing successes. Despite this, farming a large chunk of flood-prone creek-bottom land continues to present unique challenges. “I still need to find a forage that tolerates periods of standing water,” Matt said. Don’t bet that he won’t.

They focus on consistent, digestible forages Next

Taking a shot at the grazing game Previous