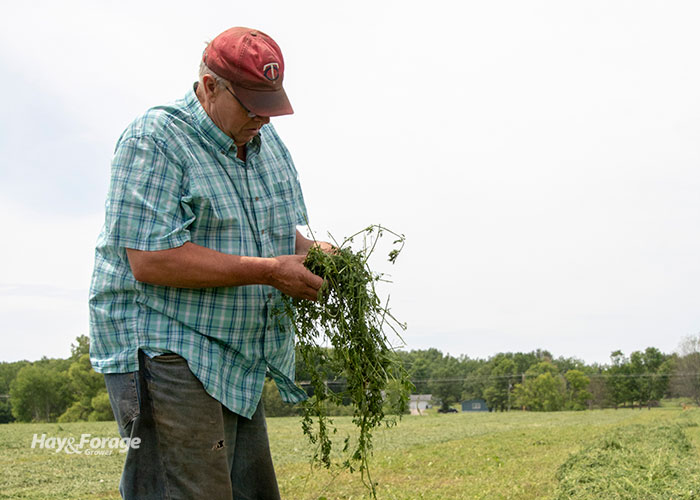 “One of the major factors negatively impacting harvested alfalfa forage quality is leaf loss,” asserted David Weakley, director of forage research nutrition for Forage Genetics International. “In fact, a study from the University of Wisconsin showed that leaf percentage accounts for 71% of the variation in alfalfa quality.”

Weakley took the Dairy Forage Seminar Stage at World Dairy Expo in Madison, Wis., to introduce a new analysis for measuring the leaf percentage of an alfalfa sample.

The impact leaves have on forage quality shouldn’t be surprising given that alfalfa leaves can have a relative forage quality (RFQ) as high as 450 to 500 while stems have an RFQ of 120 down to 50, depending on the maturity stage. 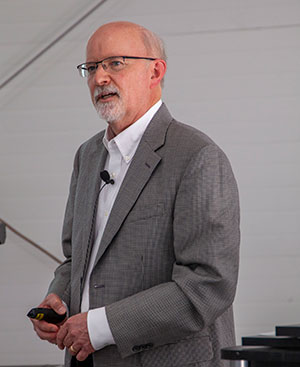 “Anytime I see a difference this big in nutrient profiles, it means there is an opportunity to develop prediction equations for the components,” Weakley said.

Going to the field

To test his theory, Weakley and his team collected 160 alfalfa samples in 2019 from several locations. The samples encompassed 43 different varieties managed under different cutting schedules.

The samples were hand separated into leaves and stems to determine the actual percentage of leaves for each sample. The samples were then analyzed for nutrient content, and it was found that neutral detergent fiber (NDF), crude protein (CP), and NDF digestibility (NDFD) were the major factors that best predicted the actual leaf percentage of a sample.

In 2020, a new set of 40 alfalfa samples were collected and separated into leaves and stems to obtain the actual leaf percentage. These values were then checked against the prediction equation that was developed the previous year, and the results were encouraging.

Combining the two data sets, Weakley was able to develop a robust equation that would predict the leaf percentage of a ground alfalfa sample using its NDF, CP, and NDFD at 28 hours. He called the analysis LEAF (Leaves Enhance Alfalfa Forage).

By running a wide range of additional samples through his equation, Weakley was able to determine that an average field of standing alfalfa is comprised of about 50% leaves, with a typical range of about 40% to 60%.

Relationship of leaf percentage to RFQ

“That’s pretty significant,” Weakley said. “You don’t have to lose very many leaves before you can turn really good standing alfalfa hay into dry cow hay.”

Economically, leaf loss is a killer for alfalfa producers. According to Dan Undersander, professor emeritus extension forage specialist with the University of Wisconsin, a 1%-unit loss of leaves drops the value of the hay or haylage by $7 per ton. The declining value encompasses both yield and quality loss, with the latter making up the highest percentage ($4.60 per ton).

With a test in place to measure leaf percentage, guidelines were needed to assess success or failure in saving leaves from cutting to storage. Leaning on some previous measurements of leaf loss between various field activities, Weakley and his team provided the following set of targets:

• More than 45% leaves = goal achieved. No action necessary, but higher levels are desirable.

• 40% to 45% leaves = caution. Some leaf loss has occurred, and there’s some room for improvement.

• Less than 40% leaves = significant leaf loss has occurred. Determine where leaves are being lost with the help of your agronomist, nutritionist, and/or machinery dealer.

“If the RFQ, NDFD, or crude protein is lower than expected for a sample, check for leaf loss as a potential cause,” Weakley said. “If leaf loss is excessive, you’ll need to find the cause, which could potentially be foliar diseases, harvest operations, or both.”

For producers who want to use the LEAF test, Weakley emphasized that the analysis is only accurate for pure stands of alfalfa. In other words, do not submit a sample that contains grasses or weeds.

Finally, the LEAF test currently can only be run at labs licensed for Calibrate HQ analysis. These labs include SureTech Labs, Dairyland Labs, Cumberland Valley, Rock River Labs, and Dairy One.

A staggering alfalfa challenge Next