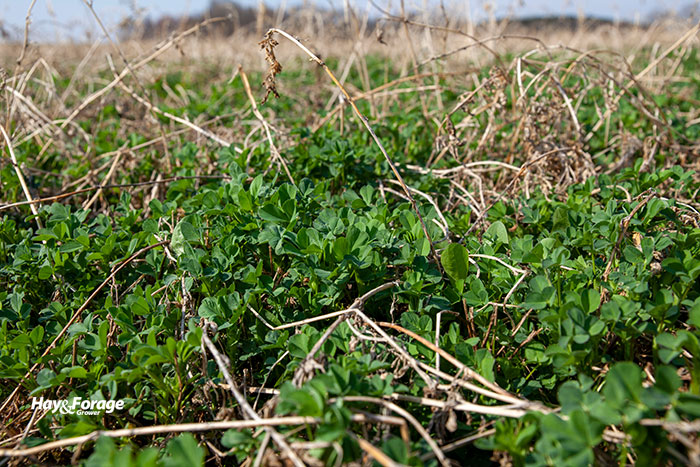 As the final days of August tick away, there is the realization that alfalfa plants will soon begin to downshift. This shifting of gears will be regulated by both environment and plant genetics, and the physiological changes means that the approach to harvest management must also change.

“Fall dormancy still matters,” proclaimed Kim Cassida, extension forage specialist with Michigan State University, during one of their recent Field Crops Virtual Breakfast webinars addressing fall alfalfa management. “Although fall dormancy rating is no longer highly linked to winter survival, it does tell you how fast a plant will regrow and how long its active growing season will be.”

A plant with a higher fall dormancy (FD) rating will exhibit less dormancy or more growth in the fall. Coupled with earlier spring growth and faster regrowth after cutting, less dormant alfalfa varieties generally have the highest yield potential.

For Michigan, Cassida suggests growers use alfalfa varieties with a FD rating of 3 to 5. “Pushing to an FD 6 rating can get us into trouble because plants don’t go dormant soon enough before winter sets in,” Cassida explained.

The forage specialist noted that the best indicator of a variety’s ability to survive winter is its winter survival index (WSI) rating, which is on a 1 (extremely winterhardy) to 6 (not winterhardy) scale.

“With declining temperatures and daylengths in the fall, alfalfa growth slows,” Cassida said. “At the same time, forage quality can be very high and does not decline rapidly with maturity.”

Within the plant, carbohydrates and nitrogen are translocated to the crowns to support winter metabolism and survival. At the same time, new buds for spring growth are formed.

Cassida explained that it takes about 500 growing degree days (GDD; 41°F base) for alfalfa plants to fully replenish roots after a fall harvest, at which point plants will be 8 to 10 inches tall.

She said the worst-case scenario is when alfalfa fields are cut and there is 200 GDD to 500 GDD between harvest and the first killing frost. It takes about six weeks in the fall to accumulate 500 GDD, and that’s why it has generally been recommended not to cut for that length of time before the first fall freeze.

For alfalfa growers who don’t cut their fields during that six-week window, there is the option of cutting near the last fall freeze date when the risk of significant regrowth (over 200 GDD) has passed.

“If you do cut late, leave taller stubble to help trap snow, moderate soil temperature, and protect crowns,” Cassida recommended. “Consider skipping a late fall cutting if you harvest every 28 days or less during the growing season. This just gives your plants a break,” she added.

It never hurts alfalfa stands to leave abundant growth in the fall, according to Cassida. She explained that leaves simply fall off and the remaining stems are incapable of smothering new spring growth.

“There are some risks and tradeoffs that come with a late fall cutting,” Cassida noted. “Forage yields are typically low in the fall, so this forage has a high cost per ton associated with it even though it’s often very high quality. It’s also been demonstrated that a late fall cutting will reduce the yield of the next year’s first cutting,” she added.

The forage specialist also reminded growers that soil potassium is critical for overwintering and stand persistence. “Low soil potassium is by far the most common problem I see when a producer is having alfalfa performance issues,” Cassida said.

“Fall is a good time to assess if an alfalfa stand is at the end of its economic lifespan,” Cassida shared. “A profitable stand has been shown to have more than 40 stems per square foot. Fall is an excellent time to terminate those stands that fall short of this benchmark because autotoxicity compounds can dissipate over the winter, and alfalfa is easier to kill in the fall,” she added.

An effective chemical kill requires at least 4 to 6 inches of actively growing alfalfa and three to four days of temperatures over 50°F after spraying.

Let LEAF be your guide to alfalfa leaves Previous