Look to alfalfa as a protein supplement 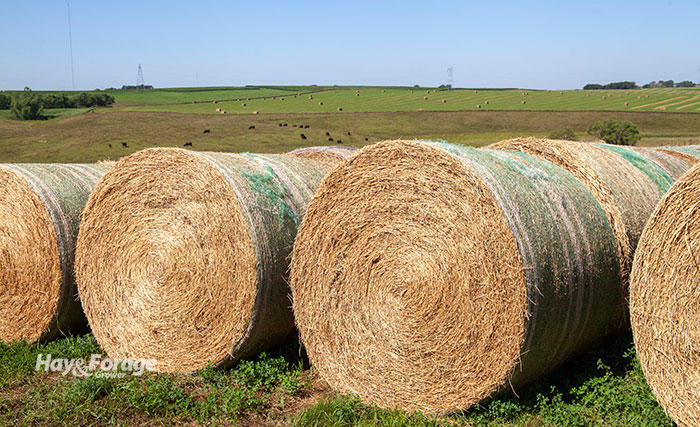 When determining protein supplements to feed cattle this winter, alfalfa may not be the first thing that comes to mind. However, alfalfa can be a valuable and cost-effective option.

“High quality hays are an option to supplement that I think are sometimes overlooked, but they offer such a value,” said Dana Zook with Oklahoma State University while speaking during a webinar series. “Due to the nutritive value alfalfa offers and the cost effectiveness, I really recommend considering alfalfa as a supplement.”

The extension livestock specialist noted that the supplementation needs of a herd will shift each year due to changes in the environment and resulting changes to forages and cattle.

To determine a cow’s supplemental need, evaluate it’s nutrient requirement and subtract that from the nutrient quality of hay in the pasture or hay being fed. This will reveal if there is an excess or deficiency and if a supplement is needed.

“Alfalfa is really a tale of two forages,” Zook said. “We consider grinding alfalfa to be around 17% or less crude protein, and what we use as a supplement has 18% minimum crude protein – usually around 18% to 22%. These two are totally different in terms of how cows use them, how they change the behavior of cows, and how producers use them.”

Zook recommended testing hay that will be fed as a supplement. “There is no way to efficiently feed or supplement hay or any sort of forage without knowing the quality,” Zook said.

When supplementing, it is important to consider energy as well as protein. According to Zook, a lactating cow needs about 10% protein in its total diet and a dry cow needs 8% protein. Total digestible nutrients required for a lactating cow is at least 58% and for a dry cow is a minimum of 54%.

Based on this year's feed prices, Zook noted that per pound of protein, alfalfa is a more cost-effective option than 20% protein cubes.

Alfalfa is also high in vitamin A, but concentrations will decline over time. “It is important to use new crop alfalfa and alfalfa put up this past summer,” Zook suggested. “By four months after alfalfa has been baled, the amount of vitamin A has really degraded, especially if its stored outside. After the alfalfa is used up, look to another vitamin A source later in the season.”

Consider feeding conditions that affect the delivered quality of alfalfa, such as where it will be fed, how it will be fed, the time of day, and so forth. “I feel strongly that alfalfa needs to be rolled out when fed as a supplement. In this way, cows can access it just like with conventional supplements,” Zook said.

“You will want to do a hay analysis and pair that with a knowledge of your bale weight,” Zook said. “If you don’t know the weight of your bales, you won’t know how much you’re feeding.”

In a 6-foot bale, the outer two inches hold about 11% of the bale’s volume. The outer 4 inches hold about 21% of the volume. “It is important to understand bale anatomy and that more hay is in the small outer edge of a bale,” Zook said. “When rolling the bale out, accuracy is so important. Also, consider that the outside of the bale is subjected to weather.”

Since the highest feeding value of alfalfa is in the leaves, alfalfa needs to be cut and baled properly to realize its full value. To maintain quality, it is best to store bales in an area that is well drained with a slight slope. Keep bale ends tight against each other and make single-layer rows in a north to south direction with 3 to 4 feet between each row. Expose bales to the sun at all angles and don’t row bales along tree lines or in the shade.

Since each cutting will have different characteristics, Zook recommends that each lot of hay be treated differently and sampled separately. Obtain accurate bale weights before feeding a lot.

“Feeding accuracy can take a little extra time but can be achieved,” Zook said. “The bottom line is to know your grass and its quality and know your cows, what stage of production they are in, and their needs.”

Hay waste will cost more this year Next