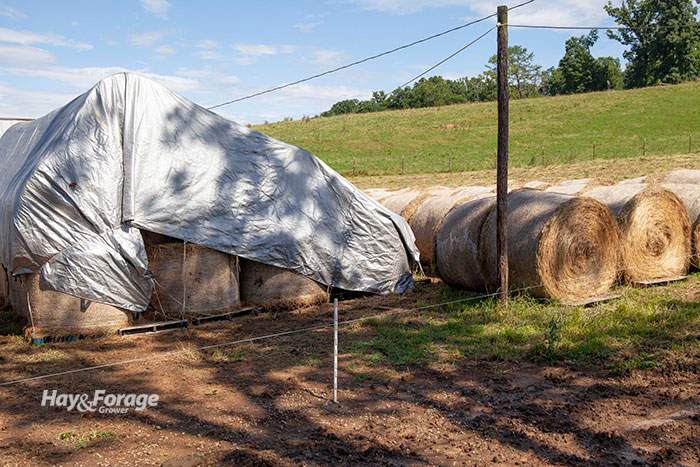 During each step of making, storing, and feeding hay, waste can add up quickly and become costly. With the current record-high prices seen in some regions, storage and feeding losses have never been more expensive.

“Improved hay storage and feeding is something we should look at every year,” said Brian Freking with Oklahoma State University during a recent webinar series. “Some of the waste can be controlled and minimized.”

Field losses will always occur when making hay, but certain areas of loss can be controlled. According to Freking, forage respiration losses can vary from 2% to 16%, depending on the area. Raking can cause 5% to 20% loss, which may depend on the type of rake. “The best rake to use for minimizing waste depends on your situation and location,” Freking said. “If you’re trying to dry something down quicker, a rotary rake may be better. If you’re trying to save on cost, the wheel rake might be the tool to use.”

The main factor that can’t be controlled when making hay is the weather. According to Freking, if hay is rained on after being cut, there can be dry matter losses of 8% to 17%, neutral detergent fiber (NDF) concentrations rise, and total digestible nutrients (TDN) percent declines.

Store bales off the ground to minimize spoilage. “If round bales are stored directly on the ground, we can see 5% to 20% loss in the first nine months, and if you are storing the hay even longer than that, you could see losses of up to 50%,” Freking said. “If you can elevate the bales by putting them on a pallet, for example, the percentage of loss is greatly reduced.”

The extension livestock specialist also encouraged listeners to store hay in a location where water doesn’t puddle, and where bales are fully exposed to the sun. Allow some space between bales so that when it rains, the hay has a chance to completely dry.

For large round bales, most spoilage occurs in the outer layers. According to Freking, the amount of hay cattle will refuse to eat can be predicted. “If you can see a 6-inch outer layer on a 5-foot diameter bale, you’re losing about 35% of the dry matter of that bale, which can add up quickly,” Freking said.

Freking noted there are pros and cons to consider before shifting to a baleage system. Baleage provides the opportunity to harvest in a timely manner, and a barn isn’t necessary for storage. “Baleage can maximize the quality of your hay,” Freking said. “Knowing the quality of the forage can help to increase animal performance and consistency.”

Since baleage is put up at 45% to 60% moisture, the bales are heavier, which could pose a challenge if the bales will be sold. Not everybody is set up to handle the heavy bales. Making baleage also requires more equipment. Additionally, baleage requires a good seal, and if the plastic gets a puncture, there will be some loss of quality. Depending on the area of the country, a bale can spoil quickly once it is exposed to air.

When feeding hay, the feeder design can impact the amount of waste. An Oklahoma State University study found that a basket-type hay feeder has about 5% waste and a sheeted-bottom feeder has around 13% waste. Both conventional open-bottom hay rings and polyethylene pipe rings result in about 20% waste in a 72-hour period. Feeding hay without a feeder results in about 45% waste.

According to Freking, placing electric fence down the middle of an unrolled bale of hay can enhance cattle utilization of hay bales to about 90%. This strategy is similar to strip grazing.

“Running the electric fence down the middle of the unrolled hay keeps cattle from laying in it,” Freking said. “Still, you will want to unroll hay on a daily basis or no more than enough for a couple of days.”

Look to alfalfa as a protein supplement Previous