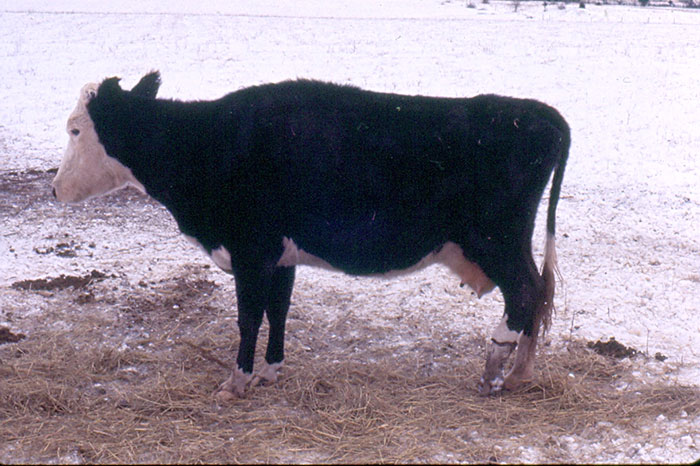 The symptoms of a bad case of fescue toxicity are well-documented. One symptom — fescue foot — can become more apparent when temperatures drop during the winter.

“As the cold weather moves in, you are likely to notice some cows or yearlings on fescue pastures may be slow-moving early in the day,” notes Eldon Cole, a livestock specialist with the University of Missouri Extension. “This might be an early warning sign of fescue foot,” he adds.

Toxic alkaloids in Kentucky 31 tall fescue causes the restriction of blood vessels. Especially susceptible to restricted blood flow the animals’ extremities such as ears, tails, and feet. Calves can lose the tips of their ears or switches from their tails. This lowers their market value.

“For affected cows, producers may notice slight swelling in the rear ankles and possible breaks in the skin from the top of the hoof to up above the dew claw,” Cole notes. “Early detection of limping is key. By the time hooves on hind feet show red, gangrene may have set in.”

If a limping animal is detected, Cole suggests putting it in a chute and checking its lower leg. “If the animal’s leg feels cooler than the rest of the leg, move the affected animals from that toxic pasture and dry lot them or at least put them on a different pasture,” Cole recommends. The colder extremity is the result of a lack of blood flow.

Don’t graze toxic fescue pastures too short. Research shows that toxins stay in the lower 2 inches of the fescue plant during the fall. Intensive rotational grazing with frequent movement of cattle will help ensure plants are not grazed too short.

Cows that develop fescue foot have difficulty walking or grazing, which drastically impacts performance. While there is no cure for the condition, preventative measures such as planting a novel endophyte tall fescue variety can essentially eliminate the problem. Other strategies are also available for mitigating the disease, such as including legumes into a toxic tall fescue pasture.

Don’t let production get stuck in the mud Previous