There’s nothing nice about ice 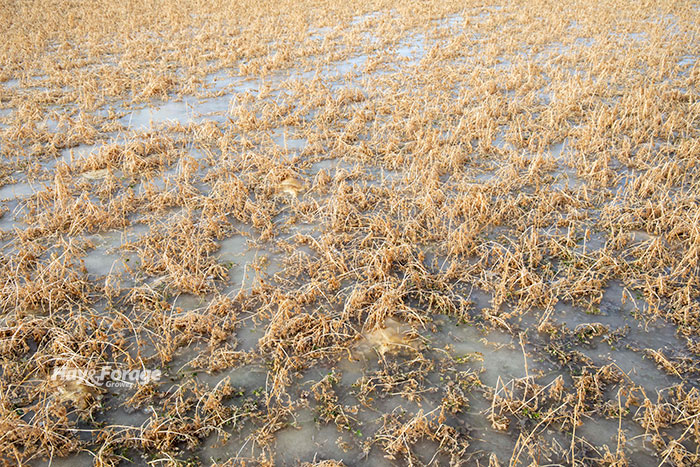 Snow cover on alfalfa has always been considered a desired situation. It insulates the plants and soil to keep temperatures from hitting the high and low extremes of air temperatures during winter and early spring.

In contrast, ice that falls as precipitation or is created from rapidly melting snow followed by extreme cold temperatures has never been considered a positive situation for an alfalfa field.

Recently, air temperature fluctuations have started to widen. Many areas have experienced rapid snow melts followed by days of temperatures below freezing. This has caused some significant icing, especially in low lying areas or fields. The above photo was taken in a southern Wisconsin field last Friday. If not for the abundant fall plant residue, it would be prime real estate for a curling match.

Ice sheeting may cause damage to or kill alfalfa plants in three ways:

The good news is that alfalfa plants have not yet broken dormancy and plant respiration rates are extremely low. Ice sheeting that occurs in early spring would likely be more damaging. How long the ice remains on fields generally determines the likelihood for damage or lack thereof.

Plants that hardened properly in the fall will be less susceptible to cold injury due to ice. Death by suffocation will depend on whether the ice is formed as a solid sheet or not. Ice that is nonuniform, cracked, or has holes will not completely restrict air movement into and out of the soil, which theoretically will result in less damage. Alfalfa stems sticking up through the ice also help to aid in gas exchange.

There is nothing that can be done to eliminate an ice problem. The best bet is to wait and assess damage this spring and make the appropriate decisions at that time. There are plenty of other things to worry about aside from the ones we can’t control.

Ask questions if buying hay from a distance Previous