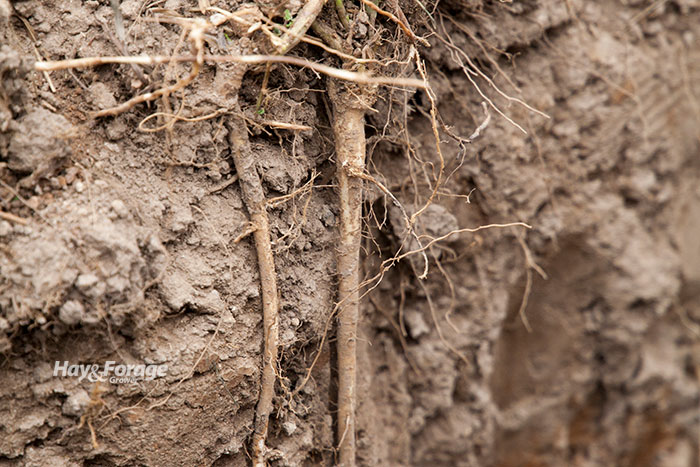 It’s been well-documented that alfalfa yields have not improved at the rates seen in other agronomic crops over the past 50 years. It’s not that alfalfa varieties haven’t gotten better — they have — but realized yields have just been slow to trend higher.

The extensive list of reasons for this lack of yield improvement have been long debated, and I don’t plan to rehash them here other than to say alfalfa is a perennial, so pushing yield gains is a tougher row to hoe compared to annuals.

To keep things positive, genomics and the identification of “yield genes” look to hold promise for measurable alfalfa productivity improvements. Genes that impart stress tolerance will do the same.

Recently, another potential key to yield improvement has been reported by USDA-Agricultural Research Service (ARS) scientists based at the University of Minnesota, and this yield-impacting trait has been right beneath our feet for generations.

Deborah Samac, a USDA-ARS research leader and adjunct professor, says that most of the alfalfa plant is found underground, with roots growing as much as 5 feet per year and reaching up to 30-feet deep.

“Improving root system architecture can have a profound impact on plant productivity,” writes Samac in a recent issue of the Midwest Forage Association’s Forage Focus newsletter. “For example, combined field and simulation analyses concluded that changes in root architecture were a primary driver of the nearly eightfold increase in U.S. corn yields since the 1930s.”

It’s not surprising that root architecture plays a significant role in alfalfa productivity. Roots have the potential to impact nitrogen fixation, nutrient uptake, water-use efficiency, plant heaving from frost, winterhardiness, and pest tolerance. However, Samac notes that we don’t know much about how the genes that control root development impact other plant traits.

Alfalfa root studies are tedious and not common for an obvious reason — they’ve historically required the need for a close relationship with a shovel. Recently, new techniques that generate digital root images have been developed that hasten data collection and result in fewer hand blisters.

Samac and her team followed alfalfa root growth during the establishment year and discovered that more than half of all the fine roots in the upper 10 inches of soil were produced during the first seven weeks of growth. They documented 8.5 miles of roots per square yard of soil, and by the end of the season, nearly half of the uppermost roots had died. “We estimated this amount of root turnover released 740 pounds of carbon and 54 pounds of nitrogen per acre,” Samac writes.

To develop alfalfa germplasms with distinct root characteristics, plants were grown in the field for 20 to 22 weeks and then dug up to determine their individual root traits. These plants were from a parent germplasm — a mix of 1990-era varieties — with known beneficial agronomic traits. The dug plants were separated into high- and low-fibrous plants.

Next, the alfalfa plants were intercrossed to form high-fibrous and low-fibrous populations, and then sorted as being either taprooted or branch-rooted. These populations were then evaluated over two-years (establishment year plus first production year).

The forage yield for plants selected for fibrous and branched roots was 7% to 14% greater in the establishment year and 9% to 16% greater in the first production than the taprooted alfalfa (see graph below). “This suggested that the selection of altered root morphology is a viable strategy for enhancing alfalfa yield,” Samac notes. “The root architecture was also found to be stable in different soil types and with variable phosphorus and potassium levels.” 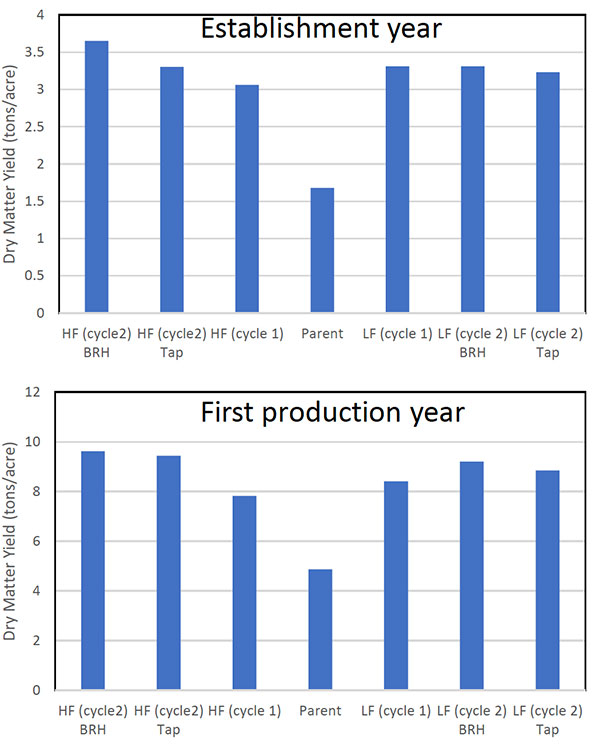 Samac believes there could be several explanations for the higher yields with the branch-rooted plants. The researchers found that these plants had more nodules than those with taproots. This could mean greater nitrogen fixation. It also could be that branch rooting allows the plants access to more soil nutrients.

There are still many questions to answer regarding the architecture of alfalfa roots. Samac says it could be that taprooted plants may hold the advantage in terms of carbohydrate storage for winter survival or be more resilient in drought conditions. Conversely, branch-rooted plants may give plants an advantage in wet soils where gas exchange is important.

A new technique to assess root architecture early in plant development offers the promise of speeding selections and evaluation. Future research should help discern some of the questions that still exist and, hopefully, translate to improved alfalfa yields in production fields.

First-cut alfalfa: try not to blow it Next