Pairing up alfalfa and corn silage 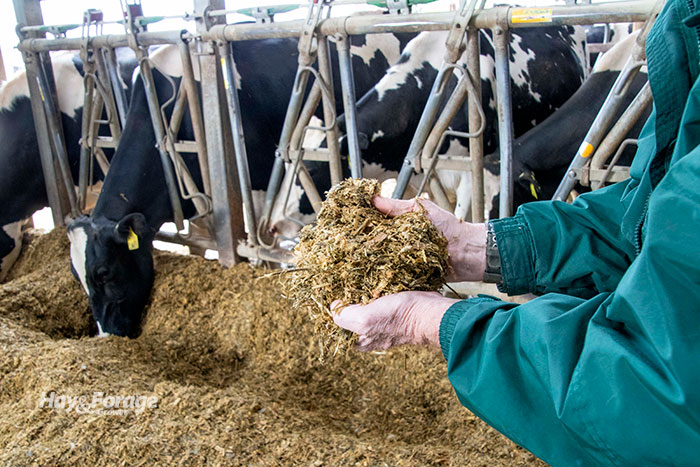 Just as roast beef and mashed potatoes make for a natural combination on dinner plates, corn silage and alfalfa are brought together in most lactating dairy cow rations. What might vary in these rations is the ratio of corn silage to alfalfa fed.

A clear trend during the past 20 years has been toward the growing and feeding of more corn silage relative to alfalfa. In fact, some nutritionists have opted for rations containing from zero to 20% of the dry matter forage fed being alfalfa.

“With economic, environmental, and even social considerations encouraging the use of higher fiber, higher forage diets, we may need to take a fresh look at how we use alfalfa in ration formulations,” notes Rick Grant, a dairy nutrition researcher and president of the Miner Research Institute in Chazy, N.Y. “Alfalfa has unquestionable benefits for soil health, nitrogen fixation, and sustainability of forage systems.”

Grant asserts that corn silage and alfalfa are great complementary forages. Alfalfa’s fiber characteristics, a high crude protein content, and its solubility plus higher lysine content match up well with corn silage’s high fermentable starch content. “The net result of an optimal combination of these two forages ought to be a positive effect on rumen microbial protein synthesis and solids-corrected milk production,” writes Grant in a recent issue of the Miner Research Institute’s Farm Report newsletter.

Grant reports that he and his team recently finished a study designed to identify the optimum corn silage-to-alfalfa ratio in lactating dairy cow diets. They wanted to determine if there is a benefit to feeding more alfalfa.

Chopped alfalfa hay was used instead of haylage to maintain consistent quality during the four-week feeding period. Grant notes that previous research demonstrated that feeding alfalfa hay or silage results in the same milk production responses.

The total mixed rations had a dry matter of 60% or less with some water added to the higher hay diets. The higher hay diets also had smaller particle size given how the alfalfa fragmented when chopped. Although it was intended to have all the diets supply similar levels of metabolizable protein, the highest alfalfa diet supplied about 150 grams more per day compared to the highest corn silage diet.

Regardless of the diet fed, all of the cows averaged about 59 pounds of dry matter intake and 106 pounds of energy-corrected milk.

“Observing this same high production across a wide range of alfalfa-to-corn silage ratios allows us wide latitude in the amount of alfalfa that can be fed relative to corn silage,” Grant surmised.

Looking at milk components, Grant determined that the 30:70 and 50:50 alfalfa-to-corn silage diets resulted in the greatest milk true protein output and slightly higher de novo fatty acid content in the milkfat. The milk urea nitrogen (MUN) content was lowest with the 30:70 diet as well.

“The milk compositional results suggest to us that an optimal proportion of alfalfa-to-corn silage, under our ration formulation conditions, was about 30:70 to around 50:50,” Grant concludes.

Based on the results of this research, the respected dairy nutritionist offers the following take-home messages:

2. This research shows that you can feed up to 90% of forage as alfalfa with corn silage in 62% forage diets.

3. Milk components appear to be optimized between 30:70 and 50:50 alfalfa-to-corn silage ratios.

4. Sustainable dairy-forage programs could include higher alfalfa-to-corn silage ratios than are commonly used in the dairy industry today.

Roots may hold key to better alfalfa yields Next