By Earl Creech and Ryan Larsen 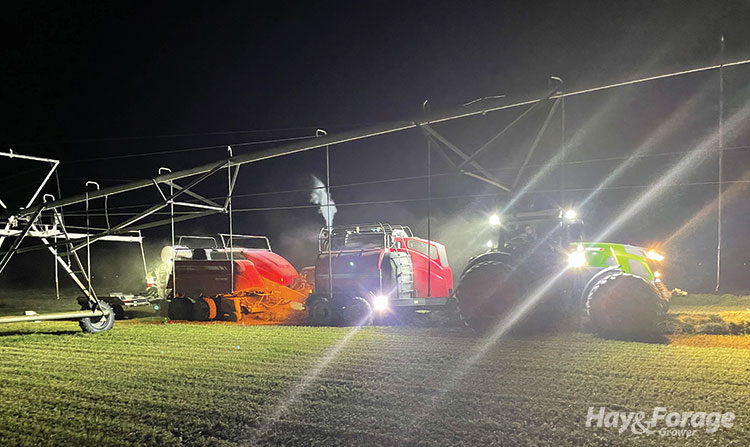 Perhaps no other issue garners more attention from alfalfa growers than the moisture level of the crop in the windrow. Having the correct moisture in alfalfa at the time of baling is critical for maximizing economic return. Alfalfa baled too wet can be subject to spoilage, discoloration, and, in extreme cases, combustion. When baled too dry, shattered leaves, brittle stems, and dust are undesirable. Regardless of whether the hay is to be used to feed livestock on the farm or sold, it is worthless if baled outside of the proper moisture window. 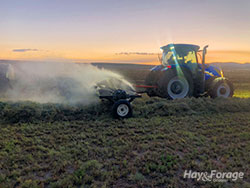 Using the Dew Simulator (pictured) or Dew Point resulted in bales having fewer shattered leaves and stems.
Dew has long been relied on to provide needed moisture to the windrow for reducing leaf and stem shatter during baling. The challenge with natural dew is that it can be unpredictable, both in terms of timing and amount. As a result, producers typically work their baling schedules around Mother Nature and often experience a wide range of windrow moisture levels over the course of a baling event.

To work around the need for dew, attempts have been made over the years to develop systems that artificially introduce moisture to the windrow. Early attempts consisted of a producer loading a sprayer with water and applying it over the top of the windrow. More recently, specialized equipment that injects moisture into the windrow during the baling process has been developed. The claim of manufacturers is that these systems widen the window of time for baling to occur, thus allowing a single baler to cover more acres per day and also produce bales at a consistent moisture level.

There has been much interest in these technologies among hay growers in recent years, but little to no university data on how these systems compare. Over the past two years, Utah State University has studied the impacts of moisturization technologies to determine their effects on yield, quality, and economic return. 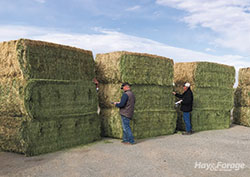 Without knowing treatments, hay brokers assessed the market value of the hay.
Studies were conducted during second and third cuttings in 2020 and second cutting in 2021 on a large, pivot-irrigated farm near Milford, Utah. For the experiment, alfalfa was windrowed and raked according to normal practice on the farm. Treatments included four different remoisturizing methods:

Baling for all three harvests occurred between the hours of 9 p.m. and 1 a.m. with a 3x4 baler operated at 45 to 50 flakes per bale at an average speed of 8 miles per hour. The four treatments were replicated and randomly assigned to windrows within two pivot spans.

Bale moisture and weight: In all cuttings, moisture was higher in treated bales (12.3% moisture on average) than those baled dry (9.2% moisture). Differences in moisture between those windrows that received the moisture treatments were rare and inconsistent. As expected, the weights of moisture-treated bales (1,448 pounds per bale) were generally higher than those baled dry (1,347 pounds). Bales from the steamer were often, but not always, heavier (1,483 pounds) than those produced using the Dew Simulator (1,431 pounds on average).

Yield: When not adjusted for moisture, two of the cuttings in the experiment recorded higher yields from moisture treatments on a per acre basis compared to those baled dry (0.16 ton per acre per cutting, on average), while the third cutting had no effect on yield. No statistical yield differences were detected between the steamer or the Dew Simulator in any of the cuttings.

When adjusted for moisture and expressed on a dry matter basis, only one of the three cuttings had statistical yield differences between treatments. The 2021 cutting resulted in a dry matter yield gain from 1.11 tons per acre baled dry to an average of 1.34 tons per acre with the moisture treatment.

The lack of yield difference in two of the three cuttings was surprising based on the potential dry matter loss due to leaf and stem shatter by baling alfalfa at around 9% moisture. More study is needed to understand why the dry matter yield of alfalfa baled dry was not consistently lower than those baled with moisture.

Quality: Adding moisture did not negatively affect quality. It also did not improve quality. Although numerically, the dry bales trended toward lower quality, having lower crude protein and relative feed value with higher neutral detergent fiber, but the differences were not statistically significant. The fact that the lack of moisture during baling did not adversely impact forage quality is surprising. This suggests that, although shattered and unattached, the leaves in the dry bales were mostly captured during the baling and core sampling process.

Storage in the stack: Bales produced in 2021 were re-evaluated after three months of storage in a stack to determine if differences in bale characteristics would persist. After storage, bale moisture content declined 1.2 to 1.5 percentage units across all treatments, and bale weight dropped by about 30 pounds. Each of the forage quality measures also trended a little worse. Statistically, no new treatment differences emerged after storage.

Moisture-treated bales using different technologies did not differ from each other and were always more appealing to buyers than those baled dry. Bales produced with both the Dew Point and Dew Simulator, having the leaves intact and attached, had a much better appearance than the dry bales with shattered leaves and stems. In terms of market value, the moisture-treated bales were priced at $280 to 285 per ton for the 2021 season, while the dry bales had a value of $270 per ton.

A look at the dollars

Annual ownership cost is estimated by utilizing the capital recovery method. The capital recovery method uses the purchase price, salvage value, useful life, and a discount rate to estimate the annual ownership cost. The discount rate represents the opportunity cost of capital and accounts for owning the piece of equipment over multiple future periods. The operating cost is estimated by utilizing the fuel used per hour, labor cost, and repair costs on an annual basis. Using the information from Table 2, we can analyze the net financial impact assuming 1,000 acres of alfalfa, a fuel price of $2.50 per gallon, and an alfalfa price of $200 per ton.

These numbers are based on one certain scenario, so caution must be used when drawing specific conclusions from them. The steamer has a higher ownership cost, which drives the cost per acre up. The financial benefits of utilizing the steamer improve as the number of acres increases.

Conversely, the same can be said for utilizing the Dew Simulator. The lower ownership costs of the Dew Simulator make it more economical with fewer acres compared to the steamer. These results also assume that both steam technologies are utilized over 100% of the acres. Lowering the usage will impact the results for both technologies. A producer should utilize the partial budgeting methodology to analyze the results for their specific operation.