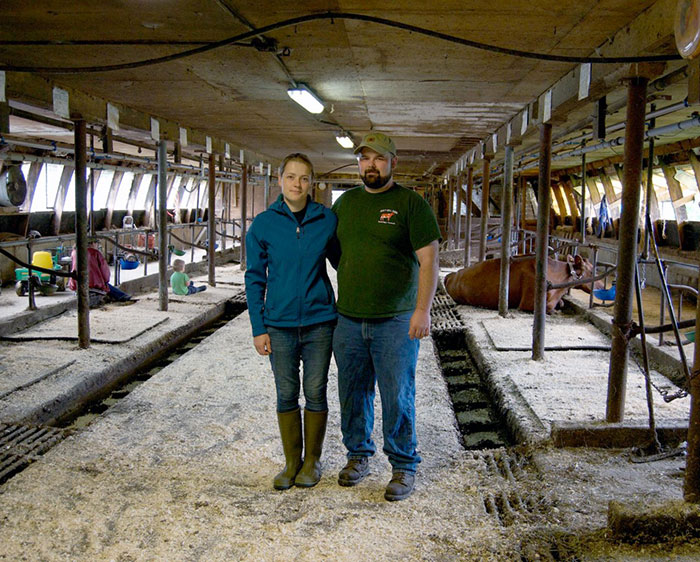 Photo: Emma Cotton/VTDigger
Scott and Amber Hoyt operate an organic dairy farm in Vermont. Their recent experience provides a warning for others.

In reading the January 25 issue of Hoard’s Dairyman, one of our sister publications, I was struck by an article written by Charles E. Gardner, a veterinarian and farm business management specialist from Pennsylvania.

Gardner recounts the story of a Vermont organic dairy farm operated by Scott and Amber Hoyt. Their experience and its devastating outcome could have occurred on any type of farm that grazes or harvests forage.

The nightmare began innocently enough during the fall of 2019 when a telecommunications company used thin stainless steel lashing wire to attach a fiber optic cable to existing lines that ran across some of the Hoyts’ land. In the process, small pieces of the cut wire fell onto the farm’s hayfields and pastures.

Needless to say, stainless steel is not magnetic, and the small pieces of wire weren’t subject to a warning signal by the harvesting equipment’s metal detector or retained on the magnet. As a result, a significant amount of wire was chopped into the forage. Because the forage wasn’t fed immediately, the problem went undetected for nearly a year.

The impact of the contaminated forage was brutally felt when the first cow died, and a necropsy revealed that hardware disease was the cause. Soon after, two more cows died while others had to be sold. Observed symptoms in the herd included sudden bloody noses, signs of discomfort, a high number of aborted calves, and declining milk production.

The wire-laden forage had to be discarded and new organic feed purchased. However, the fields remain contaminated and likely will be that way for years to come.

The Hoyts’ nightmare continued when they contacted the telecommunications company. They were told that the work was done by a subcontractor for another subcontractor and that the former was now bankrupt and out of business. A small amount of compensation was received to purchase some additional organic hay, but it came nowhere close to meeting the incurred losses. A lawsuit is now pending that seeks damages for negligence, nuisance, trespassing, consumer fraud, and punitive damages.

This story is complicated by the fact that the telecommunications company was a public utility and “officially” didn’t need permission to do the work. There were no contracts with individual landowners.

Although this incident involved a public utility, Gardner offered some advice in his article that he got from an attorney familiar with dairy farm issues. For any contracted work on a farm, the attorney recommended the following:

1. Have a written contract that includes wording that you will be compensated for any harm done to your property, animals, or equipment.

2. Make sure the contract also covers the company’s contractors, subcontractors, agents, and employees.

3. Ask for and review proof of insurance coverage that includes all contractors, subcontractors, agents, and employees.

4. Have your attorney review the contract before you sign it.

In the Hoyts’ case, the work was being done to provide broadband for their rural area. This type of work will become more frequent in the years ahead. Let’s hope such a nightmare isn’t repeated.

A hidden nitrogen gold mine Next