The author is an extension forage specialist with West Virginia University. 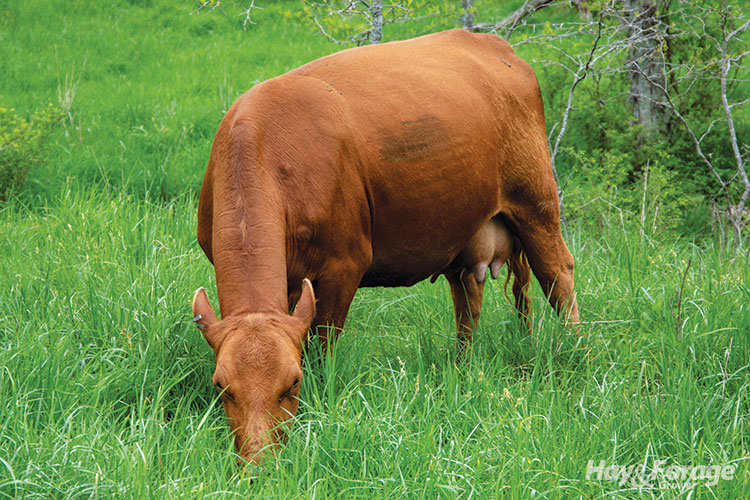 Pastures are often the least-cost option for ruminant livestock production. In much of the Northeast, pasture and aftermath-grazed hay meadows are the largest portion of the agricultural acreage. University research provides guidelines on how to best manage pastures. However, how well livestock on farms utilize pasture is not often measured. The following is a summary of on-farm pasture research that provides a view of how well pastures are utilized when livestock graze in rotationally stocked pastures.

Rotationally stocked pastures on farms in West Virginia and southwestern New York were sampled before and after grazing. Each of the seven farms had four to eight paddocks, which were sampled two or three times between May and November and over two to three years. Farm locations ranged from 39 to 42 degrees North latitude, at elevations from 1,000 to 2,600 feet above sea level.

Depending on the farm, pastures were grazed by beef cow-calf pairs, yearling steers or heifers, or lactating dairy cattle. Grasses in the pastures varied across farms and included orchardgrass, tall fescue, timothy, smooth bromegrass, bluegrass, bentgrass, and quackgrass. The legumes in the pastures included white clover, red clover, birdsfoot trefoil, and alfalfa.

Each data point on the graphs represents a pasture sampled during one grazing event. A total of 80 grazing events provided data on utilization of the initial forage mass and 66 grazing events provided data on the utilization of forage nutritional components. The variability in sampling pastures is high due to plant species diversity and livestock management. Because of this, 5% of the pastures were extremely far from the regression average (greater than 2 standard deviations) and were considered outliers and removed.

The forage amount removed by grazing cattle was directly related to initial forage mass (Figure 1). Above a base forage mass of 700 pounds of DM per acre, 54% of the forage was removed by the grazing livestock. This is in line with the old saying of “take half and leave half.” The 700 pounds of DM per acre is significant in that it represents a residual height of 2 inches in an average pasture. This residual forage is tough, resistant to grazing, and also contains much of the carbohydrate reserves in grasses such as orchardgrass. 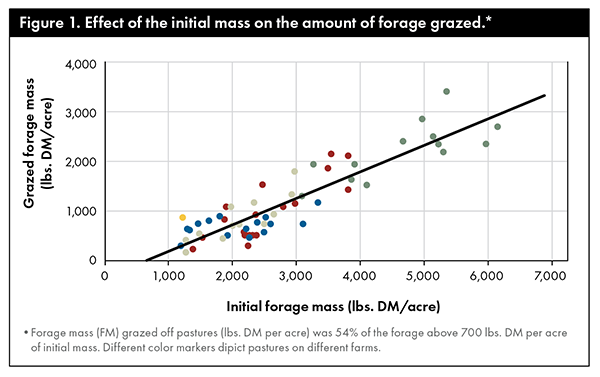 After accounting for the initial forage mass, grazed forage did not differ between farms. Two thirds of the samples ranged within 311 pounds DM per acre of the grazed forage trendline (Figure 1). In these on-farm projects, we had defined pregrazing and postgrazing heights. However, due to the relationship between livestock, forage, and human managers, there was a consistent pattern in grazed forage across pastures differing in plant species.

The apparent intake of CP, NDF, and TDN in the forage mass grazed off the pastures increased as these nutritive components elevated in the initial forage mass (Figures 2B, 3B, and 4B, respectively). These relationships accounted for 73% to 80% of the variability in apparent intake.

When summer regrowth intervals exceed six weeks, forage quality drops as leaves age and die. After accounting for initial forage mass and its quality, utilization of the forage and apparent intake of CP, NDF, and TDN was uniform across farms and the forage species being utilized.

A forage nightmare hits this Vermont farm Next