The author is a soil scientist with the USDA Agricultural Research Service in Raleigh, N.C.

Water flows downward according to gravity. If there is a hole in the bottom of a bucket, water drains out due to the pull of gravity. Without soil, a forage plant could potentially grow in a bucket with a small amount of water — but only if the bucket didn’t have a hole in it. If there were a hole, then water would have to be streaming into the bucket nearly continuously for the forage plant to grow.

Soil effectively has an open-ended bottom, so containing water could be considered difficult. And yet, soil holds water for forages to thrive because of small pores, often called capillaries. These small pores provide a mechanism to store this water against the pull of gravity so that forages can grow on all those days between rain events.

Soil pores, or capillaries, retain water against the pull of gravity but not against the strong suction of water demanded by growing forages. Forages, like all plants, emit water vapor to the atmosphere from leaf stomata via the process of transpiration, a process enabling these forages to fix carbon dioxide in the atmosphere into sugars for growth. A continual supply of water is needed by forages to perform the process of photosynthesis. The water holding capacity of soil provides forages with the necessary water for growth, even between relatively long dry spells. 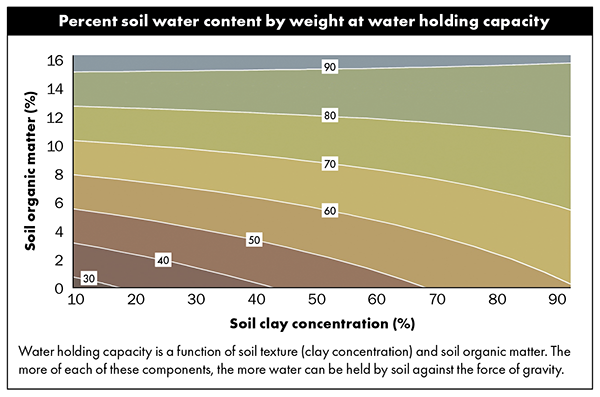 Not all soils have the same water holding capacity. Key factors affecting water holding capacity are soil texture, soil organic matter, and soil structure. Soils with a fine texture, that is, with greater proportion of clay- and silt-sized particles, will have greater water holding capacity than soils with coarse texture, or those with greater proportion of sand-sized particles. Soil with finer texture leads to smaller pores that can hold more water against gravity. A diversity of soil pore sizes allows forage roots to get their share of water stored in soil, while stronger capillary forces of micropores keep some of the water in soil and unavailable for root uptake.

Soil with a finer texture is also susceptible to compaction forces that can deform soil into clods and seal pores from access by roots. Soil organic matter can stabilize aggregates of fine particles against compaction forces. Soil structure is a term defined by the extent of soil aggregation and volume and arrangement of soil pores. Fine-textured soils have greater capacity to aggregate and form more structured soil with a diversity of pore size openings. Large pores embedded within the soil matrix can be important for temporary storage of water, but eventually capillary forces redistribute water more evenly throughout the soil matrix.

Land owners inherit the textural features of soil, so management of the soil should conform to these features that may create opportunities or barriers for various land activities. However, the organic matter concentration of soil can be managed. Vigorously growing forages are key to raising soil organic matter. Maintaining residual forage mass, keeping soil covered with plant residues, and stimulating forage growth with good grazing strategies promote soil organic matter accumulation. External nutrient inputs may be needed, but keep in mind that pastures can cycle nutrients effectively. Test soil for deficiencies and excesses as needed.

Improving water holding capacity with soil organic matter management will be in your best interest to maintain forage production during extended dry periods. Getting to know the health of your soil can lead to changes in how much water soil can store before it drains past the rooting zone.

For more detailed information on how soil texture and organic matter influence soil water at different levels of saturation, refer to bit.ly/HFG-SoilWater.

This article appeared in the January 2023 issue of Hay & Forage Grower on page 20.