Though there is no scientific survey that documents the rising popularity of baled silage, an excursion down rural roads tells us that more and more forage is being harvested in this manner. Baled silage, or baleage as it’s often called, offers the opportunity to harvest high-moisture feed at a lower cost compared to conventional silage.

“Expensive toys (equipment) are not always the answer to good baled silage,” said Wayne Coblentz, a U.S. Dairy Forage Research Center scientist based in Marshfield, Wis. “The key is to start with high-quality forage. There’s a cost that can’t be recaptured if a hay crop is too mature.” Coblentz spoke as a part of World Dairy Expo’s forage seminar series last October in Madison, Wis.

Many livestock producers are shifting at least some of their dry hay production to baleage in an effort to capture a higher quality feed. According to Coblentz, baleage is an attractive alternative because the higher moisture feed allows for reduced leaf loss in legumes; there is less wilting time required, reducing the risk for rain damage; little or no spontaneous heating takes place within the bale; and there is no weathering loss after harvest if bales are stored outside.

Like conventionally chopped silage, a good fermentation is important to making high-quality, baled silage. “The first key to a good fermentation is to eliminate oxygen. This does two things: it encourages the growth of desirable lactic acid-producing bacteria and prevents further decay, losses in dry matter, energy, and possibly the production of toxic compounds,” explained Coblentz. “Ideally, the goal is to establish a stable silage mass by lowering pH and maintaining anaerobic conditions.”

Not all forage plants are created equal in terms of the amount of water-soluble carbohydrates (WSC) within the plant and their buffering capacity. Water-soluble carbohydrates (sugars) serve as the substrate for lactic acid-producing bacteria that drive down the silage pH for long-term preservation. Forage species vary in the amount of WSC they contain. Corn silage and sorghum species may be 10 to 20 percent WSC as a percent of dry matter. In contrast, cereal forage is 8 to 12 percent, alfalfa is 4 to 7 percent, and bermudagrass is typically 2 to 4 percent. 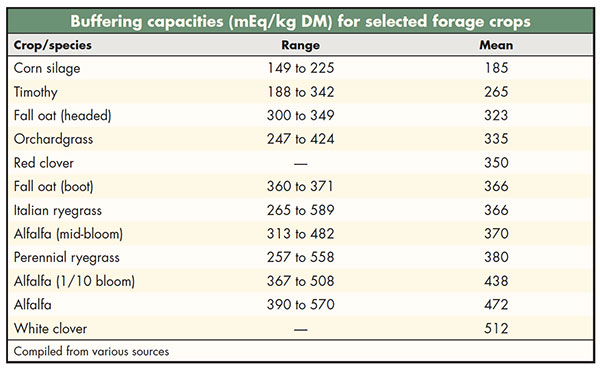 “It’s really important to wrap as soon after baling as possible,” said Coblentz. While showing some of his research with alfalfa, Coblentz noted, “If the bale is allowed to heat before it gets wrapped, the buffering capacity of the forage significantly rises and this reduces your chances of a good fermentation. Strive to get bales wrapped as quickly as possible. A commonly mentioned target is within two hours of baling, but this may not always be feasible from a practical management standpoint. Research has indicated that damage is usually pretty minimal within the first eight to 12 hours.”

Coblentz also cautions growers that there are problems when moisture is either too low or too high. He cites his own research where lactic acid production was near zero at moisture levels below 42 percent. Conversely, the potential for a clostridial fermentation accelerates at high moisture concentrations. The undesirable by-products of this type of fermentation are elevated levels of butyric acid and ammonia. High-protein legumes like alfalfa are especially susceptible to clostridial fermentation when moisture levels exceed 60 percent.

According to Coblentz, the basic management principles of making baleage compared to chopped silage are similar, but there are two characteristics beyond moisture that make an optimum fermentation for baled silage more difficult. The first is the lack of chopping action, which forces sugars to diffuse from inside the plant to reach lactic acid-producing bacteria located on the outside of the forage. Furthermore, baled silage is often less dense than chopped silage. This may also restrict the availability of sugars to lactic acid bacteria. The result of these factors is that baled silage fermentations generally produce less lactic acid and have a higher pH.

Air is the enemy of baled silage; whatever is done correctly prior to and during harvest can be easily erased if air enters the bale after it’s dropped from the baler. Coblentz noted that the evils of air are well documented in research. When air is present, ongoing plant respiration converts plant sugars to carbon dioxide and water, while releasing heat; this reduces the pool of fermentable sugars, results in excessive dry matter loss, indirectly increases fiber levels, and decreases the energy density of the feed.

“Strive for a bale density of 10 pounds of dry matter per square foot or more,” suggested Coblentz. “To hit this mark, you may have to reduce ground speed and increase PTO speed,” he added. Bale density is also impacted by windrow size (smaller will increase revolutions per bale) and forage moisture (strive for about 50 percent).

“Research is clear that at least four layers, at minimum, of 1 mil stretched plastic are needed to seal the bale,” said Coblentz. He added that six layers are more appropriate for long-term storage and in Southern states. “Use UV-resistant plastic and patch any holes with an approved type of tape. Duct tape doesn’t fall into that category,” Coblentz noted.

Once properly sealed, locate an appropriate storage site where the integrity of the plastic can be maintained. Isolate bales from cattle and place them in an area that won’t invite nearby wildlife. Keep weed and grass growth under control around the storage area. Once wrapped and stored, inspect the bale plastic from time to time for holes.

For in-line wrapped bales, Coblentz emphasized the need for bale uniformity to eliminate air pockets along the row of bales.

Generally speaking, bacterial inoculants are used inconsistently during baled silage production, but Coblentz recommends the practice in specific situations where alfalfa is at risk for a clostridial fermentation. The first situation occurs when forage is borderline too wet (approaching or greater than 60 percent moisture). In this case, lactic acid producing bacteria will help to drive the pH down and reduce the risk for clostridial fermentation. A second situation when inoculants might be considered is when dairy slurry was applied after the previous cutting of alfalfa. Coblentz pointed to research he had done that suggested there were elevated levels of clostridial bacteria on the forage following a post-harvest liquid manure application on the previous cutting.

A final situation where inoculants are recommended is when the forage is rain damaged. Here, there are fewer WSC to act as substrate and bacterial inoculants will help support fermentation and lower the final silage pH.•