The downside of seeding alfalfa too early 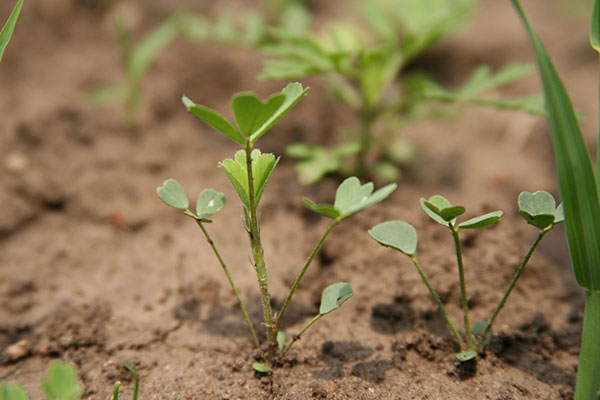 The recent run of warm temperatures may have some people in the mood to grease up the drill and get an early start on seeding alfalfa.

“For most situations, the risks of planting early outweigh any benefits,” says Bruce Anderson, extension forage specialist at the University of Nebraska.

In a recent edition of the University of Nebraska’s CropWatch newsletter, Anderson explains that ultra-early alfalfa planting is a roll of the dice. A return to normal temperatures will slow seed germination and emergence, leaving the potential stand subject to seedling diseases and setting the stage for a total or partial replant situation.

Freezing is another potential factor. “Very young alfalfa seedlings can tolerate temperatures maybe as low as 20°F. Thus, freezing usually isn’t a problem early on,” explains Anderson. “The danger of freezing actually is greater after alfalfa reaches the third or fourth trifoliate leaf stage, or about 4 inches tall. At this stage, alfalfa loses its cold tolerance and becomes more susceptible to freezing. Waiting to plant until April minimizes this risk.”

Though an early-seeded alfalfa stand has the potential for slightly greater yields in the seeding year, it comes with the risk of losing the entire stand. “Losses may mount to several hundred dollars per acre when you consider the cost of reseeding and the value of lost production,” says Anderson. “The low-risk play is to stick with recommended seeding dates.”

It might be time for a pasture makeover Next