Not your average cows or forage Once you talk and listen to Tom Kestell, it won’t be something you’ll soon forget. His years of feeding a herd of dairy cows that now annually averages over 45,000 pounds of milk per cow have armed him with a large arsenal of experiences and knowledge that he readily shares.Kestell farms with his wife, Gin, and his son and daughter-in-law, Chris and Jennifer; they operate a family dairy in Waldo, Wis. The farm isn’t one of large freestall barns and bunker silos, but rather consists of an updated tie stall barn and six tower silos. It is what’s inside that barn and silos — 85 outstanding cows and great forage — that distinguish Kestell’s Ever-Green-View Farms from the rest of the pack.Kestell, along with his nutritionist of 30 years, Steve Woodford, talked to an overflow crowd of people from the Forage Seminar Stage at World Dairy Expo in Madison, Wis.Consistency is keyThough many components are responsible for achieving a nearly 46,000-pound herd average, Kestell puts cow genetics and consistently high-quality forage at the top of the list. “High quality doesn’t mean rocket fuel,” Kestell said. “We like our alfalfa in the 160 to 190 relative forage quality (RFQ) range. The key is to give cows a consistent forage ration. We even chop all of our forages, both alfalfa and corn silage, at about the same length so that the cows can’t sort anything,” he added.“Anytime you insult the cow’s digestive tract, you insult the production,” said the owner of the highest producing dairy herd in the nation. “Moldy or other low-quality feed, whether it comes off the top of a bunker silo or from any other source, is going to hurt you every time, and it’s really hard to make up that production.”Kestell has six upright silos; this is largely because it gives him the ability to segregate forages by quality and feed it to the appropriate livestock group. “If we get hay rained on or it gets too mature, we aren’t locked into feeding it to the milking herd,” Kestell said.The strait-shooting dairyman is also vigilant about knowing the quality of his forage.“I think that as an industry we don’t do a good enough job sampling our forages,” Kestell noted. “I like to load one forage component into the mixer, run it for a few minutes, then take my sample from that.”Kestell’s cows get a 60 to 70 percent forage ration that consists of high-chop corn silage, alfalfa haylage, and about 4 pounds (as fed) of alfalfa baleage that is used to topdress the total mixed ration (TMR), which is fed in the barn. Kestell equated putting baleage on top of the TMR to putting sprinkles on your ice cream. “The cows just love it,” he explained. “But 8 pounds would be too much.”The Wisconsin dairyman likes to grow pure alfalfa that is chopped and put in a silo or in-line wrapped as baleage. He also has some pure grass fields that he harvests and feeds to dry cows and calves.“There’s nothing special about the feed ration other than the forage is consistently high quality,” said Woodford, the long-time nutritionist. “The ration is about 16 percent protein, 27 to 29 percent neutral detergent fiber (NDF), and 5 percent fat.”High-chop cornIn recent years, Kestell has gravitated toward 100 percent brown midrib (BMR) corn that is chopped at a 34-inch height. The resulting corn silage averages 31 to 35 percent NDF, 40 to 41 percent starch, 64 to 70 percent NDF digestibility (30 hours), and over 40 percent starch.“When we went to high-chop corn silage, the cows gained about 4 pounds of dry matter intake (DMI) and about 10 pounds of milk per cow per day,” Woodford said. “Because the corn silage is so high in starch, we only feed about 8 to 10 pounds (dry matter) of high-moisture corn per cow.”Kestell harvests all of his cornstalks, which are round-baled and in-line wrapped. During the following spring, these stalks are then processed and deposited on top of alfalfa windrows before chopping. It is this feed that is used for heifers. “It’s more work, but it brings the protein level down from 22 to 17 percent,” Kestell explained.Defying the average

Woodford readily admitted that he has learned a lot from working with Kestell’s cows during the past 30 years than Kestell has learned from him. 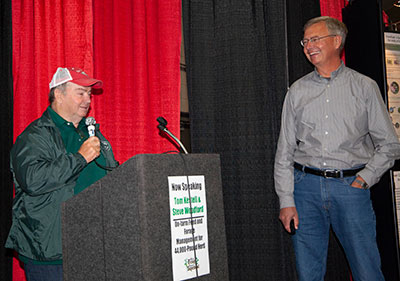 Tom Kestell (left) and Steve Woodford (right) have a laugh while talking about feeding Kestell's high-producing herd during World Dairy Expo.
“I don’t think it’s possible to have forages that are too good — too low in fiber or too high in digestible fiber,” Woodford said. “The goal is to maximize rumen fermentation, and it’s much easier to add energy than replace low NDF digestibility.”“These cows are consuming nearly 70 pounds of dry matter per day,” Woodford said. “That puts them well off of the average curve that most feed ration models are built from. If I follow the feed ration models for Tom’s cows, then I’ll be wrong. Tom’s cows are far better at digesting forage and utilizing starch than the average cow,” he added.Woodford feels that by Kestell selecting for high genetic merit cows over the years, he is by default also selecting for higher biological efficiency when it comes to digesting feed. “It can’t be explained any other way, otherwise we wouldn’t be getting the volume and quality of milk out of the amount of feed they’re currently eating,” he opined.Based on some recent University of Wisconsin research, Woodford explained that each cow seems to have its own unique rumen microbial population, some of which are better than others. “I think that helps to explain what we’re dealing with here,” he said. “These cows, in addition to having good genetics, are far better than most at digesting feed and turning into milk.”“Tom’s herd average has been going up about 1,200 pounds per year, so in five years he should be at 50,000 pounds,” Woodford said.He then concluded by asking, “What kind of forages will we need to support that kind of milk production? Somehow, we will need to improve ration quality to keep pace with livestock genetics.”

Grazing the Blue Ridge Next