They managed through the drought

While many U.S. regions suffered from torrential rain this past summer, much of Missouri was a giant cloud of dust. Keith Baxter, Rogersville, Mo., rolls up some hay that proved beneficial as a partial solution to the drought conditions.
Upon seeing the first armadillo of the day, I realized my internship had taken me beyond the boundaries of the Upper Midwest.

I was following a flatbed truck down an oil-paved road that was as hot as it was black; it was leading me to my destination, a hayfield. I couldn’t help but notice the sign that stated, “Road closed when water levels are high.” How ironic for this area in southern Missouri that was crying for such a “road closed” condition.

This past growing season was less than ideal for many producers in southern regions; Missouri was hit especially hard. Limited rainfall put a damper on forage production, which left many producers scrambling to find ways to feed cattle. Even more troubling than the need for forage was the question of what would be available for stored forages to use as feed through the nongrazing season.

One producer facing this crisis and the difficult decisions that come with it was seventh-generation farmer Keith Baxter of Rogersville, Mo. Baxter and his uncle, Kevin, run K&K Cattle Farms, which is based out of Rogersville but operates in several southern Missouri counties. It was Baxter that I met in the hayfield. He was rolling up hay that was as dry as the soil it grew in.

Drought conditions had taken a major toll on pasture forages. When I was there in late June, Baxter noted that some producers he knew were starting to supplement hay for their cows on pasture. But of course, finding hay to feed wasn’t that easy. “You’d be hard pressed to find someone with leftover hay,” Baxter said under the shade of his straw cowboy hat.

In March of 1849, Baxter’s family homesteaded the farm near Rogersville. Throughout the years, beef cattle have been present on the operation off and on. Dairy had been the major livestock species up until a decade ago when Baxter and his uncle started to grow the beef herd.

Prior to 2005, Baxter and Kevin ran separate operations and traded labor and machinery to help get work done. In 2005, they came together and made a partnership to form K&K Cattle Farms. Baxter’s cousin, Ben, and nine-year-old nephew, Lucas, help out in the summer. His father, Lane, is semiretired but still helps out in the shop to keep machinery running.

K&K Cattle Farms consists of a herd of 250 crossbred beef cows, 37 Holstein dairy cows, 600 acres of pasture, and around 1,200 acres of farmland that is used to grow hay, corn, and soybeans.

The beef cows are kept on pasture near Rogersville. Two-thirds of the herd calves in the spring, while the rest calve in the fall. About 240 calves are born each year. 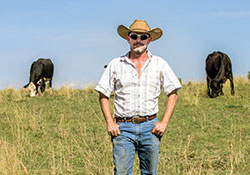 Keith Baxter is a seventh-generation cattleman who farms with his uncle and pastures 250 crossbred beef cows
While others have been “running scared for hay,” Baxter said that they had been lucky. “We’ve been fertilizing hay late in the spring; part on accident and part on purpose,” Baxter specified. “We fertilize later than we used to mainly because we believe nitrogen is not as stable as it used to be. We want the grass to be actively growing and be ready to use it when we apply it,” Baxter added.

“The cold spring was a big challenge for us this year. Grass just didn’t grow; we had to feed stored hay until May,” Baxter stated. But this cold spring played a key role in K&K Cattle Farms’ luck. “Not fertilizing until late April paid dividends this year because we didn’t lose our nitrogen like others did,” Baxter said. He also noted that the growing season for a majority of their grasses didn’t last long before conditions became hot and dry. “Having the nitrogen there when the grass could use it was a plus,” Baxter surmised.

Hayfields at K&K Cattle Farms are typically fertilized with nitrogen once temperatures are high enough to promote grass growth; potassium is also applied to accommodate for the removal of biomass. Herbicide is applied as needed to keep weeds at bay.

In addition to the 200 acres they custom harvest each year, Baxter and his uncle harvest 800 acres of hay that is harvested on shares with other landowners. Baxter identified the biggest two challenges for harvesting hay under a crop-share agreement is time and steel.

“We have to cover more acres to get the amount of hay we need for our herd,” explained Baxter. Not only do more acres take more time, it also leads to more wear and tear on their equipment, which means more maintenance and possibly early replacement. The advantage of a crop-share lease is that the land doesn’t have to be owned or rented.

The nephew-uncle team grow and make hay from tall fescue, orchardgrass, alfalfa, wheat, and foxtail millet. Each year, they produce 4,000 to 5,000 bales, including those that go to their share partners. During an average year, Baxter feeds 1,200 to 1,500 bales to his beef herd through the nongrazing season.

“We will sell extra hay if we have it, but we won’t sell any until the end of January when we get a feel for the winter we are going to have,” Baxter specified. “When we do sell, we mostly sell to neighbors who are coming up a bit short and need a few more bales to get them to spring,” he added.

K&K Cattle Farms includes around 600 acres of Kentucky 31 tall fescue pasture with 500 of those acres used for grazing beef cattle. The remaining acres are grazed by the Holstein cows on Kevin’s dairy. Typically, the grazing season runs from mid-April until the end of November.

None of Baxter’s pastures are irrigated due to the rocky composition of the soil. “It’s great for drainage, but not so great for holding water,” noted Baxter in his usual “to the point” manner of speaking. Despite the dry and hot conditions of 2018, Baxter didn’t experience any problems with fescue toxicity. He attributes this to his aggressive mineral program. “I’ve used the same mineral program from Cargill for years, and it does a good job,” Baxter stated.

Similar to what is done with the hayfields, pastures are fertilized once temperatures are favorable for plant growth. Weeds are controlled through a combination of mowing and herbicide application.

Aside from pasture forages, cattle are supplemented with 2 pounds of corn per head per day for energy. Baxter grows 60 to 80 acres of conventional corn to meet the herd’s needs. Corn is fertilized in accordance to soil test with two-thirds of the needed nitrogen applied at planting and the remaining applied side-dress when the corn reaches about 2 feet tall.

A unique aspect of this operation is how they make their own feed on-site and hand feed their herd with the corn instead of letting them only graze grass or eat hay. Baxter believes this practice reaps several benefits. “We feel it allows us to get a little more life out of a cow, and helps with temperament,” Baxter explained. “We find at weaning time it seems like the calves take to feed a little faster as well.” He also noted that in dry and lean forage years, much like the one of this past summer, they are able to feed lower quality forages without sacrificing body condition.

Baxter could easily be consumed with his 250 head of beef cattle, 600 acres of pasture, 1,200 acres of cropland, and 200 acres of custom cropping, but he’s also actively involved in the Missouri Cattlemen’s Association.

Baxter currently serves as the chairman of the Missouri Cow/Calf Council where he represents the interests of cow-calf producers on the Missouri Cattlemen’s Association executive committee. He is also one of the Missouri board members for the Federation of State Beef Councils. On a more local level, Baxter sits on his county farm bureau board.

Droughts are never easy, but K&K Cattle Farms has some built-in safeguards and will accept luck anytime they can. Baxter figures you can’t win a battle that you don’t plan for.

On my return trip from the hayfield, the armadillos were still cruising the landscape, and I was warned once again of “high water.” Unfortunately, only the dust was deeper.

This article appeared in the November 2018 issue of Grower on pages 26 and 27.

They think out of the box Next