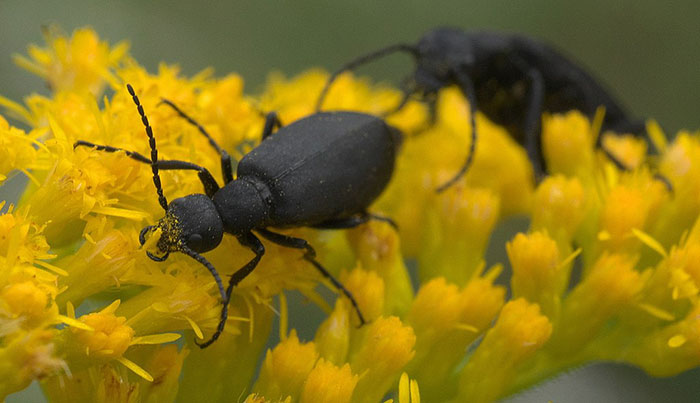 There are lots of things in life that rarely occur. The Chicago Cubs, for example, take home a World Series title about once per century. The Kansas City Chiefs are participating in the upcoming Super Bowl for the first time in 50 years.

In the forage world, we spend much more time writing and talking about prussic acid poisoning from sorghum species than dealing with cattle that actually are afflicted with this malady. In over 30 years, I’ve never come across anyone who has had or knows of animals that died from prussic acid poisoning. My point: It’s rare.

During recent weeks, a Wisconsin horse ranch reported losing 15 horses to blister beetle-infested hay that they had purchased from a Western hay producer. The potential for lethal consequences that blister beetles pose to horses and other livestock has been widely known and chronicled for many years. Actual occurrences are rare, but that provides little solace to the Wisconsin horse ranch owner who just suffered a catastrophic loss.

In matters of the blister beetle, there are considerations from both the buyers and sellers standpoint. First, both groups need to know how to identify the insect.

Blister beetles harbor a defensive chemical substance called cantharidin. If the beetle is crushed and contact with the skin occurs, a blister forms. Similarly, if livestock consume the beetles while eating alfalfa hay, the same effect occurs on the lining of the stomach, intestine, and urinary tract.

The striped blister beetle has 10 times more cantharidin than the ash gray and black beetles. The striped beetles, which are more common in southern regions, also exhibit a swarming behavior; this can result in high numbers within a small field area.

Although blister beetles can be found in virtually all hay-producing states, University of Minnesota extension specialists note that they are most common in arid Southern and Plains states and where grasshoppers are commonplace because the beetles feed on grasshopper eggs. The beetles are attracted to alfalfa blossoms.

Krishona Martinson, extension equine specialist with the University of Minnesota, recommends that horse owners learn as much as possible about the production details of any alfalfa hay that they buy. This includes who produced it, where it was produced, and what was the cutting and maturity of the hay at harvest.

“If details aren’t available, owners should pay close attention to alfalfa hay that was mature or flowering when harvested,” Martinson says. “Unfortunately, detecting blister beetles in hay is practically impossible because the beetles tend to swarm. This means that only a few bales, or even just parts of bales from an entire field may be infested. When feeding small square bales, an observant owner may find some dead, crushed beetles and discard that bale; however, beetles are very difficult to spot,” she adds.

Horses that ingest blister beetles may develop symptoms that include sores or blisters on the tongue and in the mouth, colic, straining, increased temperature, depression, rapid heart and respiratory rates, dehydration, sweating, diarrhea, bloody feces, and frequent urination.

According to Martinson, there is no specific antidote beyond supportive care, which includes mineral oil, intravenous fluid therapy, activated charcoal, and analgesics.

No hay producer purposely bales up blister beetles. An awareness of conditions that favor blister beetles will help to minimize the risk of contaminated hay. These include:

• Early cuttings are less likely to have blister beetles than mid-summer cuttings.

• Hay that is simultaneously cut and conditioned (crimped) is more likely to have dead beetles that remain in the windrow. Because conditioning is a beneficial and recommended practice for enhanced dry down, it’s not often practical to eliminate this step.

• Alfalfa that is flowering is at higher risk for blister beetle infestations. Watch for beetle swarms.

• It is not recommended to specifically spray for blister beetles. Cantharidin remains within the dead beetles

The recent death of the Wisconsin horses from blister beetle-infested hay is a grim reminder of the lethal nature of this insect to livestock and horses in particular. That said, instances such as this have been rare in the past and will no doubt continue to be so. There is still no reason not to buy Western hay as long as due diligence and awareness from both the buyer and seller remain in play.