He zigs when others zag

The view in my rearview mirror mimicked the Dust Bowl as the tires kicked up loose dirt on one of Iowa’s signature gravel roads. It was a good haymaking day. As much as the state is known for its grid of gravel roads that more or less transform Iowa into a large checkerboard, the Hawkeye State is also the epicenter of corn and soybean country.

Like those who farm around him, Dennis Lundy grows some corn and soybeans near Fontanelle, Iowa, but he admits to not necessarily enjoying those crop enterprises. Unlike his neighbors, Lundy is also a big-time haymaker in this mecca of grain combines.

His story has always been one of taking the road less traveled, gravel or not. Growing up on a diverse crop and livestock farm, Lundy was one of the unlucky ones who wanted to farm but found himself graduating from college in 1984. Those were dark days for agriculture. “Most of my classmates either chose or were told not to come back to the farm,” Lundy remembered.

Undeterred, Lundy bucked the trend and returned to the home farm to work with his father. He rented 50 acres from a neighbor and used his dad’s equipment to plant and harvest a crop. “I lost money; 1984 was a dry year,” he said.

In 1985, Lundy’s neighbor quit farming and rented him all of his land. “I got a $25,000 Farmers Home Administration (FHA) loan and bought a combine, two heads, a six-row no-till planter, a disk, a field cultivator, and a tractor. In the mid-1980s, there was a farm for sale almost every day, and stuff was cheap. It was a bad time for agriculture but a good time to get into business,” he said.

Lundy’s father quit farming in 1986, giving the place back to FHA as so many did during that time period. His uncle rented the home farm from FHA for a couple of years, then, in 1988, Lundy bought it.

Got the hay bug

“What I really like about hay is that you can be rewarded for the job you do,” Lundy said.
“My uncle had always done some small square bales with an old New Holland baler and an equally old Farmhand accumulator,” Lundy said. “When I rented my great uncle’s farm in 1986, he had 40 acres of good alfalfa, and my uncle suggested I should square bale it and sell the hay. It was a horrible experience. Nothing worked, but I still kind of liked it because it was something different. I’ve always been the type to zig when everyone else was zagging,” he added.

Lundy started seeding some of his own farm down to alfalfa. In 1988, an excessive drought year, Lundy bought some additional hay equipment in partnership with his cousin and uncle, including a more reliable small square baler and a New Holland pull-type bale wagon. They rented 240 acres of Conservation Reserve Program (CRP) land that was released early that dry year. It was a new seeding of alfalfa with a little grass.

“That was my first dive into big-time haymaking, but we were still baling small squares,” Lundy explained. “We stacked the bales on the edge of the field and didn’t even tarp it because it never rained that year. Then, we sold it right from the stacks.”

For Lundy, making hay off that CRP land changed the course of his farming operation for years to come.

“That experience really gave me the hay bug,” Lundy said. “I seeded more of my own farm down to alfalfa and bought my own small square baler and a self-propelled New Holland bale wagon. By 1993, we were making 350 acres of small squares. That was a wet year, and I don’t think we made one good bale of hay the entire summer. I decided that year I was going to switch to big squares, and if the banker didn’t go with me, then I was going to quit making hay.” Fortunately, that didn’t happen.

“What I really like about hay is that you can be rewarded for the job you do,” Lundy reflected. “With corn and soybeans, the price being offered is the same for everyone.” 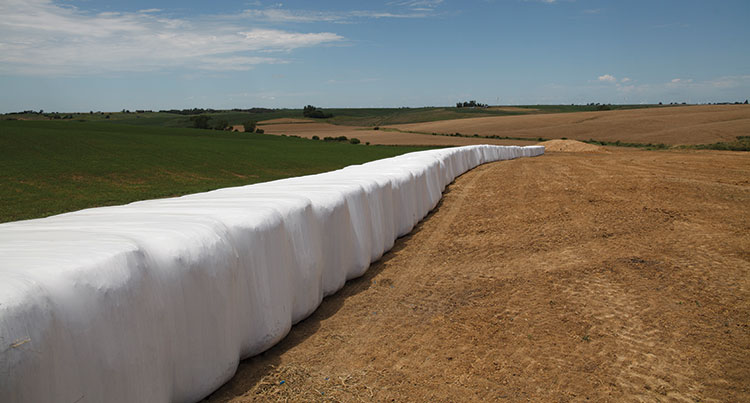 Baleage has better enabled Dennis Lundy to meet the forage quality demands of his dairy customers. Bales are wrapped edge-to-edge with an in-line wrapper and stored in long rows.

Lundy’s haymaking enterprise had become a fine-tuned, profitable machine. Then, 2008 rolled around. It was an extremely wet year and making dairy-quality dry hay was a real challenge.

“Even after 2009 we were just plugging along and struggled to make dairy-quality hay, except for a dry 2012 when it was all Premium or Supreme quality. Overall, we weren’t losing money, but we also weren’t gaining,” he added.

Something had to change, and Lundy took another zig.

“We started having trouble meeting the demands of our dairy customers,” Lundy said. “One of them suggested that we look into chopping, storing the haylage in bags, and then hauling it to them as they needed it. That route would have involved a whole new line of equipment, so I started to consider baleage.”

Five years ago, Lundy started the conversion to baleage so he could make wetter hay if weather conditions dictated such a need. To start, he bought a wrapper and an older baler with a precutter, which his existing balers didn’t have.

“We began a 30-day experiment with one of our dairy customers,” Lundy explained. “The first year was a disaster from the standpoint of things going wrong. The baler was constantly plugging with wetter hay, and I lost a good employee at year’s end because of all the frustrations. However, we did put up some really nice baleage that first year, and the dairy had great success with it,” he added.

Lundy uses an in-line wrapper for his large square bales. “I did a lot of research on that decision,” said the thoughtful Iowa haymaker whose wife is an elementary school principal. “I talked to a couple of guys who told me that individual bale wrapping is the only way to go. Then I talked to a couple of dairy farmers in Wisconsin who said in-line wrapping works fine if the rows are made as long as possible in a north-south orientation.”

The dairies that Lundy supplies baleage to feed it fast enough that he just takes the plastic off and loads the bales the same as is done for dry bales. They want the baleage at 55% to 65% moisture.

Lundy started making baleage with a 4x4 baler that he bought on an online auction “dirt cheap,” but he has since reverted back to 3x4 balers. “I really liked the 4x4 bales for what we were doing, but it was tough to get a really dense bale with wet hay,” he explained.

Lundy doesn’t use any inoculant on his baleage that gets wrapped in nine layers of plastic. The 3x4 bales are wrapped and stored edge-to-edge to gain efficiency with the plastic. “We wrap everything right away. If wrapping gets four hours behind the baler, I start getting nervous. Once we start baling, we don’t quit wrapping.”

Both dry hay and baleage are priced based on RFQ. Lundy pulls samples on his baleage and dry hay as it’s going into the hay barn or before it is wrapped.

“Everything is tested,” Lundy said. “I used to pull the baleage samples after fermentation, but I hated putting holes in the plastic and then retaping. Plus, it was a lot of work,” he added. 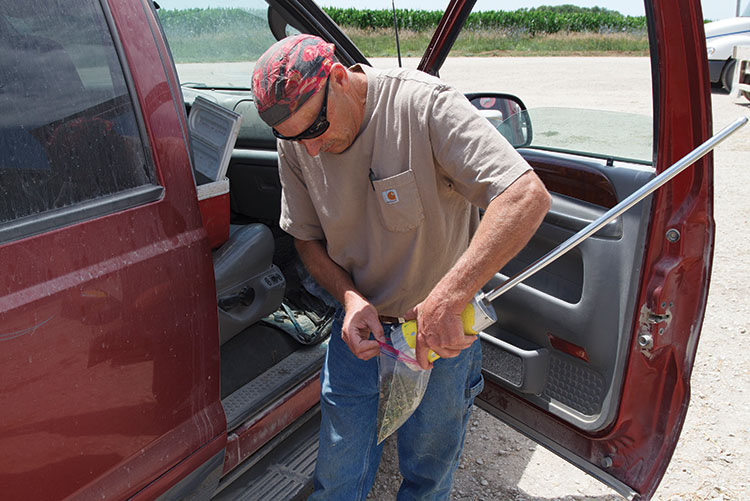 Lundy pulls forage samples on every lot of hay or baleage before it is put into the barn or wrapped.

Currently, Lundy farms 1,200 acres of alfalfa and another 1,200 acres of row crops and small grains. He bales and sells the straw from the small grains, which may be either winter wheat or winter rye. A typical crop rotation is corn-soybean-small grain-alfalfa. The alfalfa is usually seeded in the late summer after the winter cereal harvest and are kept for three production years.

Lundy currently uses two mower-conditioners, three hydraulic basket rakes, and two 3x4 Massey Ferguson balers with precutters to harvest his hay. He generally gets five cuttings of alfalfa per year with one taken in the fall (September or October).

Lundy has always no-tilled his corn and soybeans, but for the last 10 years he has been no-tilling all of his crop acres, including alfalfa. He uses a John Deere 1990 air seeder. “We’ve always got the ground covered,” Lundy said. “We even seed wheat or rye after corn harvest as a cover crop and then spray it out once the soybeans are up.” 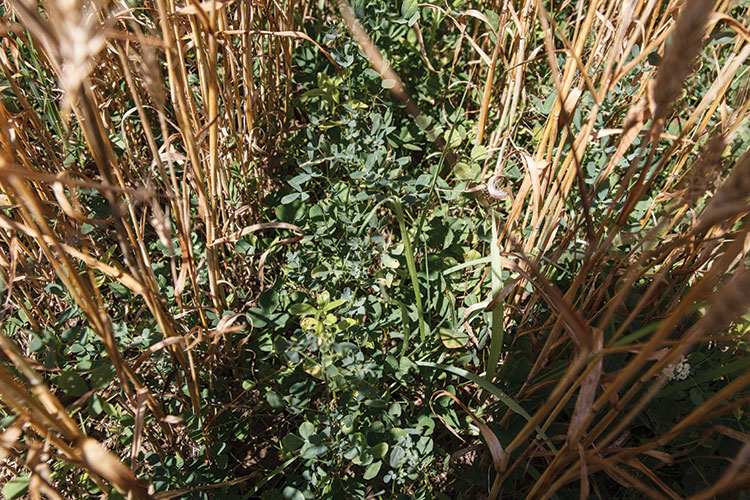 If late-summer seedings fail, alfalfa is sometimes seeded into winter wheat stands during the spring.

If given a choice, Lundy prefers seeding his alfalfa during late summer (mid-August). By doing so, he avoids the low seeding-year production that comes with a spring-seeded crop. “Late summer alfalfa seedings aren’t fool proof,” he admits. “I’ve lost stands because it was too dry, and I’ve lost stands because it was too wet. When seeding in the late summer after wheat, we usually have to spray for volunteer wheat in the fall. If you don’t, it will kill out the alfalfa,” he added.

When a late summer-seeded stand is lost, Lundy just reverts to another zig. Two years ago, he tried something new by spring seeding alfalfa into a stand of winter wheat. This past year, he did the same thing on even more acres after some failed late-summer seedings. “It seems to work pretty good,” Lundy said. “You can’t do it into rye; it’s too competitive, and you have to use short-stature wheat varieties.”

Commenting on his alfalfa variety selection process, Lundy noted that the last eight years he has planted nothing but Dairyland Seeds’ hybrid alfalfa. “I actually like the fact that the seed isn’t coated, and I have some customers who can’t feed any GMOs, so I just don’t use any Roundup Ready varieties. I also want a break from glyphosate use because I do plant Roundup Ready soybeans and corn.”

Lundy is starting to get interest from some of his dairy customers to include some grass in his seeding mixture. That’s something he’s currently researching. But truth be told, this Iowan is always evaluating every phase of his operation. “Weather is definitely our biggest challenge, but we can’t do much about that,” he said. “You have to adapt and change to survive, and for us, baleage has been a renaissance.”

No doubt, there will be more zigs in Lundy’s future.

Ryegrass drives this full-service farm Next

This dairyman calves seasonally . . . in the fall Previous